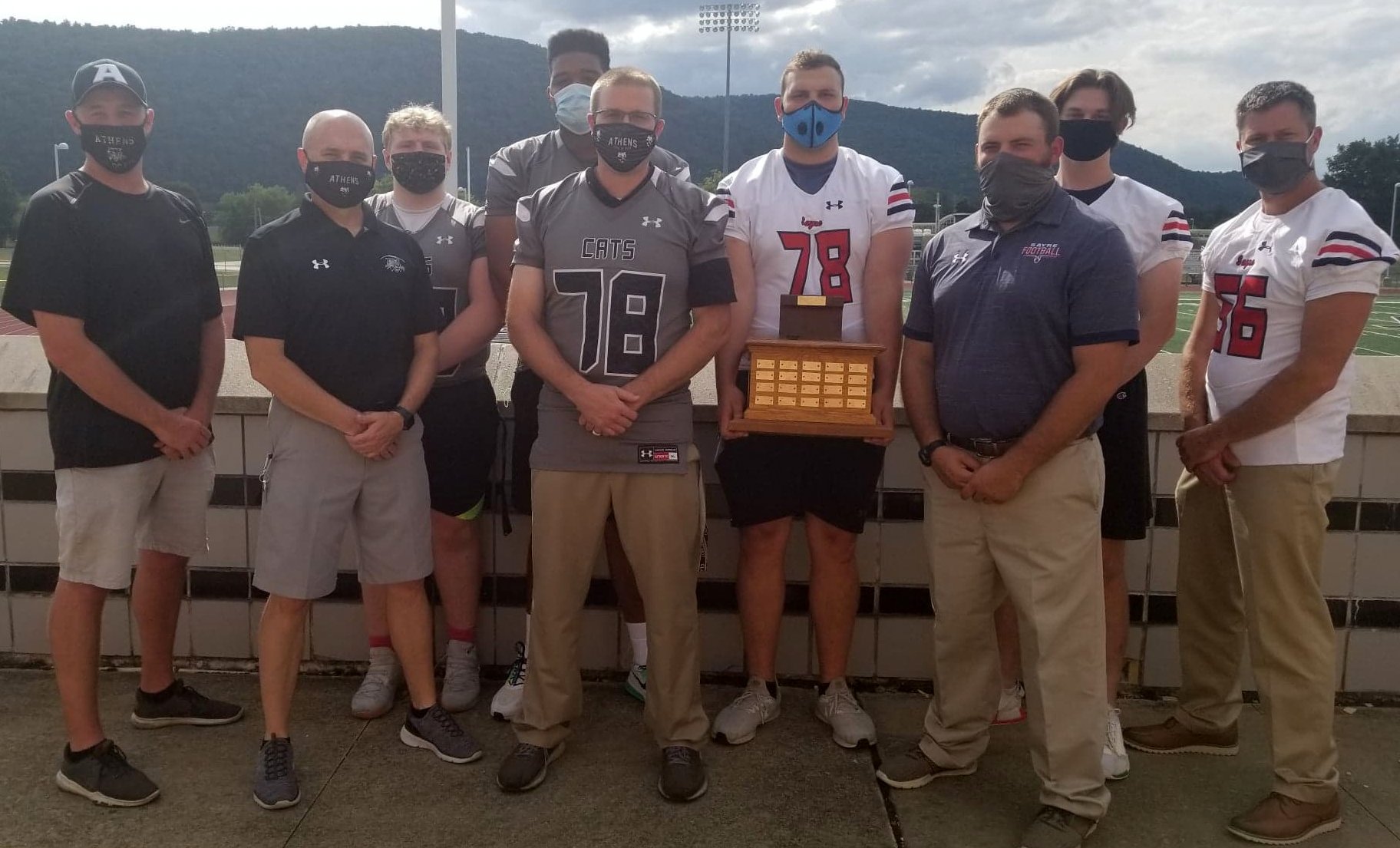 ATHENS — For the first time since 1980, Athens and Sayre will open the season against each other here Friday night at Alumni Stadium.

“I know they talked about playing the rivalry games early in the season to make sure we’d play these games, but I don’t think anyone anticipated Week 1,” said Athens coach Jack Young. “At the same time, our kids would be happy, and I think the Sayre kids would be happy, if we played five weeks in a row — why not?

“It’s been one of those years. When our kids first heard, they thought we were scrimmaging Sayre, so we had to set them straight and get them focused,” added Young. “It’s exciting. Our seniors have set the tone, and said ‘there’s no better way to get it going than opening up with Sayre.”

“It's going to be interesting,” said Sayre coach Kevin Gorman. “The (Rusty Rail) game at the end of the year is always something the players look forward to, but with the uncertainty of everything I understand why it's week one.

“I was hoping for a week 2 or 3 game to give us a game or two to get all the mistakes out of the way, but I'm just looking forward to the season and the game,” added Gorman. “And, the players are excited to play and even more excited for the Rusty Rail week one.”

Both coaches agree playing in the season-opener has kept their players focused.

“The kids probably would have practice all day (Monday)  if we had let them because it’s Sayre week,” said Young. “They’ve been focused and motivated.”

“It’s definitely helped,” said Gorman. “The high schools only being a minute away from each other, the kids all know each other.

“We had a good camp, and I think the kids are pretty focused,” he added.

This is the 120th edition of the Athens-Sayre rivalry, with the Redskins leading the all-time series 61-48-10.

It’s the 21st Rusty Rail game. Athens leads the series 17-3, but Sayre has won the last two games, including a 21-14 win last year at the Lockhart Street Bowl, following on the heels of a 17-game win streak by the Wildcats.

Gorman said his team is not obsessing over its two-game win streak.

“I don’t think the kids are concerned with a win streak, they just know the Rusty Rail is on the line, and we need to get the trophy back to Sayre,” he said. “I think that’s the approach during the week.

“I don’t like to push the Rusty Rail on them. I just want s to go out there and play our game, and, hopefully, come home with a win,” added Gorman.

While Athens’ 17-game win streak is the longest in the rivalry, Sayre has twice put together 10-game win streaks against Athens. The first was from 1922-26 when the two schools played twice a year, and from 1933-40, which also included a few years with two games.

The two schools played at least once every year through 1936. After two years off, they renewed the rivalry in 1939 and have played every year since, aside from 1965 through 1968, when the rivalry was put on hiatus due to incidents of school vandalism.

The Redskins are coming off an 8-3 season, which ended with a 26-20 home loss to Muncy in the District 4, Class A semifinals.

The Wildcats were 1-10 in 2019, including back-to-back season-ending losses to Sayre and Waverly.

Both coaches believe Friday’s game boils down to one simple thing.

“If you control the line-of-scrimmage on either side of the ball, you’re more than likely winning the game,” said Gorman.

“We’ve talked about it all week, winning the battle on the line-of-scrimmage is huge,” said Young.

WHEN ATHENS HAS THE BALL
“They have a big offensive line, so I expect to see a healthy dose of Shayne Reid, who is a good back,” said Gorman. “He hurt us quite a bit last year. When you watch films from last year, you see he hurt a lot of teams.

“They have (J.J.) Babcock on the outside, and Mason Lister can throw it around a little bit,” noted Gorman. “They may get in shotgun, and throw it around to get the ball to some of their athletes.

“I expect the run game first, then for them to drop back and try to catch us napping with a pass over the top, or something quick,” added Gorman.

WHEN SAYRE IS ON DEFENSE
“They do a great job of covering the field,” said Young. “We think we see something, and they adjust quickly. Kevin (Gorman) does a nice job of getting their kids disciplined defensively.

“They play well as a unit defensively,” added Young. “We have to be patient offensively. We have to see what we can take, then take advantage of it and produce.”

WHEN SAYRE HAS THE BALL
”I don’t think they’re going to be any different than the Sayre teams we’ve seen the last couple of years,” said Young. “They are going to formation us, they’re going to spread the field, wanting to run the ball, and chuck it downfield.”

WHEN ATHENS IS ON DEFENSE
“They run the 4-3, and they run it well — they know what they’re doing,” said Gorman. “They do run man, and might mix in a little Cover-3.

“Their defensive line is big,” noted Gorman. “The key point for us, with our experienced offensive line, is to control the front to keep Lucas (Horton) clean when we’re passing, and to open run lanes for our backs — that definitely will be a big factor for us.

“With it being the first game, they could have been working on something different offensively or defensively for the whole camp, or summer, and all of the sudden they give us a new look, but I expect the 4-3,” added Gorman.