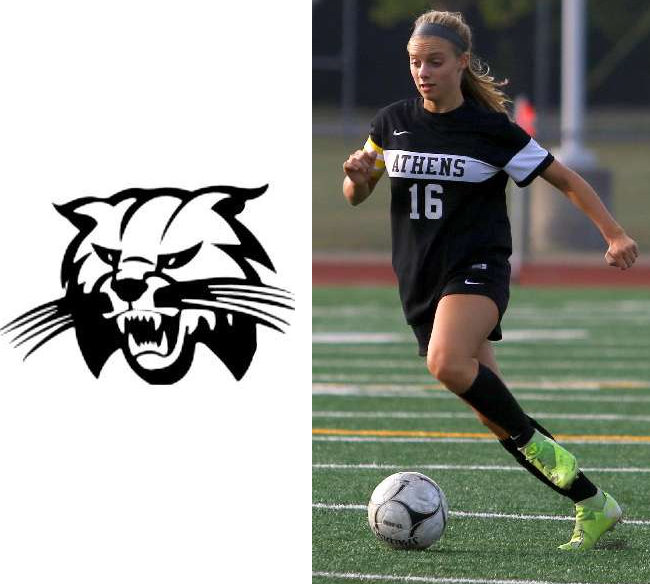 EAST TROY — Senior Emma Roe scored in the 16th minute, and the Athens defense made it stand up in a 1-0 win over Troy here in NTL girls soccer action on a rainy Tuesday afternoon.

The win is a bit of redemption for the Lady Wildcats, who dropped a 2-1 decision to Troy at home Saturday.

“I thought we played a really tough scrappy game tonight in a tough place to play,” said Athens coach Rich Pitts. “The girls really sacrificed their bodies tonight to pull out a huge win.

“And, we needed to win to, hopefully, pull off a home game in districts,” Pitts added, noting his team is currently the second seed in Class AAA standings.

With 24:06 remaining in the first half, sophomore Ally Thoman played a through ball from the corner, and Roe drove a shot into the net for the game’s only goal.

“Roe and Ally (Thoman) really put a lot of pressure on Troy's back line with speed and passing, including a great link up for the goal,” said Pitts.

The Athens coach said it was a complete team effort against a good Troy team.

“Hannah Blackman really did a great job putting girls in the best spots to be successful,” he said. “Her voice is so amazing and the information she gives is always spot on.

“Mya Thompson did everything asked of her in multiple positions,” said Pitts. “She has been a great addition for us this year.  She works so hard and did a great job marking (Nicole) McClellan the last 15 (minutes) of the game.

And, Taylar Fisher and Norah Reid helped our back line shut down their speedy forwards by doubling them,” noted Pitts. “Mia Robinson, (Hannah) Walker, Teagan (Williams) and Kaylee (Grazul) were awesome all night dealing with the pressure they put on us.”

“I’m super-happy getting the win tonight, and now on to districts,” added Pitts.

Athens had a 9-8 edge in shots-on-goal, while Troy had a 6-3 advantage in corner kicks.

Olivia Tate had six save in net for Troy, while sophomore Abby Champion had three for Athens.

Athens wraps up the regular season at 9-2-1.