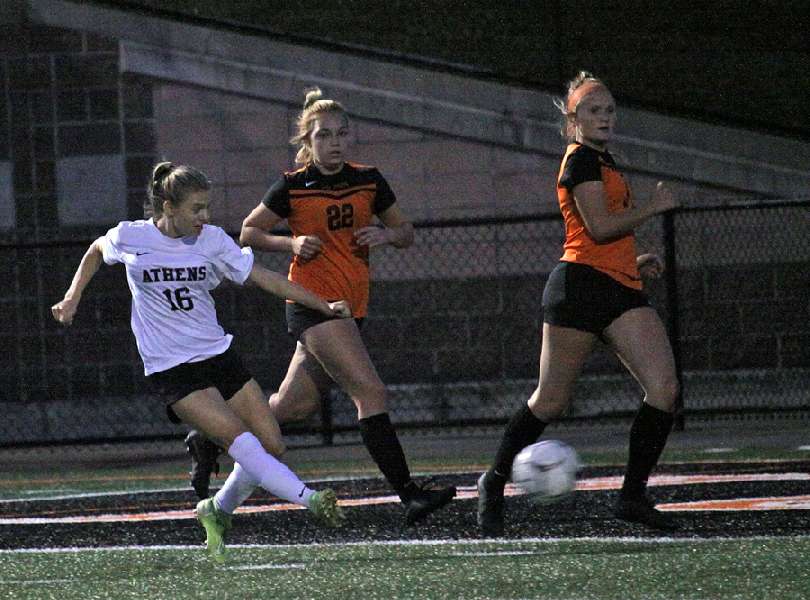 TOWANDA — Athens got back on the winning track Wednesday night after its first league loss in nearly five years, but it wasn’t easy.

After battling to a 1-1 tie through the first 40 minutes, senior Emma Roe beat a pair of Towanda defenders to score what ended up being the game-winning goal early in the second half, lifting Athens to a 2-1 win here at the Endless Mountains Sports Complex.

Athens, which dropped a 2-1 decision at Wyalusing Monday, had the first good scoring chance of the evening came with 17:06 left in the first half as Roe found sophomore Ally Thoman deep in the box. Her shot was wide, though, keeping it 0-0.

Then, at the 16:25 mark, Roe scored her first goal. She had a run down the right side of the field, cut in and put it past Towanda keeper Erin Barrett with a low shot to the far corner.

Towanda answered with 3:33 remaining in the first half when Olivia Sparbanie made a long run of her own down the right side and hit a long shot just over Athens keeper Abby Champion’s finger tips to make it 1-1.

Athens had two more good opportunities to score before the intermission, but Barrett answered the call.

Moments after the game-tying goal, Roe found Thoman again deep in the box, but Barrett reacted quickly to the shot and scooped up the ball.
Then, with just under two minutes to play, Roe had a hard shot deflected that Barrett was able to clean up.

Athens put the pressure on Towanda early in the second half.

In the opening minutes, Athens had an indirect kick from just outside the box, but the Towanda defense held.

With 27:42 remaining in the contest, Roe made another strong run, cutting past two defenders, and hitting a shot inside the far post to make it 2-1.

The Lady Knights had two good scoring chances, but Champion and the defense preserved the win.

With 18:45 remaining to play, a Towanda corner kick sailed just over the crossbar. Then, with 1 minute on the clock they had another corner kick — Porschia Bennett put it on the far side of the box to Sparbanie, but her shot went high.

Barrett had 11 saves in net for Towanda, and Champion had five saves for Athens.