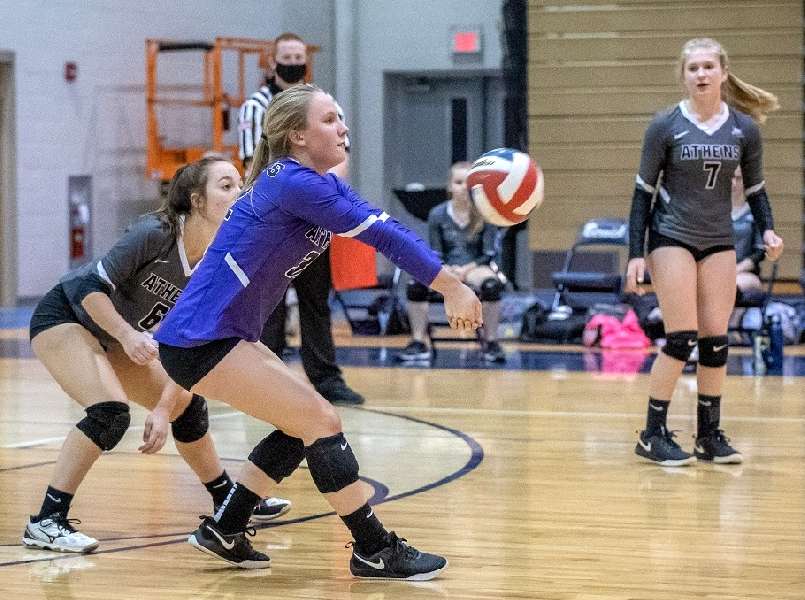 “It was definitely different than anything we’ve experienced this year,” said Athens coach Heather Hanson of Isenberg’s presence in the middle. “That’s the first team we’ve faced that very strong in the middle.

“We knew that coming in, though, I think we just weren’t use to playing against that,” she added. “And, we were much too timid.”

Isenberg’s presence in the middle also helped Steeber on the outside.

“(Berwick) has a great offense,” said Hanson. “I’ve been trying to get my girls to do tandems, which is faking — going in and being convincing that you’re holding the block, so the outside (hitter) can have an opening.

“Berwick did that to us all night,” she noted. “They used their middles, so our middles would stay with their middles, then they set outside. It was good stuff for them.

“(Steeber) had good looks,” added Hanson. “She either had a single block, or a hole in the block. Berwick just ran a great offense.”

Berwick controlled the first set from the outset, taking an 8-1 lead early. Athens trimmed the deficit to 11-7, but the Lady Bulldogs quickly stretched their advantage to 16-8, then 24-11 with a pair of long service runs.

“They got some run on us, and all the sudden we couldn’t pass,” said Hanson. “I could feel the nerves the first game. It was a different atmosphere, and a big stage — it was different.”

Athens used a pair of service points by junior Taylor Walker to take a 3-1 lead early in the second set — their first lead of the night, and led 4-3, but a five-point service run gave the Lady Bulldogs the lead, and they never trailed again.

The Lady Wildcats tied the set at 9-9, and trailed 11-10, but at 14-11, sophomore Camille Pinterich reeled off nine straight points, which included three service aces and two kills and two blocks by Isenberg, to take a commanding 23-11 lead.

Athens played its best volleyball in the third set, leading 15-14 before Berwick took over.

“The girls never gave up,” said Hanson. “We played much better in the third (set).”

“Thank God for Taylor Field tonight,” said Hanson. “She did not let a ball hit the floor, without putting her whole body out there.”

Hanson tipped her cap to Berwick, but doesn’t believe her team played its best.

“I have a tough time saying any other team is good, but they were very good,” said Hanson. “They had a winning mentality, and didn’t let us go on any runs.

Hanson’s Lady Wildcats, playing in the program’s first District finals since 2005, end the season at 12-7.

“I am so proud of these girls,” she said. “There were many, many times we could have been done, and they kept fighting.

““We’ve had the craziest schedule I’ve ever experienced in my entire life,” noted Hanson. “There were times I didn’t want to go to a game — it was like ‘another road trip, back-to-back-to-back,’ but the girls said ‘let’s do this.’ It was tough, but the girls were strong.

“They were pumped for this volleyball season,” added Hanson. “They set goals and they achieved nearly all of them.”

“It’s going to be very tough to lose this whole group of girls.

“They have set a new standard for Athens volleyball, that’s for sure,” added Hanson.

The Lady Wildcats return just three players — Walker, Ryan, and Martin — in 2021. Despite a sub-.500 record, Hanson believes she’ll have the talent she needs from the JV team to keep the program on the winning track.

“I see tons of potential.

“First, it all about who’s going show up in the offseason,” said Hanson. “And, what are going to be able to do? What is Covid going to let us do?

“Once that’s all clear and we get back to close to normal, and I can have open gyms, there is a ton of potential on that JV team to work with, it just didn’t come together this year.

“I know I have my work cut out for me, but I love underdog stories,” added Hanson. “I love a challenge.”