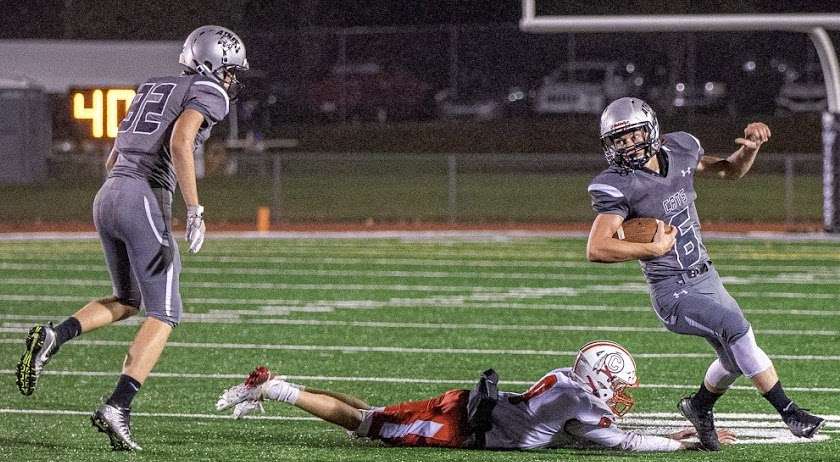 ATHENS — It took a couple of series to shake off the rust — the result of not playing a game in 31 days, but once Canton hit its stride, it put together a convincing performance in a 33-9 win over Athens here Monday night in NTL Large School football action at Alumni Stadium.

“We were rusty, which I’m not happy about, but I guess it had to be expected,” said Canton coach Tyler Sechrist. “We haven’t played in a month, and we only had three practices before this game.

“Once we got rolling, I was happy with the way we played,” added Sechrist.

“They are a good football team, there’s no doubt. They are well-coached, and have some talented kids,” said Athens coach Jack Young. “But, we did some things that are out of character for us, and it’s tough to compete against a team like Canton when you do those types of things.”

The Warriors opened the game with the ball, but a block-in-the-back penalty and a QB sack by seniors Athens Tanner Dildine and Caleb Houseknecht left them in a fourth-and-30 hole.

The Wildcats took over at their own 40 following a Canton punt, and quickly moved into Warrior territory as sophomore QB Mason Lister connected with junior Shayne Reid on a 12-yard completion, and junior Karter Rude on a 17-yard pick-up.

The drive bogged down after Lister could not handle a high shotgun snap, and the Wildcats were forced to punt.

Junior Caleb Nichols’ punt went out-of-bounds at the Canton 18, and the Warriors fumbled the ball away on their first play, giving the Wildcats the ball just 16 yards from paydirt.

The Canton defense, however, limited Athens to just three yards on three plays, forcing the Wildcats to attempt a field goal. Reid spilt the uprights from 30 yards out to give Athens a 3-0 lead with 6:23 remaining in the first quarter.

The rest of the first half was all Canton as they scored on their next three possessions, and added a defensive score on an odd play as time expired.

“Athens came out strong,” said Sechrist. “They were pretty tough the first series against the run, but I think we wore some of those big guys down a little bit. We just kept after them.

“I was happy with our two backs, and the way the (offensive) line came back answered,” he added.

“Canton definitely got some momentum off that stop,” said Young. “You would think the momentum would have been on our side at that point, but it wasn’t.

“From there on, it was just too many negatives,” added Young. “We missed on two scoring opportunities in the first half, and there were too many negatives. When the negatives outweigh the positives, it’s tough to compete.”

Jared Peterson returned the ensuing kickoff 30 yards to midfield, but the Warriors forced a punt after just three plays. Nichols’ punt bounced through the end zone, giving Canton the ball at its 20.

Runs of 20 yards by junior QB Cooper Kitchen, and 25 yards by Parker quickly moved the ball to the Wildcat 35. Five plays later, Kitchen connected with 6-5 tight end Ben Knapp on a 15-yard TD pass to make it 13-3 with 9:01 remaining in the first half.

Disaster struck for the Wildcats on the ensuing kickoff as Ward stripped the Athens returner of the ball, then recovered the fumble at the Wildcat 24.

Following a 12-yard run by Ward, Parker covered the final 12 yards on two carries, including an 8-yard TD jaunt with 7:38 remaining. Jannone’s point-after kick made it 20-3.

After an exchange of punts, Athens took over at its 17, and were quickly pinned back inside their 10 following a holding penalty.

Aided by a pair of Canton penalties that accounted for 25 yards, the Wildcats drove the length of the field. Runs of 18 and 10 yards by Lister, and completions from Lister to Rude for 10 and 12 yards were key in the drive.

With time running out, Lister attempted to scramble into the end zone, but he was hit at Canton 5-yard line as time expired. Trying to keep the play alive, Lister flipped the ball backward toward a teammate, but it found the turf, where Canton sophomore Weston Bellows scooped it up at the 17, and raced 83 yards for the score to make it 26-3 at the half.

“That was a huge change of events, it’s not something you usually see,” said Sechrist. “I thought (Athens) was going to score, (but) we end up scooping and scoring right before the half; that was a big part of the outcome.”

“Mason was just trying to make something happen, but those are mistakes we can’t make,” said Young. “It should have been 19-3, and we’re still in it.

“Two of their scores in the first half came off turnovers.,” noted Young. “You take those two away, and it’s a 12-3 game at the half.”

Athens took the second-half kickoff, and thanks to 35 rushing yard by Reid, who also caught a pair of passes for 15 yards, marched into the Canton red zone.

Moments after the ensuing kickoff, the Wildcats caught a big break when a backward pass bounced off the intended Warrior receiver’s shoulder pads, and Rude recovered it at the Canton 22.  An unsportsmanlike conduct call against the Warriors moved the ball half-the-distance to the goal line.

Four plays later, Reid was stopped inches short of a first down at the Canton 1.

“Our defense hung in there a couple times,” said Sechrist.

“We got the stop after the turnover in the third quarter, and we held them to a field goal after a fumble early in the game,” he added. “Those were big, that’s what helps you win football games.”

“We thought we had the first down, but those are the breaks of the game,” said Young. “We’re still OK if we make a quick stop, but on third-and-long, they punch one out there on us, and that was kind of a back-breaker.”

The “back-breaker” was a 15-yard run by Parker on third-and-8 from the Warrior 3.

After a Canton punt, Athens moved the ball to the Warrior 33, but back-to-back sacks by junior Caiden Williams and senior Derek Atherton-Ely ended the threat.

Canton moved the ball into Athens territory, thanks in large part to 29 yards on three carries by Parker, but the Warriors threat ended with their third lost fumble in the contest.

Athens ensuing possession was short-lived as Knapp registered a QB sack, and Williams and freshman Mason Harold combined to haul Lister down behind the line-of-scrimmage to force a turnover on downs.

Parker put the finishing touches on the Warrior win with a 47-yard TD run with 3:23 remaining in the contest.

Lister was sacked six times in the fourth quarter, with senior Evan Landis and freshman Hudson Ward getting to him in the Wildcats’ final possession of the game.

Parker led the Warrior ground game with 176 yards and two TDs on 19 carries, while Hayden Ward added 50 yards on seven carries, and Kitchen chipped in with 25 yards on six carries. As a team, Canton rushed for 254 yards on 36 attempts.

Reid led the Wildcats with 78 rushing yards on 17 carries, and seven receptions for 50 yards.

Lister completed 15 of 29 pass attempts for 121 yards and one TD. Rude had four catches for 40 yards, while sophomore Caleb Nichols had two grabs for 25 yards. Babcock had his 13-yard TD catch, and senior Ben Pernaselli had one reception for seven yards.