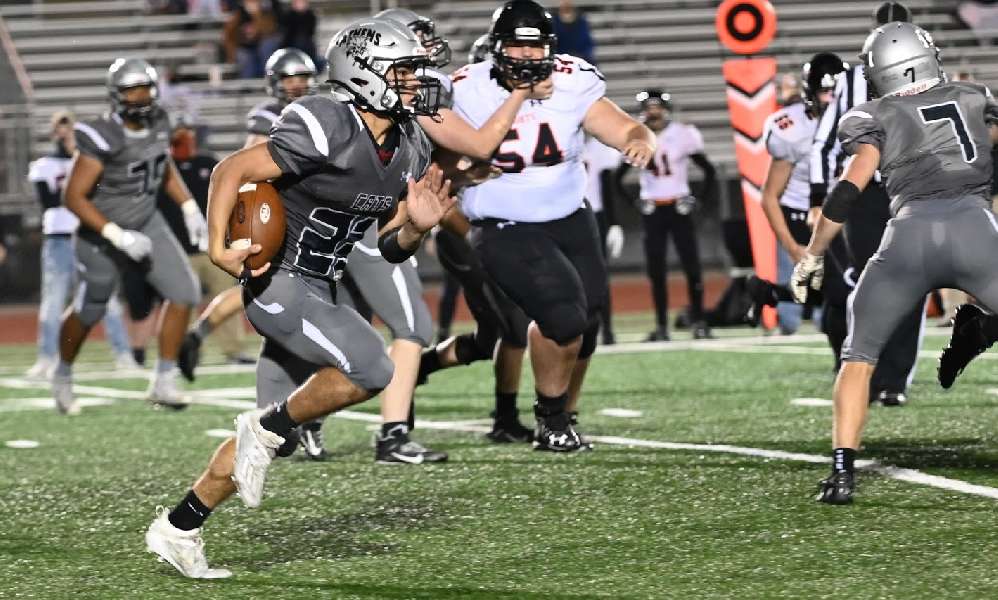 ATHENS — Athens coach Jack Young knew this had the makings of a trap game.

The contest had been moved from Friday to Saturday, then Saturday to Monday. It wasn’t until 9:30 a.m. Monday morning that they had confirmed they were going to play.

Still, his Athens team responded, making the most of five Towanda turnovers to roll to a 44-14 win in NTL football action Monday.

“We talked about taking care of opportunities when we have them, and trying to make opportunities for ourselves,” said Young. “At the same time, we still made some silly mistakes with formations and things like tha,t but I think we’re coming.

“We’re getting better and better and better and, when you play in these circumstances, and Towanda’s played some really solid defense,” added Young. “Once again, I think the line-of-scrimmage was real key for us tonight as it was against Wyalusing.”

The Wildcats dominated on the ground — rushing for 201 yards on 39 carries, led by Shayne Reid’s 108 yards and three touchdowns on 15 carries. But whoever touched the ball did things with it — Caleb Nichols ran for 35 yards on nine carries with a touchdown, and through the air Karter Rude had five catches for 98 yards.

“I’m super proud of the way they’re playing as a group,” said Young. “We’ve got a lot of kids we’re getting on the field and that makes me proud as a coach.”

Under center, Mason Lister was 7-for-17 for 122 yards, while also running for 36 yards and a score on seven carries. JJ Babcock had two catches for 24 yards.

After a flat start, Athens got going as the Knights had four turnovers in the first half, which gave them short fields, and the Wildcats took advantage of them. Then, in the second half they took care of business early to put the game away.

“I couldn’t be prouder of the kids,” said Young. “We came in a little bit early to do some walk-through stuff to make sure our minds were right; again, not a perfect game, but I’m real, real proud of the way we’re playing as a team.”

The Wildcats were flagged 11 times for 55 yards, but didn’t turn the ball over once.

For Towanda, Rhyan West ran for 84 yards on 14 carries with a score while Mitchell Mosier was 5-for-15 for 58 yards with a touchdown and two picks.

The Black Knights took the opening kick-off and seemed to be in business, thanks to an 8-yard run by Benjamin-Fee on second down. A 3-yard rush by Mosier gave them a new set of downs near midfield.

However, Athens bogged down the Towanda offense, holding them to short gains and forcing a punt.

On Athens’ ensuing drive, Lister hit Rude for an 11-yard gain and a new set of downs, but the Towanda defense held, forcing the Wildcats to punt.

Towanda’s second possession began with a 10-yard run by Kithcart to get out to its own 30-yard line. However, two plays later, a Mosier pass was picked off by Jaden Wright, giving Athens the ball back inside the Towanda 40-yard line.

A first-down hold pushed the Wildcats back to midfield, but an 11-yard run by Nichols got the yardage back. An 8-yard pass play of Lister-to-Rude set up third-and-short. Towanda held on third dow,n but Athens’ Reid punched through the line for a new set of downs on fourth down, rumbling to the Towanda 22-yard line.

He followed that up with a 15-yard run inside the 10-yard line. Two plays later, Lister rolled out left and dove just inside the pylon for the touchdown, finishing off the 49-yard, 7-play scoring drive.

Reid added the point-after for the 7-0 lead with 1:07 left in the first quarter.

On Towanda’s ensuing drive, back-to-back runs by West and Mosier set up third-and-short, but Athens broke through the line and forced Kithcart to fumble the ball. It was scooped up by the Wildcats, and they set up shot at Towanda’s own 31-yard line.

Once again the drive start with a penalty — this one illegal procedure, but an 11-yard run by Lister got the yardage back. Two shorts runs by Nichols and Lister got them a new set of downs.

A false start backed them up again, but Lister hit Babcock with a 7-yard pass play to get inside the Towanda red zone.

Towanda’s ensuing drive ended with another turnover, as on third down they fumbled the ball back to Athens.

The Wildcats took over at Towanda’s 37-yard line, but the Knights continued to play stingy defense. After a first-down incompletion, Towanda held Reid to short gains on the next two downs to set up a 4th-and-2 at the 20-yard line.

Athens went back to Reid, who punched through for a 5-yard gain and a new set of downs. Towanda’s defense held up, though, forcing Athens two two more short runs and an incompletion. On 4th-and-5 from the Towanda 7-yard line the Wildcats elected for a field goal and Reid hit the 24-yarder to make it 17-0 with 3:50 left in the half.

On the ensuing kick-off, Towanda fumbled again and Athens recovered at the Knight 22-yard line.

It would take them two plays to find pay dirt — a 21-yard pass play from Lister to Rude, followed by a Reid 1-yard plunge. Athens tried a fake PAT on the point-after attempt, but it was no good. Still, they led 23-7 with 3:13 let in the first half.

The ensuing Knight possession started promising as West broke four Athens tackles at the line-of-scrimmage as he rumbled 29 yards down the left side of the field. However, a short gain and two incompletions later and Towanda was punting again.

Athens took over at their 38-yard line, but struggled as well. They would turn it over on downs as lister went 0-for-3 on the drive.

With 1:06 left on the clock and starting at the Athens 45-yard line Towanda wouldn’t get a better chance to put points up on the scoreboard.

They took it, as on second down Mosier hit Benjamin-Fee on a crossing pattern. He out ran most of the Athens defense with Reid saving a touchdown as he tackled Benjamin-Fee at the 4-yard line.

The Wildcat defense would catch Towanda for a 3-yard loss on the next play, while Mosier’s second-down pass to Kithcart was well defended by the official, who inadvertently blocked Kithcart from making the catch.

However, on the next play Towanda finally got a good bounce as Mosier’s pass intended for Kithcart was deflected into the air, but came down into the hands of Justin Schoonover.

The 4-yard completion was the Knights’ first score of the season and, after Logan Lambert’s point after, Towanda cut it to 23-7 with 21 seconds left in the half. It was a 45-yard, 5-play scoring drive.

Athens came out strong in the second half, taking the ensuing kickoff and going 74 yards on seven plays to paydirt. A pitch two Reid on the first play netted 32 yards to get to midfield. An 11-yard Lister run followed, with Nichols then rumbling six yards for a new set of downs at the Towanda 30-yard line.

Lister then hit Rude for a 15-yard pass play. That was followed by back-to-back 6-yard runs to set up first-and-goal at the 3-yard line. Reid punched it in and, after Reid’s point-after, Athens led 30-7 with 8:32 left in the third quarter.

On Towanda’s ensuing drive Mosier did a good job keeping it alive, running for 8-yards on 3rd-and-1, but on the next play he was picked off by Nichols, who returned it to the Towanda 5-yard line.

Back-to-back Nichols runs got Athens to the end zone. Reid hit the point-after and the Wildcats now led 37-7 with 5:38 left in the third.

Towanda’s next drive began with two strong runs by West and Kithcart, which ended in a new set of downs at their own 41-yard line, but it stalled out there and the Knights were forced to punt.

Penalties killed Athens’ ensuing drive as a block-in-the-back and delay of game set up a 3rd-and-19. Lister hit Babcock for a 17-yard gain, which set up 4th-and-2.

On the fourth-down run by Nichols, though, Towanda’s Clay Watkins made a big stop at the line-of-scrimmage and forced a turnover on downs.

A 9-yard run on second down by West got Towanda across midfield, but back-to-back negative runs by the Knights forced a turnover on downs on them.

Athens took over at their own 44 yard line and, on the second play from scrimmage, Lister hit Rude for a 43-yard gain down to the Towanda 11-yard line.

Three plays later, on 3rd-and-3 from the 4, Athens’ Jared Peterson punched it in for their final touchdown of the night. Reid added the point-after and the Wildcats led 44-7, after the 56-yard, 5-play drive with 10:04 left in the game.

Towanda had one final drive left in them and, starting on their own 30-yard line, took nine plays to go the 70 yards to pay dirt.

Runs of 13 and 15 yards by West set up Towanda inside the Athens 40-yard line. A Kithcart 7-yard run on second down made it 3rd-and-5. Mosier would hit Schoonover for a 4-yard gain, making it 4th-and a long 1.

Mosier drew the Athens defense offsides, giving them a new set of downs at the 23-yard line. After an incompletion on first down, a bad snapped on second looked like a busted play, but West made something of it, picking up the rolling ball and darting his way through the Wildcat defense for a 23-yard touchdown run.

Lambert hit the point-after and it was now a 44-14 game, which is how it would end.

Athens’ NTL ‘North’ schedule is done — they get a bye this week, then host South Williamsport the following Friday. But, if this season has shown anything, it’s that tomorrow isn’t certain.

“We’re going to go one thing at a time,” said Young. “That’s what we talked about Friday. Whenever that next opportunity is. we have to make sure we’re as prepared as possible, and the kids are doing a great job handling the stresses of that. They really are, I couldn’t be prouder of the group of kids right now.”
FOR MORE PHOTOS of this game, visit Valley Sports Report.