ANOTHER COMEBACK WIN! ATHENS RALLIES IN FOURTH TO EDGE WYALUSING, 52-51 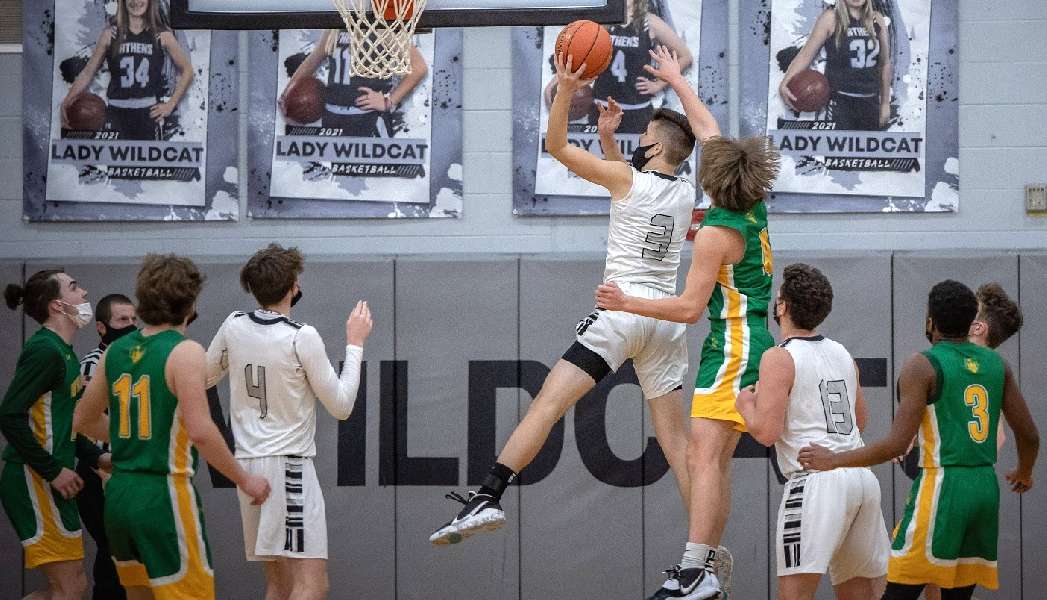 ATHENS — Junior J.J. Babcock scored 11 points in the final 3 1/2 minutes of the game, including a pair of free throws with 10.2 seconds remaining, to help Athens erase a nine-point deficit, and post a 52-51 win over Wyalusing here Friday night in NTL boys basketball action.

“J.J (Babcock) took over at the end,” said Athens coach Jim Lister. “He has a lot of God-given talent, and he’s a hell of a player.”

The win marks the second Friday in a row, the Wildcats needed a major fourth-quarter comeback. Last week, Athens trailed Wellsboro by 16 with 5:07 remaining, and rallied for a 54-53 win.

“It’s frustrating. It’s like we struggle for 3 1/2 quarters, then we wake up. This is the third time this has happened,” he said.

“We did not play very good basketball, but the one thing I will say about these kids is, they don’t quit — they play right to the very end.

“I wish I had the answers, but it seems to come together in the fourth quarter,” added Lister.

Junior Tucker Brown, off a feed from Babcock, gave Athens a 2-1 with 6:49 remaining in the first quarter. It would be the Wildcats’ only lead until the final minute of the game.

A bucket by Babcock, an old-fashioned three-point play by junior Troy Pritchard, and a free throw by Brown trimmed the lead to 14-13 with 2:03 left in the first quarter, but the Rams closed the quarter with a 6-0 spurt, capped by a 3-pointer by Moss to make it 20-13 after the first eight minutes.

Lister and Babcock, off a nifty pick-and-roll with Brown, scored buckets to open the second quarter, and trim the deficit to 20-17.

The teams traded scores until Isaiah Way knocked down a shot in the lane to give the Rams a 28-23 lead with 4:20 left in the first half.

Way added four free throws, and Kashawn Cameron scored on a driving lay-up to complete an 8-2 first-half ending spurt that sent the Rams to the halftime locker room with a 34-25 lead.

Lister credited Wyalusing for its patient offense in the first half.

“They run that weave at the top (of the key), and try to get you to fall asleep,” he said. “They make you play defense, and when you take a second off, they cut to the lane, or kick it out.

“We worked on it at practice for an hour last night, and we still struggled with it.

“(In the first half) I was just trying to find the right combination that would work,” added Lister. “Honestly, what worked in the fourth quarter was full-court man-to-man; that’s what got us back in the game.”

Lister also pointed to his team’s shooting woes in the first half. The ‘Cats made 8 of 32 shots (25 percent) from the field.

“We had good, high-percentage shots in the first half,” he said. “We just weren’t making them. We were missing lay-ups, the shots we have to make, we weren’t making.”

A driving lay-up by Mitchell Burke midway through the third quarter gave Wyalusing its biggest lead of the game, at 49-37.

A conventional three-point play by Babcock, and a free throw by junior Nalen Carling trimmed the deficit to 49-41 with 54 seconds remaining, but a driving lay-up Burke pushed the lead back to 10.

A point-blank jumper by Pritchard with 20 seconds remaining, pulled Athens within eight points, at 41-33, entering the fourth quarter.

A pair of free throws by Abram Bennett gave Wyalusing a 48-37 lead with 4:14 remaining, but Burke fouled out of the game 13 seconds later, and the Wildcats closed the game with a 15-3 blitz.

“Credit Athens, it was a great effort to get back in the game,” said Wyalusing coach Brent Keyes.

“When the game got going up-and-down, we got in foul trouble, and it took some of our leadership off the floor,”” he noted.

“We got sped up, and turned the ball over,” added Keyes. “We gave too many possessions away in the second half.”

Babcock started the run with a short jumper with 3:30 left in the game. After a pair of Wyalusing turnovers, Babcock scored on a baseline drive, and added a free throw to complete the three-point play, trimming the deficit to 48-42 with 2:59 left in the game.

After a Wyalusing time out, Babcock came up with a steal in the Ram end, and scored on a breakaway lay-up to make it 48-44 with 2:21 left in the game.

Following another Wyalusing turnover, Brown was fouled on a drive to the bucket, and converted both free throws to trim the deficit to 48-46 with 1:53 remaining.

After both teams came up with defensive stops, Babcock recorded a steal, and found Carling in the lane with a shovel pass for an open jumper to tie the game at 48-48 with 1:04 remaining.

With both teams in the double-bonus, Bennett made 1 of 2 free throws with 57 seconds remaining, but Babcock tipped in an Athens miss16 seconds later to give the Wildcats a 50-49 lead.

With 29.7 seconds remaining, Way went to the line and drained a pair of free throws to give the Rams a 51-50 lead.

With 10.7 seconds remaining, Brown found Babcock open in the lane, and he was fouled. Babcock drained both free throws to provide the final margin, but the game didn’t end without a bit more drama.

Wyalusing in-bounded the ball, and called timeout when it cleared half court with 4.3 seconds. After the time out, a baseline jumper by the Rams was long, and Blake Morningstar was johnny-on-the-spot on the weak side with an offensive rebound, but his short jumper spun off the rim as the buzzer sounded.

Way led a balanced Wyalusing attack with 12 points, six rebounds, and one blocked shot, while Burke had 11 points and four rebounds, and Moss scored seven points.