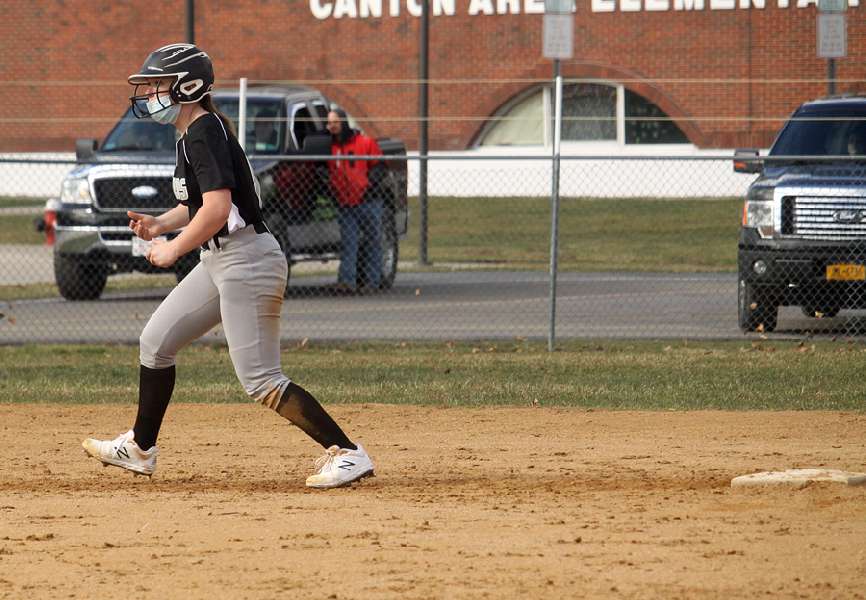 With the 2020 season canceled due to the Covid-19 pandemic, it was the first game for the Lady Wildcats since May 24, 2019 — a 3-2 loss to Bloomsburg in the District 4, Class AAA quarterfinals.

“It was nice to get back out there,” said Athens coach Mickey Farrell. “The atmosphere was electric, everybody was happy to be playing.

“I’m just glad the kids got a chance to play. We had a lot of fun,” he added. “To get the win was just icing on the cake.”

With a large group of sophomores and freshmen on the roster, the Lady Wildcats entered the game with little varsity experience.

“It’s good to get this first win, especially with a team that I had no idea about how it would respond, but the intensity level was there,” said Farrell. “The girls came out and played hard.”

Athens jumped out to a 3-0 lead in the top of the first inning on RBI singles by junior Caydence Macik, sophomore Addy Repsher, and senior Mallory Mummert.

Canton answered with a pair of runs in the home half of the inning to trim the deficit to 3-2.

Senior Megan Collins slugged a two-RBI double in the top of the third to make it 5-2. The Lady Warriors again answered with two runs to slice the lead to 5-4.

In the top of the fourth, senior Audry Hatch ripped a lead-off solo home run, freshman Ashley VanFleet added an RBI single, and Collins drove in a run with a groundout to make it 8-4.

The Lady Wildcats tacked on a run in the top of the fifth inning to make it 9-4.

Canton scored four times in the home half of the sixth, but Macik, on in relief of Repsher, stranded the would-be tying run at third base.

Junior Macie Coyle belted a lead-off double in the top of the seventh inning, and scored on a one-out RBI single by Hatch to give Athens a 10-8 lead.

The Lady Warriors threatened in the bottom of the seventh, but Hatch threw a runner out at the plate, and Macik ended the game with a strikeout to strand runners at first and second.

“Our bats won the game today, there’s no doubt about that,” said Farrell. “A lot of girls got their first varsity hits today.”

Repsher earned the win for the Lady Wildcats, allowing seven runs on nine hits, while striking out four and walking seven in 5 1/3 innings of work.

Macik recorded the save, allowing one run on two hits, while striking out three and walking two in 1 2/3 innings in the circle.

“The reason this team is going to be successful is versatility; we have a number of girls that can play three or four positions,” said Farrell. “When we made the pitching change in the sixth inning, we made five line-up changes; that doesn’t happen on every team.”