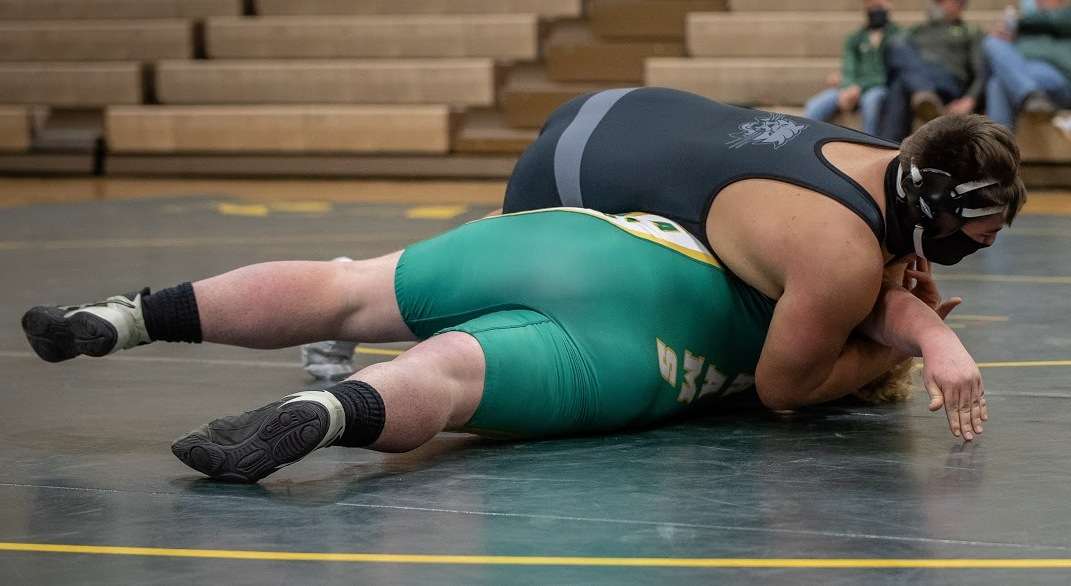 Athens coach Shawn Bradley, who has been with the Wildcat program in one capacity or another for more than two decades, could not recall the last time they had beaten the Rams.

“Honestly, I don’t remember the last time we beat them. It sucks that I have to say that, but it’s true” laughed Bradley. “Hats off to them, they have a good program.

“I told our guys after the match, the difference between this year’s team, and years in the past is that every kid went out there and battled their butt off,” noted Bradley. “There were two matches we should have won, and two more we were in.

“I’m proud of the guys. They are all working hard in the room,” added Bradley. “These guys really pushed themselves, and gave a great effort today.”

A major key to the Athens win was bonus points. Athens scored 13 bonus points to Wyalusing’s one.

“Our guys battled, and kept every match close,” said Bradley.

After an Athens forfeit at 106 pounds, and Wyalusing forfeits at 113 and 120, Gavin Bradley, who placed seventh at Hershey last year, and sixth as a freshman, took the mat against Wyalusing’s Hunter Manahan.

Bradley scored a takedown just 14 seconds into the bout, and rode Manahan for the remainder of the period, unable to turn him for additional points.

Bradley scored a takedown five seconds into the second period, and forced Manahan to his back with a turk for three near-fall points, and a 7-0 lead. He rode top for the final 80 seconds of the period.

Bradley escaped nine seconds into the third period, and scored a takedown 10 seconds later for a 10-0 lead.

Over the next 89 seconds, Bradley cut Manahan loose and scored takedowns until he secured a 20-5 technical fall at 5:56.

“Gavin (Bradley) had to give up 12 pounds, but if we’re going to beat that team, that’s what we have to do,” said Bradley. “We need to rely on our two-time state medalist to get it done, and he did.”

“Gavin wrestled very well,” added Bradley. “The best thing about that win is the kid who beat him first at States last year was about 6-foot tall … (Manahan) is quite a bit taller, so it was good to see Gavin handle him the way he did.”

Jake Courtney was next at 132 pounds for the Wildcats.

He fell behind Owen Hadlock, 4-2, after the first two minutes, but used three takedowns in the second period, including one with 3 seconds remaining following a scramble, to take an 8-6 lead into the final two minutes.

“Jake got a really big win for us. He started slow, but he has a huge gas tank, he has that Courtney gas tank,” said Bradley. “He kept scoring points, and kept wrestling.

“He wrestles hard in practice … now if we can get him to start a little bit faster, he’ll be there with some really good guys,” added Bradley.

With Athens up 23-6, junior Kaden Setzer put on a dominating display with a series of trap-arm tilts for a 16-0 technical fall of Cade McMicken to make it 28-6. The final two-point tilt came at the first-period buzzer.

Skyler Manahan gave the Rams their first win on the mat at 145 pounds, with a 10-2 decision over Lucas Forbes.

Manahan built a 4-0 lead with takedowns in each of the first two periods, and led 4-1 entering the third period after being dinged for a stalling point.

Leading 5-2, Manahan scored a five-point move in the final 10 seconds for the majority decision to trim the Athens lead to 28-10.

At 152 pounds, Wyalusing’s Nick Woodruff earned a hard-fought, 4-2, decision over Chris Bathgate to cut the Wildcat advantage to 28-13.

Woodruff scored a takedown midway through the first period, but Bathgate tied the bout at 2-2 with a reversal with just 18 seconds remaining in the second period.

Woodruff took a 4-2 lead on a takedown with 1:12 remaining in the third period, and was able to ride top for the remainder of the bout.

The Rams crept a bit closer at 160 pounds, thanks to Colbrin Nolan’s 7-5 win over Karter Rude.

After a scoreless first period, Nolan escaped to start the second, but a five-point move by Rude gave him a short-lived, 5-1, lead. Nolan reversed Rude to his back moments later to tie the bout at 5-5.

In the third period, Nolan scored a takedown on a go-behind with 52 seconds remaining, and rode out the remainder of the bout.

At 172 pounds, Wyalusing’s Brian Arnold scored a reversal midway through the second period to take a 2-0 lead, but Zach Stafursky was able to escape moments later to trim his deficit to 2-1.

With 1:10 remaining in the third period, Stafursky registered a reversal to take a 3-2 lead, then locked in a cradle for the fall at 5:16 to give Athens an insurmountable, 34-16, lead with three weight classes remaining.

“(Zach) finished that match nicely. He got it done when he had to,” said Bradley. “Now, if we can get him going in the first two periods, he’ll be tough.”

At 189 pounds, Wyalusing’s Alex Hunsinger turned in a workmanlike performance in a 10-4 win over Colin Rosh to cut the Athens lead to 34-19.

Hunsinger scored takedowns in each of the first two periods, and led 5-2 entering the final two minutes.

In the third period, he scored two more takedowns to secure the decision.

After an Athens forfeit at 215 pounds cut the Wildcat advantage to 34-25, freshman Josh Nittinger put the finishing touches on the win for Athens with a pin of Dereck Baldwin in 33 seconds to provide the final margin.

After the match, Bradley succinctly summed up the feelings of most coaches and wrestlers.

“I’m just glad we’re getting the chance to wrestle.”

Athens, now 5-3, returns to action Thursday when it hosts Sayre and NEB, while the Rams, now -1-1, travel to Towanda Friday.