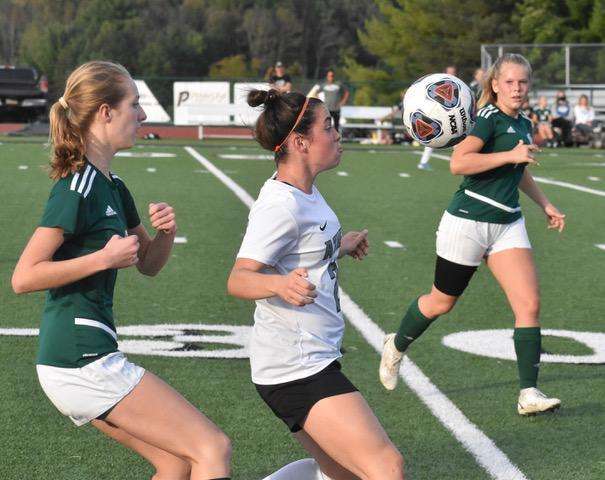 WELLSBORO — Senior Hannah Walker scored one goal, and assisted on the other to lead Athens to a 2-0 win over Wellsboro here Monday afternoon in NTL girls soccer action.

With the win, Athens improves to 4-0 in league play, and leads the NTL by 1 game over Wyalusing.

Overall, the Lady Wildcats are 5-4, with losses to Vestal, Fayetteville-Manlius, and New Hartford, as well as a 6-1 loss at Shikellamy Saturday.

“I thought we had good possession, and our build-up was pretty good,” he said. “And, I thought our speed of play was better because of the tough games we’ve been playing.

“We came out today after a tough game Saturday, but the speed of play for us was on, and I thought that showed through for the whole match,” added Pitts.

Athens took the lead in the 8th minute when Walker drove toward the end line, and sent a pass into the box, where junior Alli Thoman one-touched it past the Wellsboro keeper.

“We talked about wanting to test (Wellsboro) down the flank a little bit,” said Pitts. “And, we switched our formation from what we played them last time. We played a 4-4-2 last time, and today went back to a 4-5-1.

“We got into space, and Hannah (Walker) was able to beat the girl around the corner,” added Pitts. “She picked her head up and Alli (Thoman) made a great driving run to it, got her foot on it, and knocked it in. It was a great goal.”

With 6:11 remaining in the first half, Walker drove home a free kick from just outside the 18 to make it 2-0.

“That’s Walker’s third free kick goal,” said Pitts. “I would have liked it a little farther to the far post, but it was a good stiff hit. It was a nice goal.”

“Last time we played them, we had a lot of good chances, but we weren’t clinical enough in front of the net and put balls on the frame,” said Pitts. “We talked about it on the bus ride here, that we had to test (Abadi) … I thought she stood on her head tonight.

“They play good defense in front of her,” added Pitts. “They’re very courageous and throw their bodies in front of ball so things don’t get to her, but when things get to her, she’s good. She had a great game tonight."