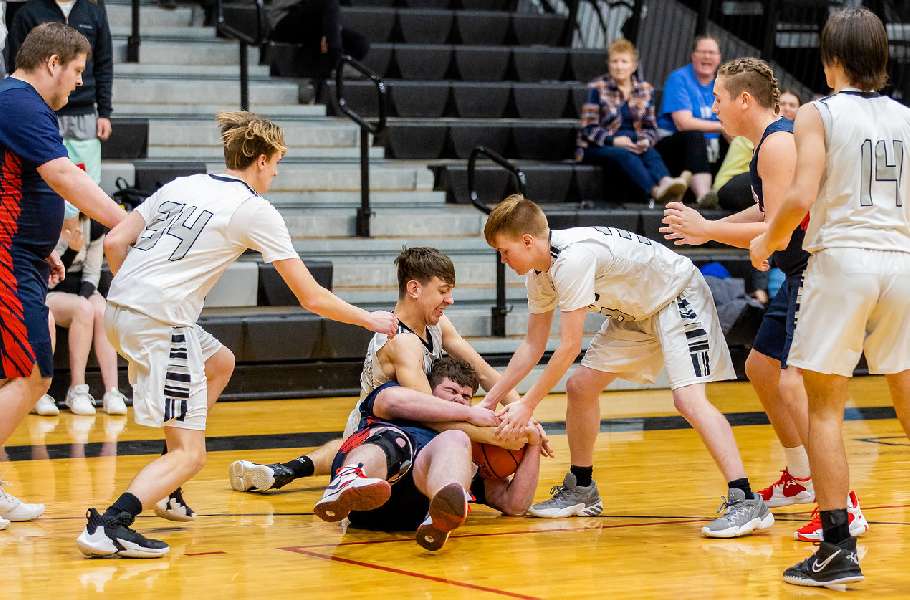 ATHENS - Athens scored 15 points in a row in a run that bridged the halftime intermission to blow open a close game on its way to a 67-28 win over Sayre here Thursday night in NTL boys basketball action.

The Wildcats led 19-16 with 2 minutes remaining in the second quarter, but closed out the first half with a 6-0 spurt to take a 25-16 lead at the half.

Athens opened the second with a 9-0 run to extend its lead to 34-16, and ended up outscoring the Redskins 42-12 in the second half.

"I think (Sayre's) game plan was to slow everything down," said Athens coach Jim Lister. "They wanted to slow the game down, and I think they did that in the first half, and that was good coaching on Coach (Devin) Shaw's part.

"We made some halftime adjustments, and came out in half-court press, and made them push the ball. We need to pick up the pace of the game," added Lister. "We forced a bunch of turnovers, got a bunch of lay-ups, and ran way with it."

"Credit to Athens, they are a good basketball team and they play well together," said Sayre coach Devin Shaw.

"We did a good job in the first half against their 3-2 zone," he noted. "We took care of the ball and got some good shots. Defensively in first half, we slowed them down a little and they didn't get the easy buckets that they did in the second half.

"In the second half, we came out flat and turned the ball over which lead to easy points and kind of put our heads down," added Shaw. "We need to be stronger with the ball and stay positive. I need to do a better job coaching that in practice."

Both team spread the ball around in the first quarter, and Athens led 13-10 after the first eight minutes.

Senior J.J. Babcock scored a pair of buckets in the opening 90 seconds of the second quarter to give the Wildcats a 17-10 lead, but junior Jackson Hubbard's old-fashioned three-point play trimmed the deficit to 17-13.

After a bucket by Lister, Sayre senior Josh Arnold canned a 3-pointer with 2:15 remaining in the second quarter to pull the Redskins with three points, at 19-16. Sayre wouldn't score again for more than four minutes.

Seniors Troy Pritchard, and Nalen Carling and Babcock closed out the second quarter with buckets to give the Wildcats a 25-16 lead at the half.

Senior Tucker Brown buried a 3-pointer on Athens' first possession of the second half, Brown and Carling turned Sayre miscues into lay-up in the next 35 seconds to extend the Athens lead to 32-16.

Babcock capped the 15-0 run with a steal and uncontested lay-up to make it 34-16 with 6:30 remaining in the third quarter.

Senior Cayden Firestine ended Sayre drought with a pair of free throws, but Athens scored the next 11 points to take a 45-18 lead with 45 seconds remaining in the third quarter.

Junior Carson Smith knocked down a pair of 3-pointers, and senior Ryan Thompson added five points to fuel a 22-7 game-closing run for the Wildcats.

Smith scored six points in the win, while Pritchard had four points and five boards, and Thompson had five points and four rebounds.

Athens, now 4-1, returns to action Tuesday at Waverly in the opening round of the Valley Christmas Tournament, while Sayre (2-2) hosts Towanda in the other opening-round game.