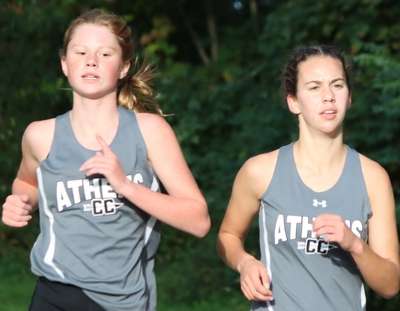 ATHENS — The Bronson sisters — junior Emma and freshman Sara — finished 1-2, and the Athens boys once again flashed their depth as both teams logged wins over Wellsboro and North Penn-Mansfield here Tuesday afternoon in NTL cross country action at Round Top Park.

BOYS
Athens 20, NP-Mansfield 41
Athens 17, Wellsboro 43
North Penn-Mansfield’s Noah Sheddon earned the victory, but Athens, still without its top runner — senior Kyle Anthony, had five of the next seven runners to cross the finish line to post bigs wins over Wellsboro and NP-M.

“The junior high boys had a really nice team race with five of the first six finishers,” he noted. “The varsity guys put in a solid, workmanlike effort.

“As they have all season, Matt (Gorsline) and Ethan (Denlinger) led the team up front and then our pack of guys filled in,” he added. “We got some good work in today and are looking forward to racing at the McQuaid Invitational this weekend.”

GIRLS
Athens 20, Wellsboro 35
Athens 26, NP-Mansfield 29
Emma Bronson and Sara Bronson finished 1-2 with identical times of 22:26 to lead the Lady Wildcats to a pair of wins.

“The junior high was led by Addison Bruns and Olivia Cheresnowsky, with Victoria (Gao) and Kayla (Marshall) we close behind to create a close pack.

For the varsity, Emma and Sara Bronson led the way,” noted Riley. “Thea Bentley had a big race today to help scoring.

“Cailyn (Conklin) and Emily (Hendershot) ran together to close out the top five, and put the team in a good position,” he added. “Ruby Kinsman ran a great first race of the season on a tough course.”

Athens returns to action Saturday at the prestigious McQuaid Invitational in Rochester.