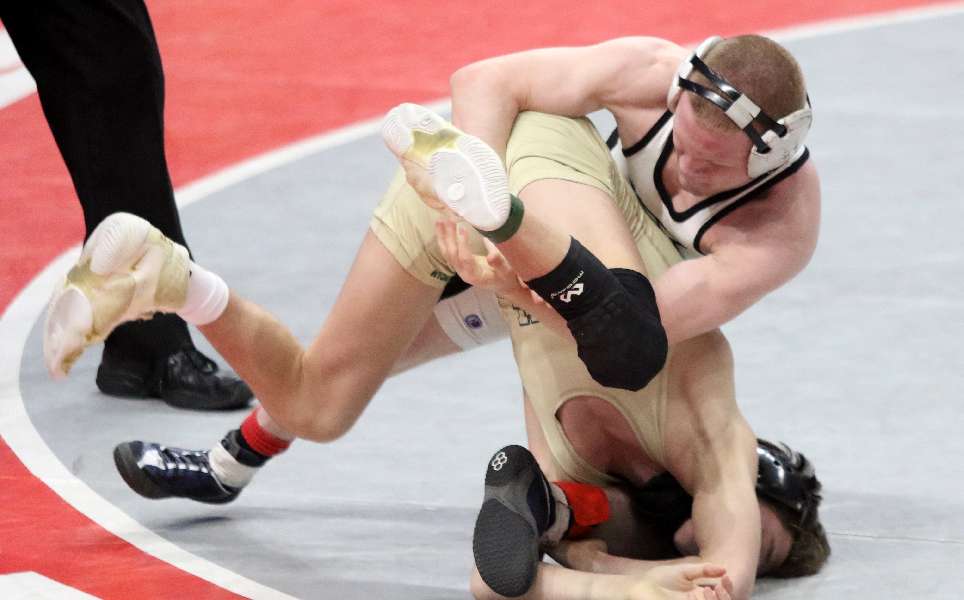 “Gavin had a great season,” said Athens coach Shawn Bradley. “He wrestled his butt off the entire season, and he works his tail off all the time.

“He deserved to win that much, he just didn’t do quite enough to win,” noted Bradley. “This one is going to hurt him for a little bit. He can use that as a driving force next year.”

Bradley pressured Pepe the entire first period, but it was Pepe who scored a takedown on a low double-leg with 15 seconds remaining to take a 2-0 lead into the second period.

Bradley pressed the issue for nearly the entire second period, but it was Bradley that was warned for stalling with 24 seconds remaining. The duo remained on their feet for the entire two minutes.

Bradley scored a quick escape at the outset of the third period to trim the deficit to 3-1.

After two stalemates, and four whistles for going out-of-bounds, Pepe was penalized for stalling with 17 seconds remaining to make it 3-2.

Bradley got in on a leg twice late in the match, but couldn’t finish either one off.

“(Gavin) has to have a little better mat sense,” said Shawn Bradley. “He had two shots on the edge … he just has to score there.”

Neither Bradley was pleased with the pace of the match.

“I’m not going to make excuses,” said Shawn Bradley. “(Pepe) won the match, he wrestled within the rules and won the match.

“Pulling our elbows, staying still, and doing nothing the whole match, though, it’s hard to somebody who’s not wrestling back,” he added.

“I pushed the pace the whole match,” said Gavin Bradley. “I tried my best to get to my stuff, but it didn’t turn out to be the match I wanted.

“He was always moving backward,” he added. “It’s hard to wrestle someone like that … I mean, we’re in the state finals, I think we should wrestle.”

Gavin Bradley, who finished sixth at States as a freshman and seventh last year, said he still has one more goal to accomplish, and will continue working hard.

“Knowing him, he’ll probably be at practice Monday, but I need a break,” laughed Shawn Bradley.

“I never take breaks,” said Gavin Bradley. “Sooner or later, I’m going to get what I want, and when I do, it will all be worth it.”