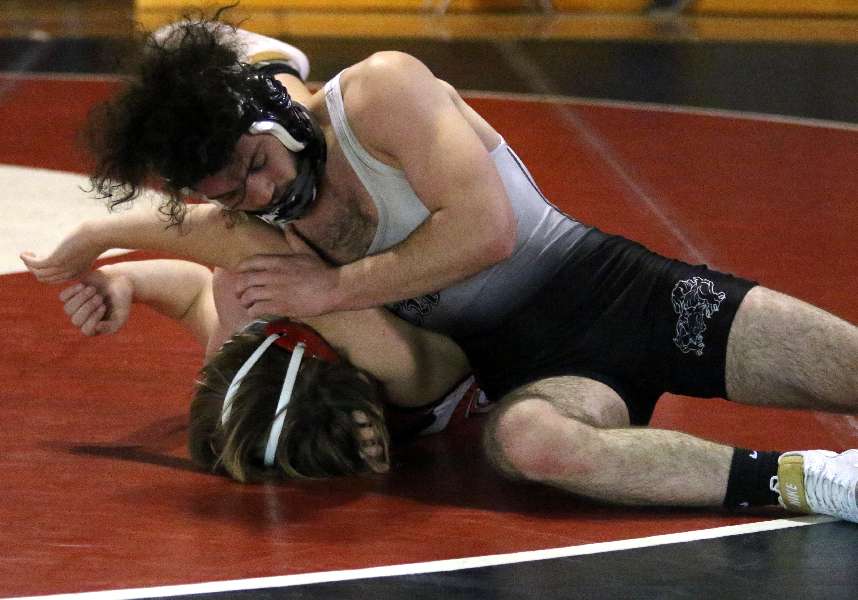 TROY — Athens wracked up bonus points in all eight of its victories, which included six falls, in a 50-13 win over Troy here Tuesday night in NTL wrestling action here at the Commons Building.

Unbeaten junior Gavin Bradley, now 28-0, got the Wildcats off to a fast start with a 30-second fall over Kenyon Slater at 113 pounds.

At 120 pounds, freshman Mason Vanderpool built an 8-2 lead early in the second period, then put Joseph Schwenk on his back for a fall at 2:45 to give Athens a 12-0 lead.

Seth Seymour put the Trojans on the board with an 8-0 major decision over sophomore Josh Courtney at 126 pounds.

Seymour scored a takedown midway through the first period, and an escape early in the second period to take a 3-0 lead into the third period.

Seymour scored another takedown early in the third period, and turned Courtney to his back late to secure the major decision.

Freshman Emiliano Mallare got the Wildcats back on the winning track with a 13-4 major decision win over ben Randall at 132 pounds.

Mallare scored a takedown midway through the second period to break a 2-2 tie, then turned Randall to his back to increase his lead to 7-2 entering the final two minutes.

A takedown and two near-fall points upped Mallare’s lead to 11-2 midway through the third period.

Randall scored an escape, and Mallare was penalized for locked hands to trim the deficit to 11-4, but Mallare scored another takedown at the buzzer for the 13-4 major decision.

At 138 pounds, Kaden Setzer scored a pair of quick takedowns, then turned Peyton Bellows to his back for a fall at 36 seconds to give Athens a 22-4 lead.

Junior Lucas Forbes kept it rolling for the Wildcats with a 10-2 major decision over Lacey Hitman at 145 pounds.

Forbes scored five takedowns in the match as his win increased the lead to 26-4.

Sophomore Chris Bathgate registered four first-period takedown, and added three near-fall points in the final seconds to take a 13-4 lead into the second period of this 152-pound match-up with Eli Randall.

Bathgate scored another takedown early in the second period, and finished off the pin at 2:31 to give the Wildcats a 32-4 lead.

At 160 pounds, junior Karter Rude locked a cradle in one Jayden Renzo for a 46-second fall to extend the lead to 38-4.

Senior Zach Stafursky made it six wins in a row for the Wildcats with a fall over Mason Woodward in 3:01 to make it 44-4.

After a scoreless first period, Stafursky scored a takedown and quickly locked in a cradle for the fall.

Josh Isbell stopped the bleeding for the Trojans with a 10-3 win in their 189-pound bout.

Isbell scored a takedown midway through the first period, and added two sets of near-fall points for an 8-0 lead after the first two minutes.

Isabel led 10-2 deep into the third period, but was banged for stalling in the final seconds to take away the major decision.

Athens, which finishes off the dual season with a 17-10 record, returns to action Saturday when it hosts the North Section Tournament.