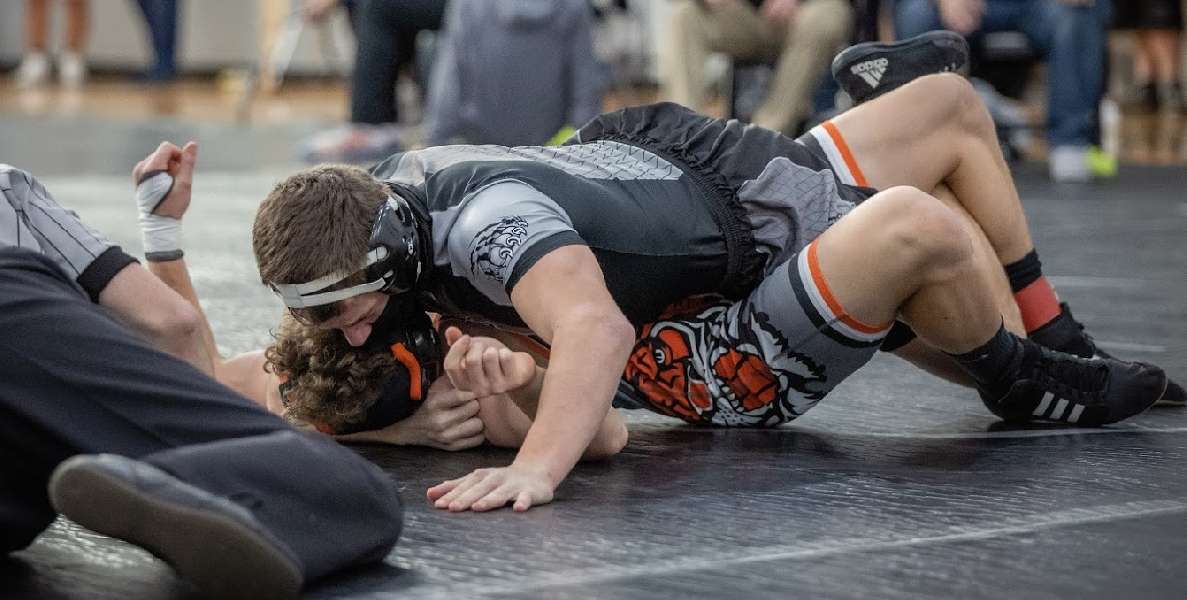 He recorded pins of 23 seconds over Mifflinburg’s Dylan Starr, and 4 seconds over Williamson’s Chelsea Hungerford.

Bradley finished his day with a 17-5 major decision of Benton’s Chase Burke.

Courtney forged a 14-0 major decision over Mifflinburg’s Dylan Starr in his first bout, lost via fall in 68 seconds to Burke in his next bout.

Courtney closed out the tournament with a pin of Hungerford in 28 seconds.

Setzer was dominant in his 138-pound title run, registering four falls — all in the first period.

Setzer then decked Williamson’s Aiden Passerallo in 9 seconds, and finished off his day with a pin of Sayre senior Bobby Benjamin in 1:54.

Rude pinned Williamson’s Cody Fleming in 1:54, then decked Benton’s Dereck Deitz in 28 seconds. He finished the day with a pin of Towanda’s Brandon Lantz in 77 seconds.

Bathgate went 3-0, including a pair of first-period falls to win the 152-pound title.

Stafursky was pinned by returning PIAA place-finisher Nolan Lear (5th at 160 pounds) of Benton in 3:40 for his only setback of the day.

He pinned teammate Josiah Stringham in 1:28, and then edged Benton’s Mason Michael, 7-5, for his two wins

At 120 pounds, Vanderpool was 2-2 to finish third, and sophomore Layla Bennett was 1-3.

Vanderpool pinned Williamson’s Mason Kelsey in 39 seconds, and Bennett in 1:50 for his two wins. He lost via fall to Benton’s Dylan Granahan and Mifflinburg’s Brady Struble, who finished 1-2 in the weight class.

Bennett’s win came via fall over Kelsey in 2:58.

McGrath went 1-2 to finish third in the 132-pound weight class. His lone win was a 34-second fall over Mifflinburg’s Jeremy Page.

At 145 pounds, Forbes went 2-2 to finish third in the weight class.

Forbes pinned teammate Jadon Rice in 3:20, and Towanda’s Garrett Chapman in 4:41 for his two wins.

He lost via second-period fall to Mifflinburg’s Troy Bingaman, and first-period fall to Benton’s Mason Smith. Bingaman was 4-0, including a technical fall win over Smith, to win the weight class.

Romberger finished 3-1 on the day to finish third in the 189-pound weight class.

His lone loss was via first-period pinfall to Benton’s Jake Bobersky, who won the weight class.

At 285 pounds, freshman Josh Nittinger was 1-2 on the day, logging a first-period fall of Towanda’s Jared Gunther for his only win.

Other champs on the day were Towanda’s J.B. Parker at 106 pounds, Mifflinburg’s Gabe Gramly at 126, Williamson’s Mike Sipps at 215, and Mifflinburg’s Emmanuel Ulrich at 285.

Athens returns to action Tuesday at Troy, while Sayre travels to Canton Tuesday.