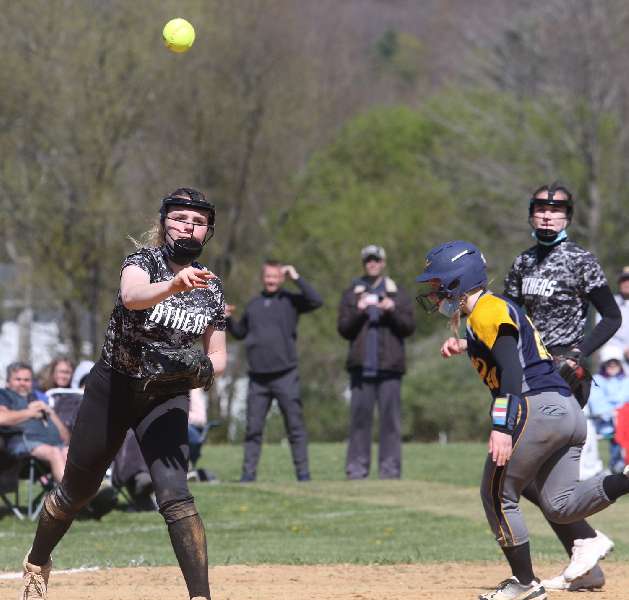 WAVERLY — Athens took advantage of fourth-inning opportunities to rally past Tioga, 10-5, here Saturday and finish the "Battle at the Border" with a 2-0 record.

Trailing, 3-2, the Wildcats parlayed back-to-back singles, two hit batters, a walk, an error and a trio of run-scoring fielder's choices into a half dozen runs to take control of the game in the top of the fourth inning.

"We've been doing that," Athens coach Mickey Farrell said of the come-from-behind victory. "We've fallen behind, but we have a lot of bats, and we score a lot of runs. The key is putting the ball in play and that's what we do best."

"We had an inning with some mental errors," Tioga coach Heather Klossner said. "I've got a lot of girls in new positions, so first time out in new positions, just some different positioning type things, and unearned runs. Errors kill you."

MacKenzie Morgan started the rally off with a single out of the 9-slot and lead-off hitter Audry Hatch followed with a base hit. After Harley Sullivan was hit by a pitch, Caydence Macik worked a walk to tie the game at three. Aliyah Butler and Addy Repsher hit into fielder's choices, each scoring a run.

With one away, Ashlyn VanFleet took one for the team to give Athens a 6-3 lead. A fielder's choice off the batt of Mallory Mummert and and an error on Morgan's second at-bat of the inning pushed the advantage to 8-3.

The Tigers kept plugging away, however, and picked up a pair of runs back in their half of the fourth. Abby Foley legged out an infield single, Olivia Ayres moved her over with a ground ball to third and Austyn Vance brought her home with a single up the middle.

Vance moved to second on the throw home trying to get Foley and Kindra Wessels smacked a double over the left fielder's head to plate Vance and close the gap to 8-5.

The Wildcats added a pair of insurance runs in the top of the seventh on a Macik hone run. Sullivan hit the left field line, narrowly avoiding a potential shoestring catch by the outfielder, then kicked the ball out of a Tioga player's glove as she slid into second. Macik followed by hitting an 0-1 pitch out of the park.

Sullivan put Athens on the board first, walking and scoring on Aliyah Butler's single up the middle. With runners at first and second, Wessels got out of trouble by striking out the next batter.

Tioga struck quickly in its half of the inning as Ayres led off with a walk and Vance doubled to left center to tie the score. A Wessels bloop hit over the shortstop gave Tioga a 2-1 lead. She bolted toward second on the throw in from the outfield and was safe on a play at second while Vance raced home to give the Tigers a 2-1 edge.

Repsher walked MJ Thetga, Molly Bombard and Julia Bellis in succession with the base on balls to Bellis scoring Wessels for a 3-1 lead.

The Wildcats pulled within a run in the second when Mallory Mummert capitalized on two errors and two stolen bases to trim the lead to 3-2.

Macik, who contributed the homer and two runs to the offensive effort, played a key role in the circle and recorded seven strikeouts, fanning four Tigers in a row to end the game. Tioga managed to put just one runner in scoring position during that stint.

"We've done that all year long," Farrell said. "Caydence is our closer. This I think is her fourth save this year. She comes in and she nails it down for us. She's done a really good job of that.

Repsher picked up the win, overcoming seven hits and five walks in the process.

Wessels went the distance for Tioga, scattering 11 hits while striking out five.

The Tiger hurler also contributed a pair of hits, as did Ayers and Vance. Thetga and Abby Foley had Tioga's other hits.

"MacKenzie Morgan, that was her first actual start at hitting," he said. "I usually let her just play the field and I believe she had two hits. The one started off a rally where we scored all those runs, so it was good to see her do that.

"Like I told the girls, it was a total team victory. This whole weekend, beating Towanda Friday night, then beating Waverly and this game. I said our total team won all three of these games."

The Tigers fell to rival Waverly earlier in the day, 7-5, while Athens downed the Wolverines, 14-3.