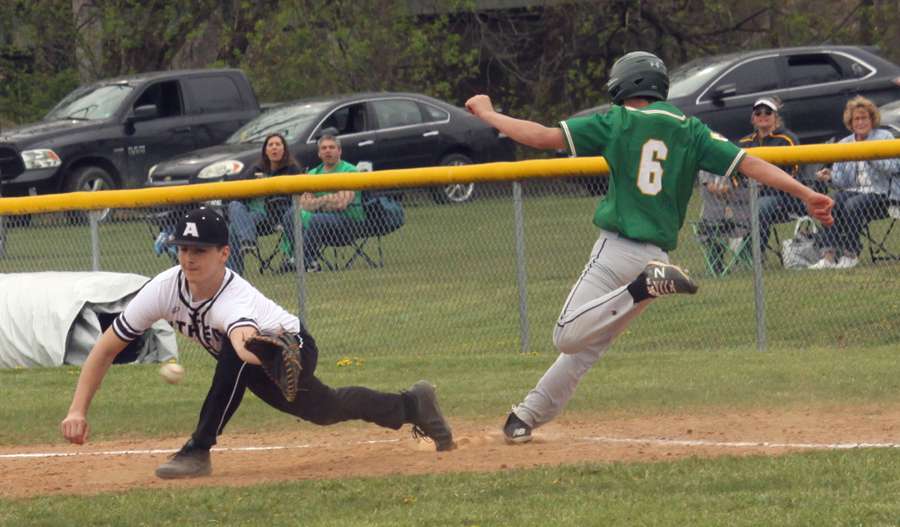 WYALUSING — Wyalusing took the lead in the bottom of the first inning, and never relinquished it en route to a 6-2 win over Athens here Saturday afternoon in NTL Large School Division baseball action.

With seven of his teammates, including four starters and the team’s ace pitcher, out due to Covid-19 quarantine, Wyalusing’s Nick Kelly stepped up with a strong pitching performance, and several of the remaining Ram hitter delivered key two-out hits.

Kelly earned the win, allowing two runs — one earned — on five hits, while striking out five and walking four in 6 2/3 innings of work. Trehnon Hugo worked around a walk to record the final out.

Athens took the early lead on an RBI single by Cam Sullivan in the top of the first inning, but the Rams answered with two runs in the home half of the inning.

With two outs, an Athens error extended the inning. After a single by Spencer Krewson and a walk loaded the bases, C.J. Carr delivered a two-run single to left field to put the Rams up 2-1.

Wyalusing added three runs in the second inning to take a 5-1 lead. All three runs came with two outs, and the rally included RBI singles by Chase Houser and Krewson.

Wyalusing tacked on a run in the third inning on a two-out error by Wildcats to extend the lead to 6-1.

Athens got a run back in the top of the fourth inning on an RBI double by Lucas Kraft, but he was left stranded at third base, and the Wildcats managed just a pair of singles over the final three innings.

Kraft was tagged with the tough-luck loss. He allowed six runs — all unearned — on 10 hits, while striking out two and walking two in five innings of work. Gage Warner allowed one hit and one walk in a scoreless inning of relief.