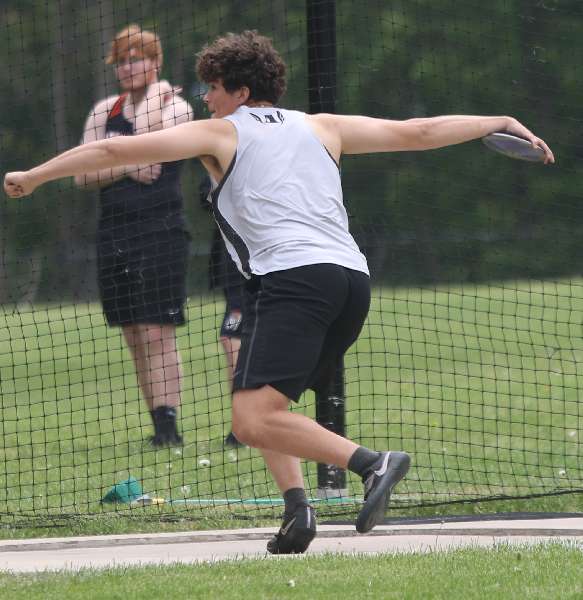 Ellis, who won district gold in the javelin Thursday night, added a second gold medal Saturday in the discus, and nearly qualified for States in a third throwing event before settling for a bronze medal at the District 4, Class AA Track & Field Championships.

On Thursday, Ellis struggled in the preliminaries of the javelin, and narrowly advanced to the finals, where he popped out a big throw to win gold.

On Saturday, Ellis’ best discus throw in the preliminaries was 114-feet, which put him in the ninth and final qualifying spot.

On his first throw in the finals, Ellis unleashed a throw of 149-feet, 10-inches, which ended up besting runner-up Cole Goodwin of Milton (139-feet, 11-inches) by nearly 10 feet.

“The nerves were kicking in. It’s tough with all these talented throwers — anybody could have won,” said Ellis.

“It started out the same as the javelin, I was struggling, then it clicked.

“I got settled in after the first three throws,” added Ellis. “I knew I had it in me, I just had to do it.”

Ellis said the wind was also a factor.

“(The) wind was tough,” he said. “If you didn’t have a perfect release, the wind would catch it, and flip it right back. You had to be mindful of that.”

In between the preliminaries and the finals, each competitor received one practice throw. Ellis’ practice throw may have been his best of the day.

“That throw gave me a little boost of confidence, and let me settle in,” he said. “Then, I let if fly.”

Later in the afternoon, Ellis and Central Columbia Garrett Carter tied for second in the shot put with throws of 46-feet, 11-inches. Carter claimed the silver by virtue of having a better second-best throw of 45-feet, 6 3/4-inches, compared to Ellis mark of 42-feet.

“I did what I could do,” said Ellis. “It’s been a long day … not to make excuses, but I just didn’t perform as well as I could have. And, that’s all right.”

Ellis will now prepare to compete in the javelin and discus in the PIAA Championships.

“As much as I wanted to win all three, what you want doesn’t always happen.

“I did what I could,” said Ellis. “It will definitely allow me to focus more on the javelin and the discus.

“I’m proud of myself, and I’m good with my performance,” added Ellis.

The Wildcats finished fifth in the highly-bunched team standings. Tightly-bunched aside from Southern Columbia that is.

The Tigers ran away with the team title with 113.5 points, while Mount Carmel was second with 55 points, Milton was third with 49.5 points, Loyalsock was fourth with 48 points, and Athens and South Williamsport were tied with 46 points. Sayre was 22nd in the 25-team field with 4 points.

“Asher (Ellis) led the way today and Thursday with some big points in the throwing events, but we added points along the way in the relays, and some of the other events,” said Athens coach Scott Riley.

“When you have one team that runs away with it, it kind of lets the rest of us battle it out for what’s left.

“The kids were PRing left and right,” noted Riley. “It’s been tough with the heat, but they adapting the best they can, and do pretty well.

“It’s been an incredibly coachable group across the board, and a very exciting team,” added Riley. “It’s been fun to watch them grow throughout the season.”

The Athens foursome of senior Joe Toscano, junior Levi Kuhns, Thompson, and sophomore Jaden Wright finished eighth in the 400-meter relay in a time of 46.92 seconds.

Lasusa finished ninth in the 400-meter hurdles in 53.1 seconds, and Sayre senior Tavone McClenny was 16th in 54.84 seconds.