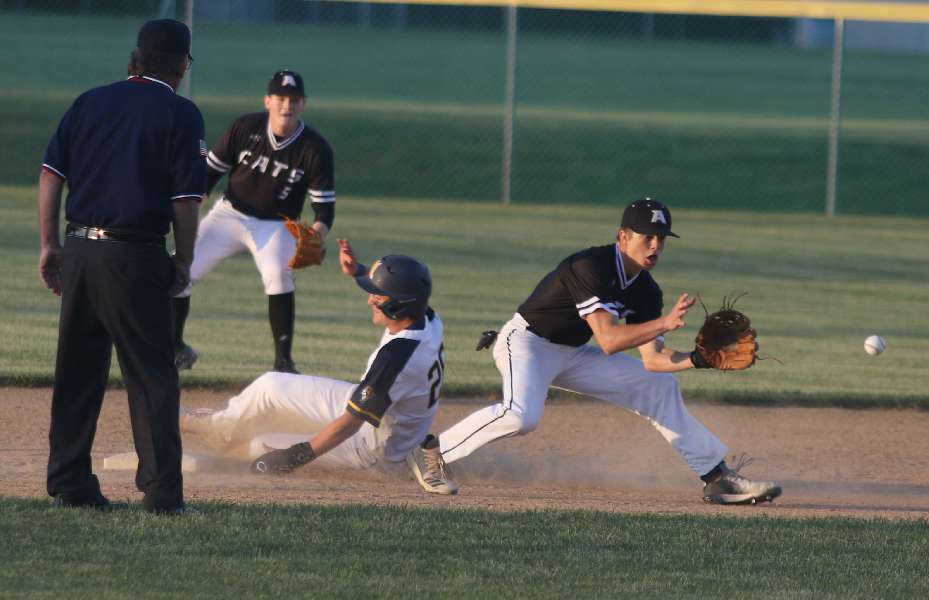 Second-seed Montoursville scored six runs in the bottom of the fourth inning to break open a tie game on its way to a 9-2 win over third-seed Athens here Thursday in the semifinals of the District 4, Class AAAA baseball playoffs at Central Columbia High School.

“One bad inning … we made a couple bad plays that extended the inning; that was the difference,” said Athens coach Charlie Havens. “(Montoursville) took advantage of our mistakes, and put together a big inning.”

With one out in the home half of the fourth, Dylan Moll ripped a single through the hole at short.

Three pitches later, Moll took of for second, and Athens shortstop Karter Rude broke toward the bag to take a throw, but Antonio Lorente executed a perfect hit-and-run with a groundball single into left field

With runners on first and third, C.J. Signor laid down a perfect squeeze bunt between the pitcher and first baseman to score Moll with the go-ahead run.

“(Montoursville) answered right back after we tied the game,” said Havens. “That’s what good teams do.

“They executed very well to get their first run,” added Havens. “They’re a good team, it’s fun to watch that kind of stuff.”

Back-to-back walks forced home another run to give Montoursville a 3-1 lead, and Nick Reeder followed with an RBI double just inside the third-base page to make it 5-1.

Havens elected to lift starter Mason Lister for fellow sophomore Lucas Kraft, and Kraft struck out the first batter he faced. However, Nolan Kutney hammered a 1-1 pitch into the right-center field gap for a two-run double to push the lead to 7-1.

The Wildcats scored a run in the top of the sixth without the benefit of a hit, but Maddox Dalena answered with a two-run home run to left field in the home half of the frame to provide the final margin.

Montoursville scored an unearned run in the bottom of the second to take a 1-0 lead, but Athens answered with a run in the fourth to tie the game.

Rude led off the Athens fourth with an infield single, and advanced to third base on an errant pick-off throw. Sophomore Caleb Nichols drove him home with a sacrifice fly.

Reeder started for Montoursville and pitched six innings of one-hit ball to earn the win, striking out six and walking just one. Grayson Rinker retired Athens in order in the seventh, striking out two.

“We only had one hit, and that was an infield single, so we didn’t help ourselves out that way,” said Havens.

Lister was tagged with the loss, allowing seven runs — six earned — on four hits, while striking out three and walking three in 3 1/3 innings.

Kraft finished off the game, allowing two runs on two hits, while striking out five and walking one in 2 2/3 innings or work.

Athens wraps up the season, the first under Havens, at 12-9.

“Me going from being a JV coach for such a long time … it was a harder transition than I thought it would be,” noted Havens. “Getting use to the speed of the game … and I didn’t know any of the teams in the NTL — I do now.”

“The whole year was a learning experience. Figuring out our system took a little time, but once we did, we came around and did some good things,” he added. “Once we put it together, we won 8 of our last 10 to end the regular season.”

“We’re going to lose three real good seniors who came to work every day,” said Havens. “They will be tough to replace, and will definitely be missed.”

Havens believes the future is bright for Athens baseball.

“We have a lot of sophomores, who will be juniors, coming back; and Karter Rude will be a senior, he’s a heck of a player,” said Havens. “We have the pieces here.

“Nick Jacob is going up from the JVs. He’s going to be a heck of a ball player, and someone who will help us going forward,” noted Havens. “And, Connor Mosher does a lot of good things. He will help us out.

“Our junior high team was 15-2. There are some kids coming up from that team that we’ll take a look at.

“People are going to get pushed for spots,” added Havens. “I think we have a three or four year window where we can make a run at this.”