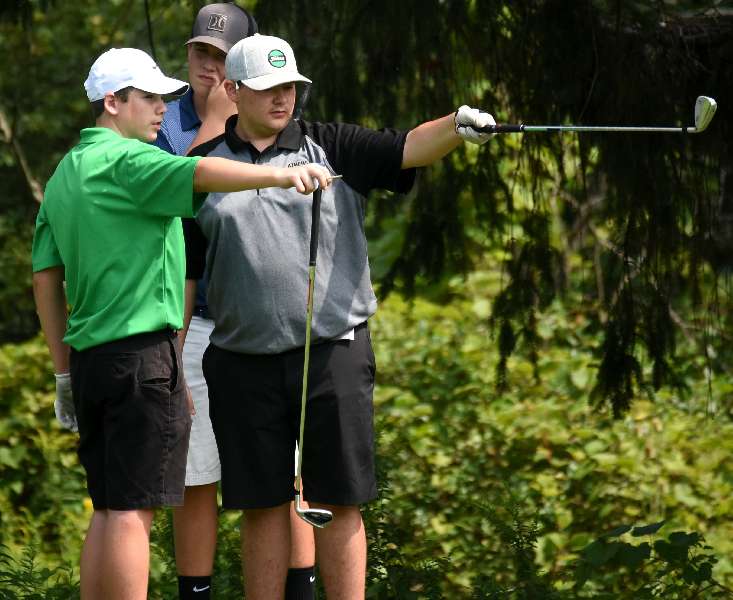 WAVERLY — Sayre, led by low medalist senior Kannon VanDuzer, and Athens finished 1-2 in the opening NTL golf match of the season here on a steamy Wednesday afternoon at The Club at Shepard Hills.

“I was proud of the way the kids played today,” said Sayre coach Jamie VanDuzer. “The heat was brutal, so I think a few got tired by the end.

“Our new guys played pretty good for their first time out,” he noted. “Most are nervous not knowing how the matches work, but I felt they settled in and did OK.

“I think other than Kannon (VanDuzer), the team wasn’t too pleased with their scores, and feel they will score better going forward.

“The league looks to be down score-wise, but the top 10 or 15 should be pretty competitive,“ added VanDuzer. “It will be fun.”

The Redskins shot a four-man aggregate score of 377, edging out the Wildcats by 1 stroke. Wellsboro was third in with a 382, while Wyalusing was fourth with a 399, Towanda was fifth at 440, Cowanesque was sixth at 444, and North Penn-Mansfield was seventh at 481.

NP-M junior Andrew Green was second for the day with an 83, while junior Cam Sullivan led Athens with an 88 to finish third.

Athens sophomore Evan Cooper finished fifth with a 92, and freshman Dylan Saxon was eighth with a 94, while junior Lucas Kraft was 17th with a 104, and freshman Sean Clare was 20th with a non-scoring round of 105.

Seniors Josh Arnold and Dom Fabbri added non-scoring rounds of 108 for the Redskins.

Freshman Keaton Sinsabaugh tacked on a non-scoring round of 137 for the Wildcats, and sophomore Nicholas Jacob shot a nine-hole score of 56.