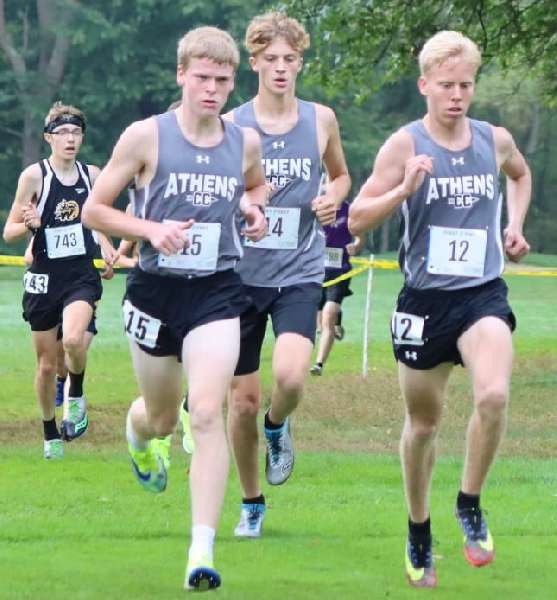 CHENANGO FORKS — Seniors Kyle Anthony and Matt Gorsline, and junior Ethan Denlinger all finished in the top 20 to lead Athens to a second-place finish in Race 1 here Saturday at the Pre-States McDaniel-Baxter Cross Country Invitational at the Chenango Valley State Park.

There were five boys races, and five girls races. In all, there were 83 boys teams, including 66 complete teams, competing, and 78 girls teams, with 47 complete teams. There 675 boys in the merged field, and 463 girls.

Powerhouse Fayetteville-Manlius had seven runners in the top eight and ran away with the team title in Race 1 with 19 points. Athens tallied 78 points, while third-place Nanuet had 123.
“As a team, the boys really ran a solid race today,” said Athens coach Mike Bronson. “To place second as a team in our race, against the level of competition that was here today, is a good showing for us.

“We got out a little more aggressively than we normally do, and then the boys responded well to the competition,” he noted.

“Carter Lewis and Ethan Hicks did a great job today, in their first high-level invitational. Kyle Anthony, Matt Gorsline, and Ethan Denlinger are really consistent for us up front, they work well together.

——————
PHOTOS 1-8 COURTESY OF AMANDA CONKLIN. ... PHOTOS 9-24 BY TIM TAYLOR.
MERGED RESULTS
ATHENS
The Wildcats finished 16th out of 66 complete teams with 580 points. (Corning won the team title with 84 points, and Fayetteville-Manlius was second with 147 points.)