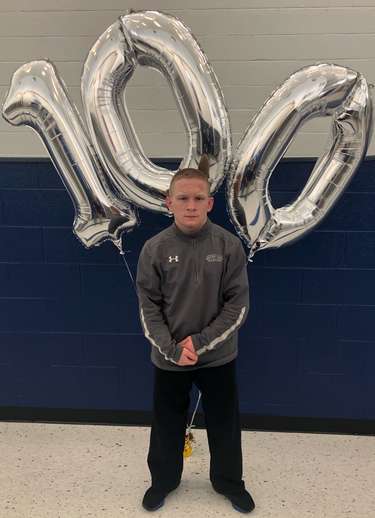 Senior Zach Stafursky and sophomore Chris Bathgate each went 4-1 for the Wildcats, while senior Kaden Setzer and Karter Rude were both 3-2. Sophomore Jake Courtney, and freshmen Josh Courtney and Mason Vanderpool each won two matches.

Benton 46, Athens 30
Benton won the final four weight classes, including on by fall and two via forfeit, to rally for a 46-30 win over Athens in the first match of the day.

West Perry 52, Athens 22
Once-beaten West Perry won five straight bouts late in the match to pull away for a 52-22 win over Athens.

At 113, Bradley closed out the match with a 16-8 major decision over previously-unbeaten Deven Jackson.

Junior Karter Rude put the Wildcats on the board with a pin of Chandon Maurer in 1:46 at 160 pounds, and Stafursky followed it up with a 4-3 win over Cale King at 172 pounds to cut the Athens deficit to 24-9.

Line Mountain won four of the next five weight classes, including two forfeits and a fall, to stretch its lead to to 45-13. Freshman Josh Nittinger picked up a forfeit at 285 pounds for Athens’ only win in that stretch.

Bradley, stepping up a weight class, closed out the match with a 12-3 major decision of Aidan Kritzer, who entered the day at 15-2.

Athens 45, Mifflinburg 24
Athens won six of the first seven weight classes to race out to a big lead en route to a 45-24 win over Mifflinburg.

Jake Courtney got the Wildcats off to a fast start with a pin of Jeremy Page in 1:26 at 132 pounds, then Kaden Setzer had his hand raised at 138 pounds — the first of four forfeits Athens would receive — to make it 12-0.

After Mifflinburg standout Troy Bingamann registered a fall at 145 pounds, Bathgate and Rude were awarded forfeits at 152 and 160 pounds, respectively, to make it 24-6.

Stafursky ended his 172-pound bout in 52 seconds with a fall over Jon Melendez, and junior Colin Rosh received a forfeit at 189 pounds to extend the lead to 36-6.

Bradley provided Athens’ final points of the bout with a 16-0 technical fall of Brady Struble at 120 pounds.

Jersey Shore 35, Athens 33
Athens only won one bout on the mat, but five forfeits kept them in the match until the final weight class in a 35-33 loss to Jersey Shore.

The Wildcats’ only win was at 172 pounds, where senior Zach Stafursky forged a 7-2 decision over Jon Smith.

In that final match, Jersey Shore’s Liam Goodrich pounded out a 16-1 technical fall win to secure the victory for the Bulldogs.