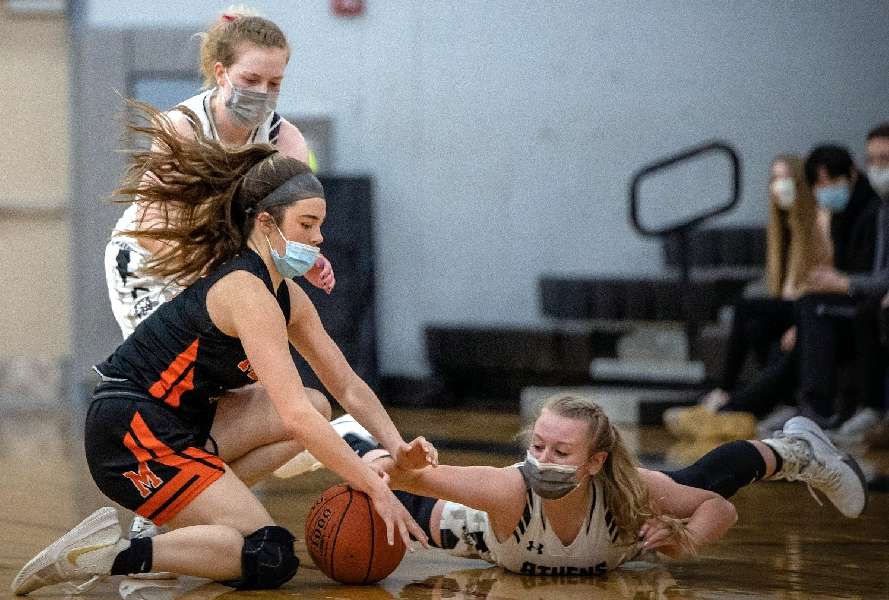 ATHENS — Athens built a 14-point lead early in the third quarter, but on three different occasions over the next 12 minutes needed a “big shot” to stave off a pesky Milton in a 54-42 win here Thursday night in the quarterfinals of the District 4, Class AAAA girls basketball playoffs.

“It was a night where we played really well to get the lead,” said Athens girls coach Brian Miller. “(Milton) is a good team and they battled back, then we responded with big 3s from Kayleigh (Miller) and Megan (Collins), and a nice pass (from Megan Collins to Caydence Macik) for a finish in transition.

“I’m super-proud of the girls, we knew that team was going to battle for 32 minutes, no matter what, and we did a good job,” he added.

“We’re that much better of a team, though, if the other girls make their shots, and they did tonight,” added Miller.

Senior Megan Collins added nine points on a trio of 3-pointers, and five assists for the Lady Wildcats, while sophomore Karlee Bartlow added five points — all from the free-throw line in the fourth quarter, and four rebounds, senior Rachel Stephens grabbed five boards, and senior Hannah Blackman chipped in with four rebounds.

Macik scored Athens’ first two buckets, then Miller gave the Lady Wildcats the lead for good, at 7-4, with a 3-pointer from the top-of-the-key with 5:02 remaining in the first quarter.

Macik added a putback of her own miss to make it 9-5 with 2:35 remaining. After a Milton bucket, Miller buried another 3-pointer from the right wing to make it 12-7 less than a minute later.

Back-to-back 3-pointers by Miller late in the quarter extended the Athens lead to 25-12, but Milton scored the only bucket in the final 85 seconds of the first half, and trailed 25-14 heading into the locker room.

Collins buried her second 3-pointer of the game a little more than a minute into the second half, to give Athens a 28-14 lead, but Milton’s physical pressure defense helped it scored eight points in a row to cut the deficit to 38-32 with 4:27 left in the third quarter.

“We wanted to come out in the second half and extend our lead, hopefully close to 20, and the game could be over,” said Miller.

“We got it to 14, then they made a nice push with some physical play in the backcourt,” added Miller. “We turned it over and they made some baskets, but we held our composure, and made some key shots down the stretch.”

Miller stopped Milton’s momentum with a 3-pointer from deep in the corner to make it 31-22 with 3:22 left in the third quarter.

After a bucket by Kiersten Stork trimmed the lead to 31-24, Macik made a pair of free throws, then scored in transition against the Lady Black Panther press to make it 35-24 with 1:12 remaining in the third quarter.

Freshman Emma Bronson connected on a short jumper just 10 seconds into the final stanza to give Athens a 37-26 lead, but a bucket by Stork, followed by a defensive rebound and coast-to-coast drive by Crystal Hamilton, and a jumper by Morgan Riener cut the lead to 37-32 with 6:27 left in the third quarter.

Collins stemmed the tide with a 3-pointer to make it 40-32, but Milton bounced back to cut the lead to 42-36 with 4:16 remaining in the third quarter.

The Milton pressure seemed to be wearing on the Lady Wildcats, but Collins found Macik open up court against the press for an uncontested lay-up to make it 44-36.

A pair of free throws by Miller and Bartlow would push the lead to 48-36 with 3:39 remaining.

Milton would close the gap to nine points twice in the final 3 1/2 minutes but could get no closer.

“I saw (Hamilton) on tape and knew the was good, but seeing her in person you can really appreciate that’s she is a really good ball player,” said Miller. “Unfortunately for her, and fortunately for the Lady Wildcats,  she fouled out, and didn’t get to play the last couple minutes.”

The third-seeded Lady Wildcats, now 17-6, will travel to second-seeded Shamokin (10-5) Monday at 7 p.m. for a Class AAAA semi-final match-up.