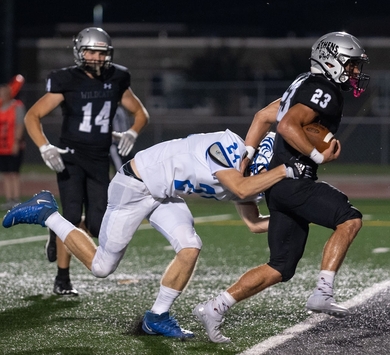 The Wildcats are coming off a 44-6 demolition of Hanover, while Troy also hosted a non-league foe — dropping a 20-0 decision to Bald Eagle Area.

“Troy lost a tough game to a solid football team (in Week 1),” said Athens coach Jack Young. “There’s no disguising what Troy, they are a good mix of physical kids.”

“Troy presents certain things to you, and you have to play the game a little differently against them,” he added.

The Trojan cornerstone is two-way lineman Mason Imbt, who stands in at 6-3, 300 pounds.

“Obviously, they are led up from by Imbt, who is a mountain of a kid,” said Young. “He plays really hard — he gives 100 percent on every snap. He’s fun to watch … you don’t see many kids like him.”

WHEN TROY HAS THE BALL
Troy rushed for 153 yards in Week 1, led by 75 yards on 19 carries by senior Damien Landon. The Trojans threw for 45 more, with QB Justice Chimics completing 6 of 10 passes attempts. He was intercepted twice.

Young said there is no mystery about what Troy brings to the table offensively.

WHEN ATHENS HAS THE BALL
The Wildcats ran for 278 yards, and added 101 more through the air. Senior Shayne Reid rushed for 144 yards and two TDs on 11 carries, and added a 26-yard TD reception, while junior QB Mason Lister completed 6 of 10 passes for 101 yards, and three TDs.

Young said the Trojans will rely on their big defensive line to free up their linebackers and defensive backfield to make plays.

“For the most part, Troy is a three-man front,” he said. “They put their big dudes up front to occupy space, and they let their athletes run to the football. They have some linebackers who play the game very well.

“We have to be prepared, and use the entire width of the field, and try to take our shots when we have them,” added Young.