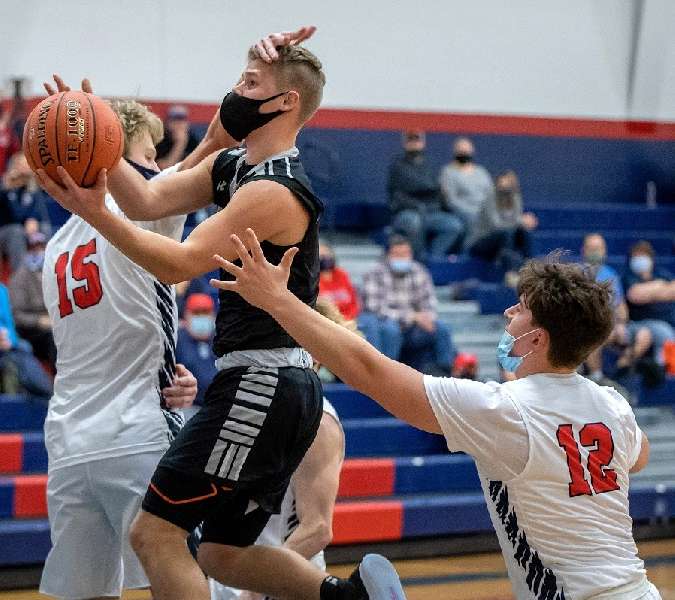 The Wildcats were successful getting out in transition and converted several breakaway lay-ups throughout the contest.

“We really talk about pushing the ball, and attacking every time we have the ball,” said Athens coach Jim Lister.  “We have the speed and we have the size. We need to take advantage of that and use it … we did that at times tonight.

Sayre coach Devin Shaw also pointed to Athens’ fast-break success as the difference in the contest.

“I think our biggest problem was, we got beat on the fast break a lot tonight,” he said. “(Athens) got a lot of leak-out points, and I think that was the big difference.

“They built a lead, and it’s hard to come back, especially against a good team that can do that,” added Shaw.

Lister also pointed to his team’s performance on the defensive end of the floor, especially his big men getting out on Sayre’s shooters.

“I thought we had a good defensive night tonight,” he said. “Holding a team to 40 points is going to win you a lot of ball games.

“You have to look at the match-ups. Sayre likes to shoot the ball from the outside,” added Lister. “We had to take that away, and I thought we did a pretty good job of that tonight.”

Sayre’s Lucas Horton buried a 3-pointer to give Sayre a 3-2 lead about 90 seconds into the game, and the teams traded buckets for the next 2 1/2 minutes.

Sayre senior Connor Young’s short jumper in the lane gave Sayre a 7-6 lead with 4:02 remaining in the first quarter. It was the Redskins’ last lead of the game.

Moments later, junior Mason Lister scored on a driving lay-up to give the Wildcats an 8-7, and sparking an 8-0 spurt.

Junior J.J. Babcock made it 10-7 with a putback on the offensive boards, then scored back-to-back uncontested lay-ups in transition to push the lead to 14-7 with 2:20 left in the first quarter.

“I thought we did a good job of attacking the rim in the first quarter, and played some really good basketball,” said Lister. “Then, we got a little complacent in the second quarter.”

After the teams traded buckets to end the first quarter at 18-11, Sayre junior Dom Fabbri drained a 3-pointer to start the second quarter and trim the deficit to 18-14.

Babcock then blocked a shot on the defensive end, and then finished off the fast break on the other end. Moments later, junior Nalen Carling scored in transition to make it 22-14.

Sophomore Jackson Hubbard scored on the offensive boards for the Redskins to spark a 7-0 spurt that was capped by senior Connor Young’s putback to trim the Athens lead to 22-21 with 2:31 remaining int he first half.

After a defensive stop, the Redskins had a chance to take the lead, but missed an open jumper. Athens junior Troy Pritchard rebounded the miss, and found junior Tucker Brown open downcourt with a baseball pass for an easy lay-up to make it 24-21.

Junior Shane Reid scored with 1.2 seconds remaining to give Athens a 28-23 halftime advantage.

Shaw took note of the play of Hubbard and Young.

“You need guys to be able to come of the bench and play a role, do their job when their number is called,” said Shaw. “(Jackson Hubbard) gave us a spark, and helped keep us in the ball game.

“And, Connor (Young) did a great job in the post,” added Shaw. “He’s getting better every day.”

The Redskins held Athens scoreless for nearly four minutes to start the second half, and again trimmed the deficit to one point, at 28-27, but Reid’s runner in the lane with 4:07 sparked a 6-0 spurt that ignited the decisive run.

Young scored from point-blank range with 1 second remaining in the third quarter, but Pritchard and Lister scored buckets in the first minute of the fourth quarter to give the Wildcats a 38-29 lead.

After Sayre senior Matt Lane knocked down a 3-pointer, the Wildcats used an 8-2 spurt that featured a pair of old-fashioned three-point plays by Brown to stretch their lead to 46-34 with 4:12 left in the game.

The Redskins had one final run in them as Fabbri made four consecutive free throws, and Lane added two to trim the Athens lead to 46-40 with 2:37 left in the game.

On Athens’ ensuing possession, Babcock popped open in the paint on an in-bounds play under the bucket for an easy score with 1:57 left in the game to make it 48-40.

After Sayre made 1 of 2 free throws 12 seconds later, Athens put the game away, scoring the final six points of the game.

Lister was pleased with the win, but notes there’s is room for improvement.

“Was it a perfect game? No, we still have to work on getting better,” added Lister. “This league is way too good, you just can’t take a night off.”

Brown had eight points and two steals in the win, while Lister had four points, four rebounds, and five assists, and Reid chipped in with four points and five boards.

Fabbri led Sayre with 12 points, while Young posted a double-double with 10 points and 10 rebounds, Hubbard added nine points and five rebounds, and Lane chipped in with five points.

Athens improves to 4-2, and has won three straight, while Sayre falls to 1-3, and has lost three in a row.

Shaw remains positive despite the losses.

“They were all winnable basketball games,” he said. “Obviously, Athens is a good team, but we’re still competing.”