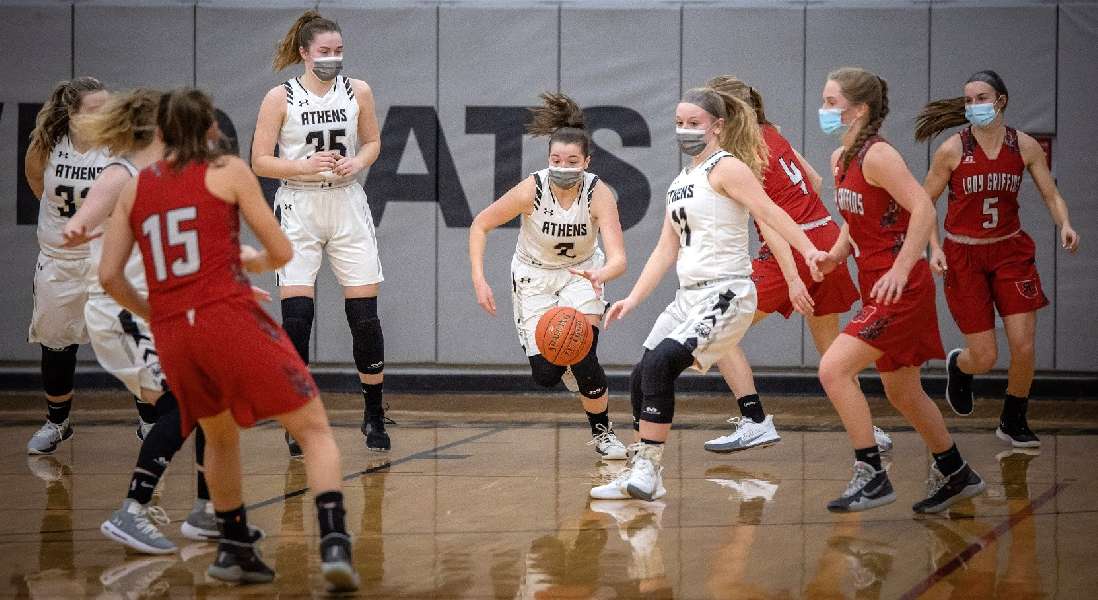 ATHENS — Athens let a 14-point third-quarter slip away, and twice needed points in the final seconds to force extra play on its way to a double-overtime, 60-58, win over Sullivan County here Monday night in non-league girls basketball action.

“Then, we made plays early in the second overtime to get the lead, and we were able to hold on to the lead,” he noted.

“It showed some guts and determination,” added Miller. “It’s good to play a game like that … to have to execute down the stretch to win those close games.”

The Wildcats also beat Northeast Bradford in double-overtime to open the season.

Athens built a 14-point lead midway through the third quarter, but foul trouble took its toll.

“We turned the ball over a lot in the full-court, and in the half,” said Miller. “They were pressuring our guards all over the place, so we couldn’t enter the ball into the post, or run our offense, and we had some silly turnovers.

“The most disappointing part was we built the lead to 14 points in the third quarter, then we had a couple girls get in foul trouble,” he noted. “We made some really silly mistakes, and the next thing you know it’s a ball game in the fourth quarter.

“We had some really uncharacteristic turnovers in the half-court set, and in the full-court,” added Miller.

Sullivan County closed the third quarter with a 9-0 run to trim the deficit to 40-33 entering the final eight minutes.

The Lady Griffins eventually took the lead, and were up two in the closing seconds when junior Caydence Macik — who scored 18 of Athens’ 21 second-half points, including all eight in the fourth quarter, rebounded an Athens missed and scored on the putback with 2 seconds remaining to tie the game at 48-48 and send the game into overtime.

Sullivan County took the lead early in the extra session with four straight points, but Athens tied the game on a pair of free throws by senior Kayleigh Miller with 15 seconds remaining.

The Lady Wildcat defense then held Sullivan County without a shot in the closing seconds.

In the second overtime period, Macik drained a pair of free throws to give Athens a 58-56, then added a bucket with 40 seconds remaining to up the lead to 60-56.

“This is a good win for us,” said Miller. “The girls played hard, and overcame some adversity. This will help us in the long run.”

Miller, who was limited to just four free throws after the intermission in part due to foul trouble, knocked down a 3-pointer and scored seven points in the opening stanza to help the Lady Wildcats to a 9-7 lead.

Macik scored eight points in the second quarter, while Miller added five, including her second 3-pointer, and senior Megan Collins buried a trey in the Lady ‘Cats’ 18-13 run that pushed the lead to 27-20 at the break.

Macik scored 10 points, and Collins was 3-for-3 from the line after being fouled on a shot from behind the arc as Athens stretched its lead to 40-26 with 2 1/2 remaining in the third quarter.

Macik, who made 15 of 22 shots from the field, led Athens with a career-high 34 points, to go along with 11 rebounds, four assists,  two steals, and one blocked shot, while Miller had 16 points, eight rebounds, and five assists,