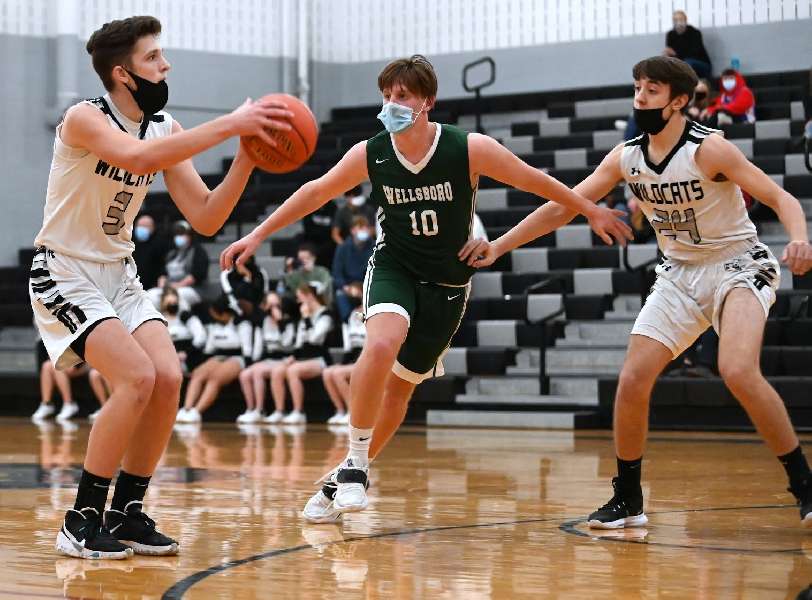 ATHENS — Athens wiped out a 16-point fourth-quarter deficit in less than three minutes, then needed a pair of 3-pointers by sophomore Mason Lister in the final 47 seconds to pull off a stunning, 54-53, come-from-behind win over Wellsboro here Friday night in NTL boys basketball action.

Through the first three-plus quarters, the Wildcats shot less than 30 percent from the field, and were out-rebounded by a smaller Wellsboro team, but junior Tucker Brown’s 3-pointer triggered a 17-1 blitz that pulled Athens even with just over 2 minutes to play.

“I’ve been waiting for these kids to get going for three games,” said Athens coach Jim Lister. “I know what they can do, I’ve seen it for years. They just needed to turn it up a notch, and to get excited.

“All of a sudden, I think Tucker Brown’s 3 sparked them,” he noted. “They started playing defense, they started attacking … it was a whole different team in the last five minutes.

“I’m proud of them, they didn’t quit,” added Lister. “We did a lot of things wrong tonight, but hopefully we can use this as a stepping stone to get going, and win some basketball games.”

Wellsboro jumped out to an early 8-2 lead, but Lister and junior J.J. Babcock scored fast-break buckets, and senior Griffin Stein canned a 3-pointer with 2 seconds remaining in the first quarter to give the Wildcats a 9-8 advantage.

Athens took a 13-12 lead on a pair of free throws with 4:36 remaining in the first half, but Wellsboro scored five straight points to take a 17-13 lead.

The team exchanged buckets, with Wellsboro’s Isaac Keane scoring with 5 seconds remaining to give the Green Hornets a 21-17 lead at the half.

Peyton McClure buried a 3-pointer on Wellsboro’s first possession of the second half, and Darryn Callahan added a bucket with 7:03 remaining in the third quarter to up the Hornets’ advantage to 26-17.

Lister scored a bucket in transition with 5:48 remaining, and Babcock followed with two fast-break buckets in the next 59 seconds to cut the deficit to 26-23. It could have been closer, but the Wildcats went 0-for-5 from the free-throw line in that stretch.

Athens cut the deficit to 31-27 with 2:49 left on a fast-break bucket by Babcock, but Liam Manning scored the final four points of the quarter to give the Green Hornets a 35-27 lead heading into the final eight minutes.

McClure drained another 3-pointer on Wellsboro’s first possession of the fourth quarter to stretch the Wellsboro lead to 38-27.

After Lister knocked down a runner in the lane to cut the deficit to 38-29 with 6:55 left in the fourth quarter, Wellsboro used a 9-2 spurt — capped by an old-fashioned three-point play Callahan — to take a 47-31 lead with 5:07 remaining in the contest.

The Wildcats made just 14 of 51 shots to this point, but made 8 of 10 down the stretch, including four 3-pointers. They were also 3 of 10 from the free-throw line for the game..

“We can’t continue to miss easy lay-ups, and miss free throws,” said Lister. “It’s stuff we work on every single day, and talk about all the time.

“I’ve told you, it’s a simple formula: play defense, make lay-ups, make fouls shots, and win basketball games,” noted Lister. “We have to do that.”

With 4:51 remaining in the contest, Brown buried a 3-pointer, and junior Nalen Carling followed with an old-fashioned three-point play to cut the deficit to 47-37.

After a free throw by Connor Adams pushed the Wellsboro lead back to 11 points,  Carling knocked down a short jumper, and junior Tucker Brown drove through traffic for a lay-up to trim the deficit to 48-41 with 3:39 left in the game.

Carling kept it going with a long 3-pointer from behind the top of the key to cut the Wellsboro lead to 48-44 with 3:02 remaining.

On Wellsboro’s next trip down the court, Babcock blocked a shot, and then got out in front of the fast break for an uncontested lay-up. Moments later, Lister picked up a steal, and found junior Shayne Reid for a lay-up in transition to tie the game at 48-48 with 2:08 left in the game.

After an Athens timeout, Keane scored on a short jumper to put Wellsboro up 50-48 with 1:42 remaining. Moments later, Adams registered a steal and was fouled on his way to the bucket. He made 1 of 2 to up the Green Hornet lead to 51-48 with 59 seconds left.

With 47 seconds remaining, Lister buried a 3-pointer from deep in the corner to tie the game. After a defensive stop by the Wildcats, Lister drained another 3-pointer with 10 seconds left to give them a 54-51 lead.

Wellsboro’s game-tying 3-pointer rimmed out, and Manning’s tip-in at the buzzer provided the final margin.

Keane scored 15 points and grabbed 11 boards, and Manning tallied 14 points and hauled down 13 rebounds to lead Wellsboro, while McClure had 13 points, and Callahan added 11 points.

Athens, now 2-2, returns to action Saturday when it hosts NEB. The JV game tips at 4 p.m.