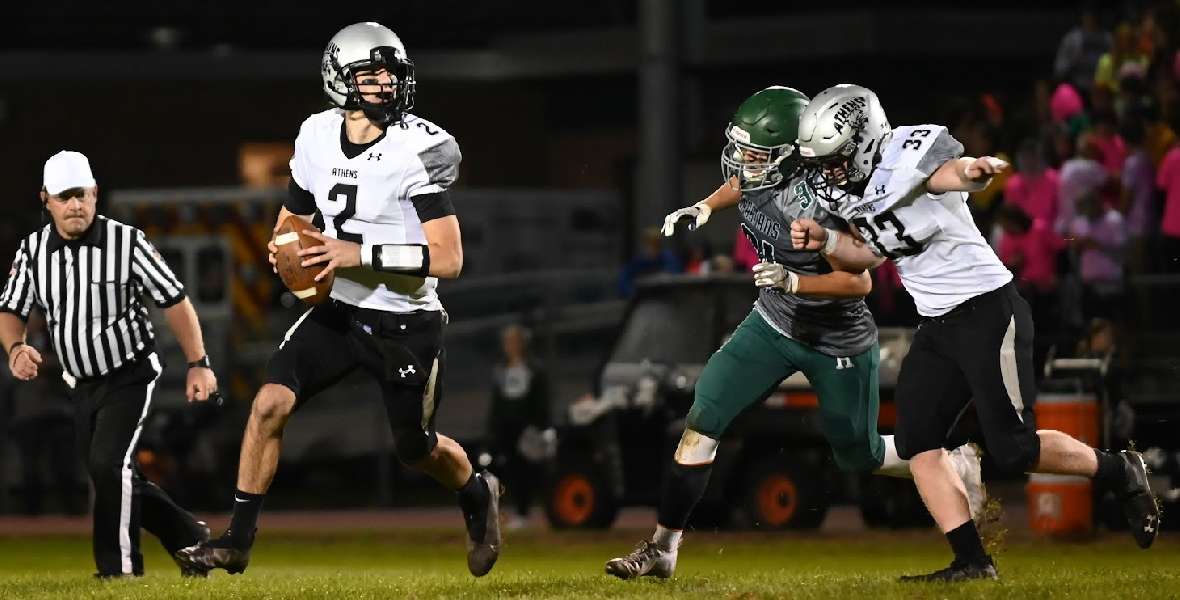 HUGHESVILLE — It was a night of big plays for Athens, which scored five TDs on plays of 34 yards or more, in a 50-0 demolition of Hughesville here Friday night in non-league football action.

“We came in and we executed,” said Athens coach Jack Young. “We got sloppy a couple times, but we made plays. That is what good teams have to do.”

The Athens defense made the first big play of the game, stopping the Spartans on downs at their own 45 on the first possession of the contest.

Junior QB Mason Lister put the Wildcats on the board quickly, connecting with senior Karter Rude on a 45-yard TD pass on their first play from scrimmage. Senior Shayne Reid’s PAT kick made it 7-0 with 8:06 remaining in the first quarter.

The Spartans put together their best drove of the night on their next possession, behind the hard running of Brenden Knight, but missed a 29-yard field.

Athens took over at its own 20, and Reid broke loose on an 80-yard TD run on the the first play of the possession. Reid tacked on the extra point to make it 14-0 with 3:06 left in the first quarter.

On the first play of the second quarter, Rude intercepted a long pass at the Wildcat goal line, and returned it to the Athens 45.

Athens’ first two possessions in the second half ended in frustration.

The Wildcats were stopped at the Hughesville 1 on its first possession, then missed a 28-yard field goal on its second.

Moments later, however, a big hit resulted in a fumble, which Hughesville recovered in the end zone for a safety that gave Athens a 23-0 lead.

The rest of the game was an avalanche of points for the Wildcats.

Athens took the ensuing free kick, and drove for a score. Reid capped the drive with a 23-yard TD reception from Lister to make it 30-0 with 2:39 left in the third quarter.

The Spartans returned the ensuing kickoff into Wildcat territory, but the Athens defense shut down the possession quickly.

Athens put together a five-minute drive, capped by a 34-yard TD connection from Lister to 6-5 senior J.J. Babcock to make it 36-0 with 9:32 remaining in the contest.

After a Jared Peterson interception  on Hughesville’s next possession gave the Wildcats the ball back, junior Caleb Nichols broke loose on a 70-yard TD run with 6:51 left in the game.

The Athens defense got the ball back one last time, and freshman Kolsen Keathley found paydirt on a 40-yard TD run. Reid’s seventh PAT in eight attempts made it 50-0 with 1:35 remaining.

Lister completed 11 of 16 passes for 203 yards and three TDs, without being intercepted.