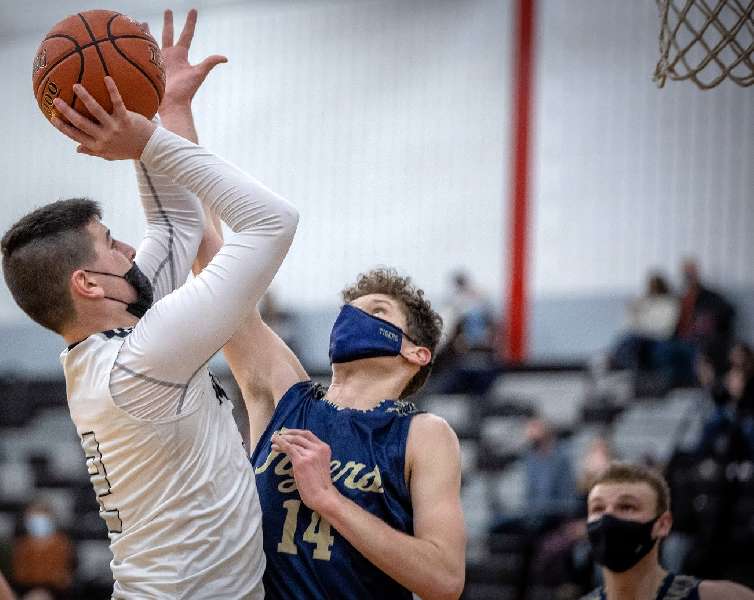 ATHENS — Athens used a 14-0 second-quarter run, fueled by eight points in 50 seconds from junior Shayne Reid, to overcome an early deficit on its way to a 78-61 win over North Penn-Mansfield here Wednesday night in NTL Large School boys basketball action.

The Wildcats built an 18-9 lead with 2 /12 minutes remaining in the first quarter, but the Tigers closed the stanza with 13 straight points, then scored a quick bucket in the second quarter to take its biggest lead of the game, at 24-18.

“We came out of the gate strong tonight, right from the get-go,” said Lister. “We were rolling, then we just took our foot off the gas, and let them get back in the game.

“I wasn’t real happy, so I gave the guys a real hard time, and they responded,” added Lister.

The Wildcats forced NP-M into 20 turnovers, which created plenty of fast-break opportunities in the contest. They combined for 19 assists.

“We moved the ball well, and we were attacking the rim — our transition game has been really good,” said Lister. “And, we’ve been playing really good defense.

“I keep going back to that same old formula: if you play defense, you make lay-ups, and you make free throws, you win basketball games. That’s what we’re doing right now,” added Lister.

“It’s something we work on in practice,” said Lister. “It’s a team game, I want to pound it inside. I want my bigs touching the ball. When that happens, good things happen, and it did tonight.”

Babcock pumped in 12 points, and junior Nalen Carling added a pair of buckets as Athens jumped out to an 18-9 lead, but Alex Stein scored seven of his 12 first-quarter points in a 13-0 Tiger run to end the quarter.

Freshman Carson Dominick gave NP-M a 24-18 lead on its first possession of the second quarter, but it would be nearly five minutes before they scored again. By that time, Athens led 32-24.

Carling triggered the Athens run with a putback on the offensive boards, then added a lay-up in transition, as well as a free throw to convert the old-fashioned three-point play that trimmed the deficit to 24-23.

Babcock, off a feed from Lister, gave Athens the lead for good with a fast-break bucket, and a Carling steal moments later turned into a lay-up by junior Tucker Brown to give the Wildcats a 27-24 lead.

Reid then scored on a driving lay-up in transition, and drained a 3-pointer to cap the run.

After a 3-pointer by NP-M’s Curtis Craig, Reid answered with another 3-pointer to make it 35-27.

“If someone’s feeling it, get him the ball,” said Lister. “Shayne (Reid) was feeling it today.

“It was his best game of the season so far,” he noted. “He was pushing the ball hard, he was making things happen, and his jump shot was there today.

“I keep saying it about this team: it could be anyone,” added Lister. “I have nine or 10 kids who can play basketball, and on any given night one of those kids can step up and deliver, and tonight was Shayne Reid’s night.”

A pair of free throws by Stein cut the lead to 35-29, but junior Troy Pritchard answered for the Wildcats with two free throws, and Lister and Reid followed with back-to-back buckets to make it 41-29.

Dominick scored on a shot jumper to make it 41-31, but Brown and Reid scored on drives to the bucket in the final 30 seconds of the half to give the Wildcats a 45-31.

The teams would trade buckets, with Tucker Brown’s lay-up giving the Wildcats a 60-41 lead, until the Tigers reeled off nine straight points to make it 60-50 with 20 seconds left in the third quarter.

Reid stopped the bleeding with a driving lay-up off the glass to give the Wildcats a 62-50 lead heading into the final eight minutes.

Athens kept it going in the opening minute of the fourth quarter with buckets by Carling, Reid and Babcock to make it 68-50.

Athens, now 5-2, has won four straight after losing two of its first three.

“I’m gonna go back to Tucker Brown’s 3-pointer against Wellsboro when we were down 16 in the fourth quarter,” said Lister. “Whatever was in that shot was magic, and the guys have responded ever since.”

Athens returns to action Friday when it hosts Wyalusing in a game that will be broadcast on Choice 102.1.