ATHENS ROLLS TO 44-6 VICTORY OVER HANOVER IN SEASON OPENER 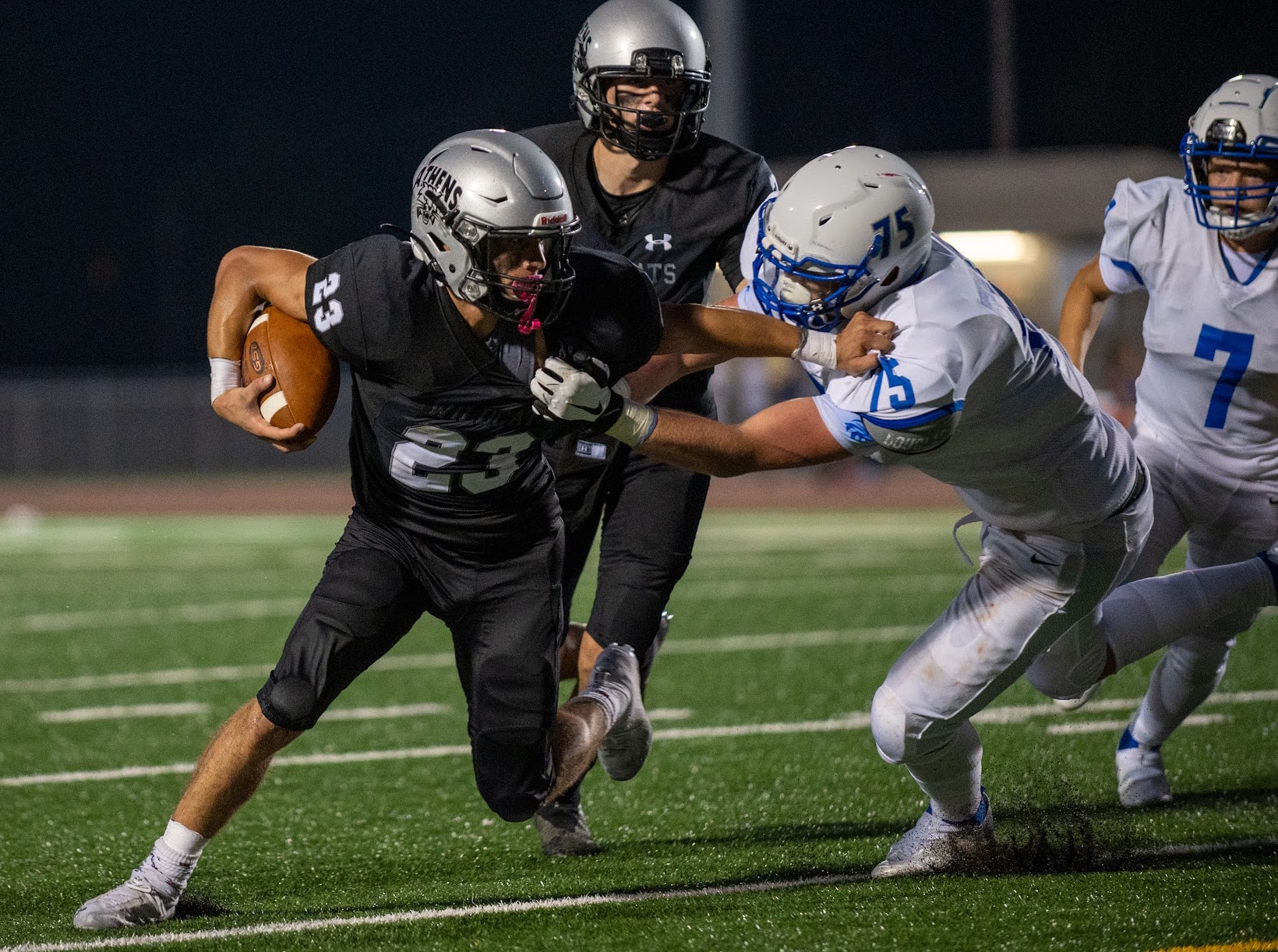 The Wildcats scored on six of their first seven possessions in the non-league contest. Four touchdowns came through the air as they built a 30-6 halftime cushion.

"Anytime you can win a game like that, it's a good feeling," Athens coach Jack Young said. "We did a lot of good things and we have a lot of places to improve on, but we'll take it.

"A lot of people contributed on both sides of the ball."

Troy Pritchard's sack to force a Hanover punt set up the game's first score. Junior quarterback Mason Lister connected with Karter Rude on a 26-yard TD strike in the corner of the end zone with 8:01 left on the first-quarter clock. Shayne Reid's PAT kick made it 7-0.

The Hawks turned the ball over on downs on its next possession and Athens turned it into a a 5-yard scoring run by Caleb Nichols. Xavier Ankner blocked the PAT attempt, leaving Athens up, 13-0, with 2:06 to go in the period.

Hanover would punt again, but Lister was intercepted by Jake Zola on the next series and he would return it to the Athens 21. Three plays later, Zola pulled down an 18-yard TD pass from Christian Torres, but the kick was blocked and the Wildcat lead was 13-6 with 10:57 left in the half.

Athens took a bloop kickoff at its own 38 and Reid picked up 43 yards on two carries. Following an exchange of penalties and a pair of short runs by Chris Bathgate, Lister hit 6-foot-5 wide receiver JJ Babcock in the end zone and Reid's PAT kick pushed the lead to 20-6 with 8:01 remaining before intermission.

The Hawks turned the ball over on downs at their own 32, setting up Athens for another TD. This time,  Lister connected with Reid on a 26-yard TD pass, and Reid's kick made it 27-6 with 4:41 left in the half.

On the Wildcats' next possession, Reid kicked a 29-yard field goal with 61 ticks on the first-half clock.

Jared Peterson picked off a Torres pass with 32 seconds left in the half and Lister took a knee to end the half with his team up, 30-6.

Athens' ability to take advantage of the run and pass possibilities played into its big lead.

"You've got to open things up," Young said. "We had a couple of penalties that killed us, which killed us on the kick off and gave them field position and I think we sulked a little bit. We felt sorry for ourselves."

The Wildcats were flagged seven times for 65 yards.

Peterson opened the second half with a 41-yard kickoff return to the Hanover 35. Six plays later, Reid, who appeared to be stuffed at the line of scrimmage, squirted through the line for a 14-yard scoring run and his kick gave Athens a 37-6 cushion with 8:39 on the clock.

The Hawks responded with 64-yard Torres-to-Sean Dooner TD pass, but Dooner was flagged for pushing off and the ball came back to the Hanover 21.

The next several minutes saw a few Athens defensive gems. Brandon Jennings sacked Torres, teammate Ethan Wilcox crunched Jeremy Vega for a 5-yard-loss as he received the handoff, Pritchard received credit for a second sack when Torres bobbled the pigskin and took a knee, and Skylar Matthews added a sack.

Pritchard's initial sack of the night on Hanover's first possession was the Wildcats' first big play of the game and was notable as Pritchard wears the No. 13 jersey and the team has 13 on their helmets — a tribute to Brayden Taylor Murrelle, a Class of 2019 graduate who passed away earlier this year.

Jaden Wright scored Athens' final TD on a 5-yard run with 7:09 remaining in the game and Reid's kick made it a 44-6 final.

There were some mental mistakes which the Wildcats need to clean up if they hope to continue performing at a high level.

"We've just got to keep getting better.in the first half. We got a little sloppy and as we talked at halftime, some of that when we're substituting and not creating chaos, that's just as much on the coaches as the players, so we've got to improve there. We've got to get better in the mental part of the game."

The Wildcats received some nice efforts from Kolsen Keathley, who rushed for 47 yards on six carries, and Wright, who tacked on 43 on six runs.

Young likes what he saw in the opener, but also knows the areas which need improvement.

"I think we've got to get better on special teams, but we’ll take it, week one against an opponent we've had a couple dog fights with the last few years and they've got some tough kids," Young said. "They've got some linemen that can really play and I felt like, without looking at film, our offensive line played pretty well."