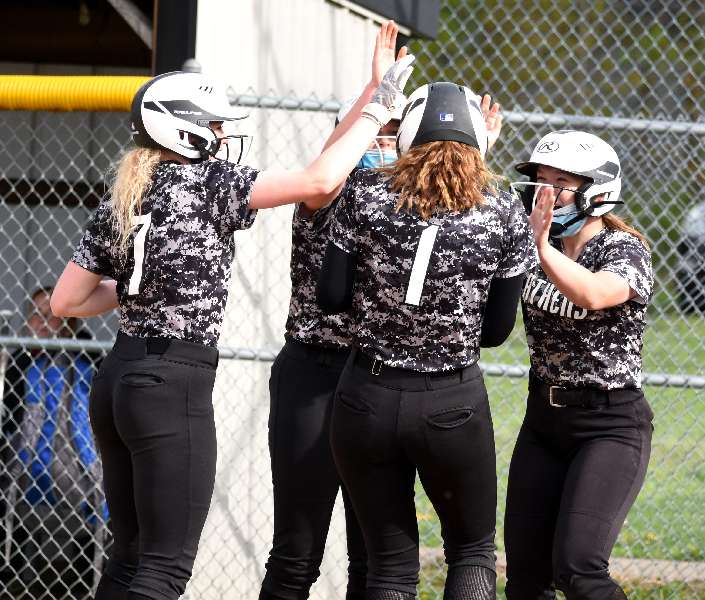 Athens coach Mickey Farrell believes there were several factors in play for the Lady Wildcats, who dropped a 5-4 decision at Wellsboro on April 13 for their first loss of the season.

“I think the fact our kids understand more of how important these games are now. They’ve been working their tails off,” he said.

“The difference tonight was we were very aggressive at the plate. (Kerrah) Clymer pitched very well against us over there,” noted Farrell. “I think what helped us tonight was facing (Waverly’s Hali) Jenner, (Tioga’s Kindra) Wessels, and (Towanda’s Maddie) Maynard in the last three games. We’ve seen some really good pitching, and we’ve hammered all of it.

“The confidence level of these girls right now is huge,” added Farrell. “I think that made a big difference, too.”

Wellsboro took a 2-0 lead with a pair of runs in the top of the second inning, but the Lady Wildcats answered in the third inning.

Senior Mallory Mummert led off the third with a single, and ended up on third base after a two-out single by senior Audrey Hatch, and a walk to senior Harley Sullivan to load the bases.

Macik then knocked a 2-1 over the fence to give the Lady Wildcats the lead for good.

“Macik ignited everything for us,” said Farrell. “We loaded the bases, and she popped one out to put us up 4-2, and we steamrolled them from there.”

Athens added five more runs in the fourth inning in a rally that featured an RBI single by Mummert, and a two-run double by Macik to cap the scoring.

After Wellsboro plated a run in the top of the fifth, Athens scored four times in the home half of the stanza to invoke the 10-run “mercy” rule. The fourth run was scored on a bases-loaded walk to Macik.

Sophomore Aliyah Butler earned the win for the Lady Wildcats. She allowed three runs on five hits, while striking out one and walking four in a complete-game, five-inning effort.

Farrell said Athens played well in every facet of the game.

“Butler did a nice job, she pitched pretty well,” he said. “She wasn’t at her best, but she went all five innings for us.

“And, our defense played well behind her,” Farrell added.

Farrell pointed out a pair of defensive plays in the outfield — by Alli Thoman and Macie Coyle.

“We had two outstanding catches by our left fielders,” said Farrell.

“Alli Thoman jumped as high as I’ve her seen her jump, and snagged one out of the air,” he noted. “It was going for a double, maybe a triple, if she doesn’t catch it.”

“A ball was hit over (Macie Coyle’s) head … she took off and made an over-the-shoulder catch,” added Farrell. “She had her glove hand stretched out as far as it would go. That was an ESPN-highlight catch right there, it was a great catch.”

Hatch singled and scored two runs in the win, while Butler added a single, Sullivan scored two runs and drove in one run, and freshman Ashlyn VanFleet and Mackenzie Morgan each scored one run.

With the win, Athens improves to 14-3 on the season, and takes a 2-game lead over Wellsboro in he Large School standings. Wyalusing has been limited to just one divisional game.

“It’s a big win for us in the division,” said Farrell. “Wyalusing hasn’t played much at all — they have a lot of games to make up, but we have a two-game cushion over Wellsboro.

“These kids deserve this,” noted Farrell. “They know a lot of people didn’t have high expectations for them … they’ve worked really hard because they want to win badly.

“They’re having a lot of fun,” he added. “They practice hard, and they play hard; that’s all I can ask.”