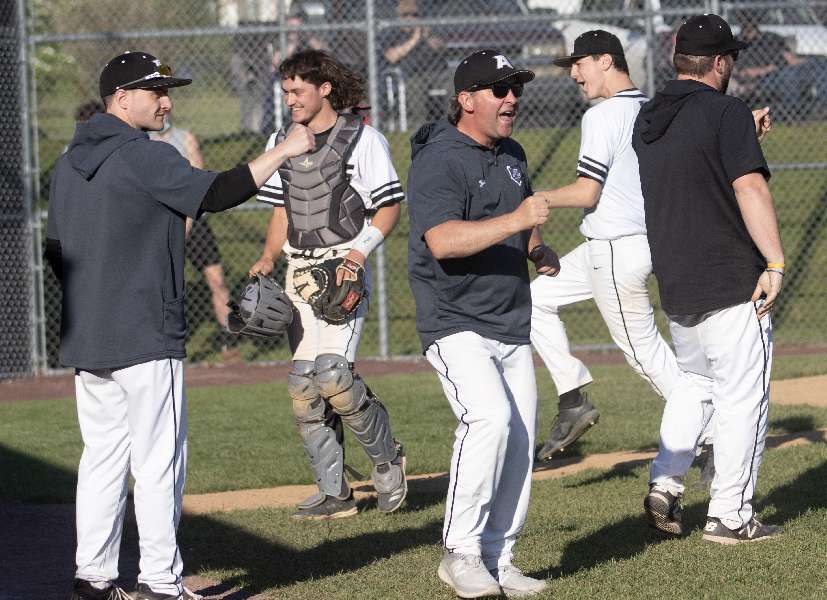 ATHENS — Athens took the lead for good in the bottom of the fifth inning, and put the game away in the sixth in an 8-3 win over North Penn-Mansfield in the regular-season finale here Monday afternoon in NTL Large School baseball action.

The win averages a 6-5 setback at NP-Mansfield for the Wildcats a month ago.

“These games with North Penn-Mansfield this season have been exciting,” said Athens coach Charlie Havens. “They were high-intensity, division-rivalry games — a lot of fun.”

“Mason didn’t have his best stuff, but he really battled and kept us in the game,” said Havens.

“And, Cameron was once again solid in relief. He just seems so relaxed in that situation,” he noted. “No one on or bases loaded he just works quickly and pumps strikes up there.

“He’s been huge for us,” added Havens.

NP-M scored a pair of unearned runs in the top of the third inning to take a 2-0 lead, but answered with two runs in the home half of the frame to tie it up.

Lister led off the fourth inning with a walk, and ended up scoring on consecutive singles by sophomores Lucas Kraft and Jarren Glisson, and Kaden Setzer. The Wildcats missed out on a golden opportunity to increase its lead by leaving the bases loaded after a pair of infield pop outs, and a come-backer to the mound.

The Tigers tied the game with a run in the top of the fifth inning, but the Wildcats used a two-out rally to take the lead for good.

Junior Caleb Nichols singled and stole second, then scored on a two-out double by Kraft to make it 4-3.

In the bottom of the sixth inning, Rude walked, stole second, moved to third on a balk, and then stole home to give the Wildcats a 5-3 lead.

Sullivan earned the win, allowing one run on five hits, while striking out one and walking none in 2 1/3 innings.

Athens wraps up the regular season at 12-8, and now awaits word on the upcoming District 4, Class AAA playoffs.

“I couldn’t be more proud of our guys and how we turned this season around,” said Havens. “Finishing 12-8 is an impressive accomplishment.

“We definitely like where we are at with a few days to practice and rest our arms headed into the postseason,” Havens added.