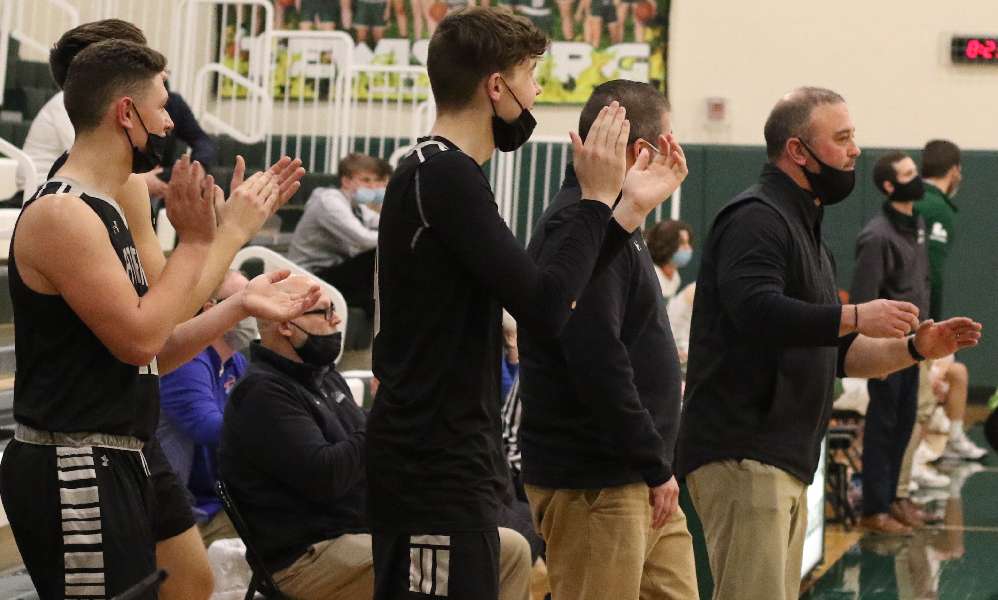 LEWISBURG — Fifth-seeded Athens scored the first seven points of the game, and never led by fewer than four points the remainder of the game in a 55-41 win over fourth-seeded Lewisburg here Friday night in the quarterfinals of the District 4, Class AAAA boys basketball playoffs.

This is the second straight year, Athens has knocked off Lewisburg on its home court in the opening round of the District 4 playoffs. Last year, head coach Jim Lister was an Wildcat assistant coach.

“This feels good,” said Lister. “It was a great experience winning here last year, but as the head coach it’s even better.

“It’s great to come down here and get a big win with these kids,” added Lister. “I’ve been with these kids for a long time. I’ve grown up with them. I love to see them succeed and do well.”

The Wildcats led 9-5 after the first eight minutes, and extended their lead to 21-9 at the half. The Green Dragons never got closer than seven points in the second half.

“Defense was obviously the key tonight,” he said. “You have to play good defense to win games like this.

“We’re young, long, and athletic. When we keep our hands busy, we make it difficult on teams. I think we did that tonight.

The Wildcats had chances throughout the first half to extend the lead, but did little until a 7-0 spurt in the final 1:47 pushed the lead from 14-9 to 21-9.

“I’m still not 100-percent happy with how we’re scoring,” said Lister. “I think we can score better. I think we could have put 75 or 80 points on the board tonight.

Leading 14-9, junior Troy Pritchard gave Athens a 16-9 lead with a putback on the offensive boards with 1:47 remaining in the first half.

After a defensive stop, senior James Benninger-Jones buried a 3-pointer from the wing to make it 19-9 with 1:16 left in the half.

Junior J.J. Babcock finished off the first-half scoring with 18 seconds remaining to make it 21-9 heading into the halftime locker room.

Pritchard scored on a nifty low-post move in the opening moments of the third quarter to make it 23-9, but Lewisburg used a 10-3 spurt, capped by a 3-pointer by Kevin Magyar, over the next four minutes to trim the deficit to 26-19.

Lister answered Magyar’s 3-pointer with one of his own to make it 29-19 with 3:23 left in the third quarter, then on the next trip down the floor knocked down another shot from behind the arc to make it 32-20.

Forest Zeledoski scored five straight points, including a 3-pointer, for the Green Dragons to cut the Athens lead to 32-25 with 1:00 minute remaining in the third quarter.

Junior Tucker Brown answered with 23 seconds remaining, but Lewisburg’s Joey Martin scored in the low blocks with 3 seconds left to close the gap to 34-27 entering the final eight minutes.

Junior Nalen Carling and Lister opened the fourth-quarter scoring with buckets in transition to give the Wildcats a 38-27 lead, and the closest Lewisburg would get the remainder of the game was eight points.

The Wildcats out-rebounded the Green Dragons, 44-23, in the contest, and allowed just six offensive rebounds in the entire game — and just one in the second half.

“We talked about rebounding at halftime,” said Lister. “We needed to pound the boards, and not give up any second-chance points.

“I told the guys when the shot went up, we needed to find someone and box them out,” he added. “I think we did that, especially in the second half.”

Athens was also much more efficient offensively in the second half.

“It was an adjustment we made at halftime,” said Lister. “We wanted to slow up our offense … we needed to run our offense, and get some good looks. We got those good looks, and we made those shots.”

Athens, now 14-9, returns to action Tuesday at top-seeded Danville, which rolled to a 79-30 win over eighth-seeded Midd-West Friday. Game time is 7 p.m.