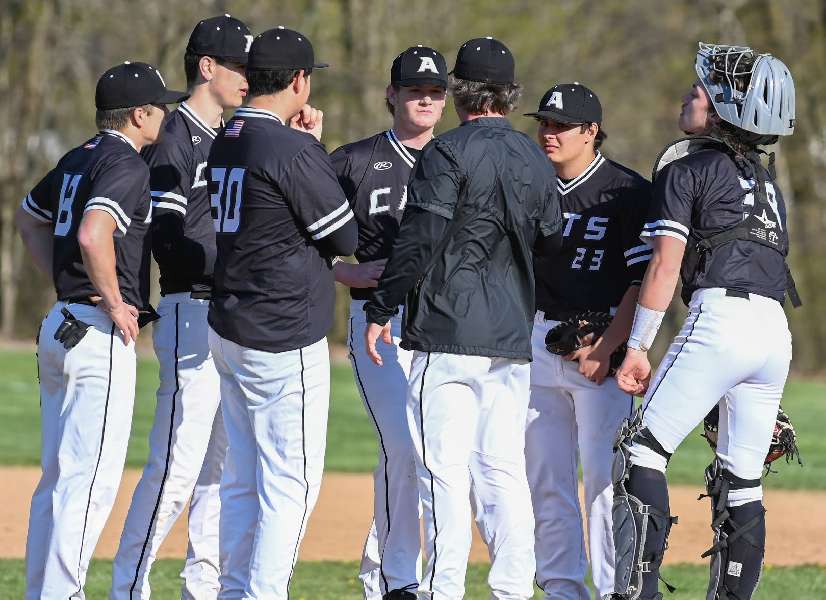 SAYRE — Sayre scored six runs in the bottom of the fifth inning to invoke the 10-run “mercy” rule in a 12-2 win over Athens here Friday afternoon in NTL baseball action on Ralph Hendershot Field at Riverfront Park.

“I felt our hitters were a little off-balance early on,” said Sayre coach Jamie VanDuzer. (Mason Lister) pitched well … I think they had a few of us guessing at the plate.

“We eventually got things together and got some big hits down the stretch,” added VanDuzer. “Overall, it’s a big win for us.”

“Sayre is a tough team with an excellent coaching staff,” said Athens coach Charlie Havens. “They took advantage of the mistakes we made. We had a tough time getting the third out in every inning.

“Sayre did the majority of its damage with two outs,” added Havens.

After Sayre sophomore Lucas Horton pitched around a single by sophomore Caleb Nichols in the top of the first inning, the Redskins took a 3-0 lead in the home half of the inning.

Senior Jake Burgess reached on an error, and junior Brayden Horton worked a four-pitch walk to set the table, and Lucas Horton helped his own cause with a two-run line-drive double to right field.

Junior David Northrup was then hit by a pitch, and senior Zach Moore walked to load the bases, but Lister settled in allowed just one more  run on a one-out groundout off the bat of junior Kannon VanDuzer.

With two outs in the bottom of the third base, sophomore Zach Garrity walked,then scored on an outfield error to make it 4-0.

Sophomore Cam Sullivan led off the top of the fourth inning with a single, but was immediately replaced on the base paths on a fielder’s choice off the bat of Lister. With two outs, sophomore Jaren Glisson ripped an RBI single up the middle.

After a single by Kyler Setzer moved him to third base, Glisson scored on a passed ball to trim the deficit to 4-2.

Sayre responded in the home half of the inning with two runs. With two outs, Brayden Horton lined a double to right field, and was moved to third base on back-to-back walks to Lucas Horton and Northrup that loaded the bases.

An RBI single by Moore, and a bases-loaded walks to Garrity pushed the lead to 6-2.

The Redskins loaded the bases in the bottom of the fifth inning on a pair of walks, sandwiched around a double by junior Mason Houseknecht. With one out, Lucas Horton walked to force home a run, and Northrup flared a two-RBI single to left field to make it 9-2.

An RBI single by Moore pushed the lead to 10-2, and Garrity was hit by a pitch to re-loaded the bases.

After a balk made it 11-2, Houseknecht walked to load the bases again, and sophomore Jackson Hubbard stroked an RBI single to right field to end the game via the mercy rule.

“I was proud of our boys for showing up to compete,” said Havens. “We talked at practice about keeping the game within reach and pushing them a bit. We did that for four innings, but we couldn't close.

“We are improving, but still have work to do,” added Havens.

Lucas Horton earned the win for the Redskins. He allowed two runs — one earned — on six hits, while striking out five and walking none in a complete-game five-inning effort.

“I thought Luke pitched good,” said VanDuzer. “They hit the ball pretty good, but he was able to limit any big innings.”

Nichols and Kaden Setzer each singled twice to pace Athens’ six-hit attack, while Glisson singled, scored one run, and drove in one run, Sullivan added a single, and Lister scored one run.