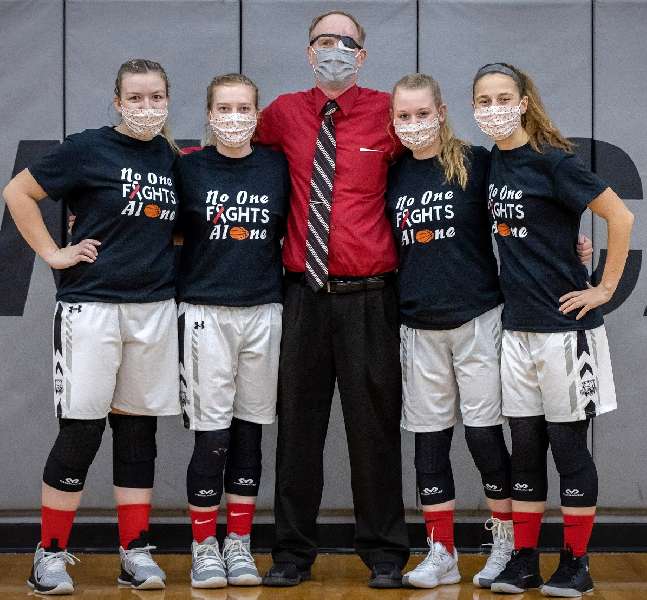 ATHENS — Athens shook off a sluggish first half, and outscored Troy, 40-8, in the second half to deliver coach Brian Miller his 300th career victory — a 53-22 decision over Troy — here Tuesday night in NTL Large School girls basketball action.

Miller, who is in his third year at Athens, won 254 games as head coach at Waverly.

“It has been a great journey for the last 19 years,” said Miller. “I have enjoyed coaching young athletes and having so many successful teams at both schools.

“I have made so many friendships over the years with coaches, referees, parents, media, and many more.

“It has been a great ride and I am lucky person,” added Miller.

It was also a milestone night for Coach Miller’s daughter, Kayleigh, who knocked down her 200th (and 201st) career 3-pointer, and is just one away from tying the school record held by Mallory Hafer.

Senior Megan Collins knocked down a 3-pointer and scored five points in the first quarter to help the Lady Wildcats to a 9-5 lead, but the Lady Trojans used a 9-4 seconds-quarter run to take a 14-13 lead into the halftime locker room.

“We missed some shots versus the triangle-and-two in the first half, and looked a little slow,” said Miller. “Maybe the long road trip to Benton was a factor in that.

“We came out with a lot of energy in the second half and used a lot of pressure to create some nice scoring opportunities,” he added.

Kayleigh Miller knocked down her milestone 3-pointer, and was also 3-for-3 from the free-throw line after being fouled on a shot from behind the 3-point arc, and junior Caydence Macik also scored six points in the frame, while Collins buried her second 3-pointer and scored five points to fuel a 19-4 run that gave Athens a commanding 32-18 lead heading into the final eight minutes.

In the fourth quarter, Collins canned a pair of 3-pointers, and Miller once again connected on a 3-pointer and was 3-for-3 after being fouled on a 3-point attempt. The Lady Wildcats outscored Troy, 21-4, in the final stanza.

Collins led Athens with a career-high 16 points, including four 3-pointers on just six shots from behind the arc, while Macik scored 15 points and hauled down nine boards, and Miller, who was held scoreless in the first half, had 12 points and four steals.

NOTES: The Athens Lady Wildcats all donned T-shirts prior to the game that read “No One Fights Alone” to honor coach Miller, who is successfully battling cancer. … The girls basketball program raised $1,000 for the Sidney Kimmel Cancer Center and donated it in Coach Miller’s name.