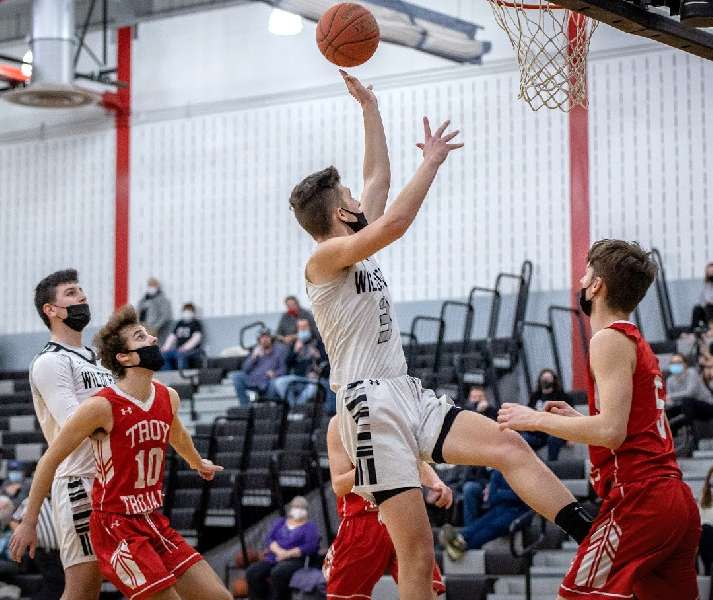 “Ty is a special basketball player,” said Troy coach Steve Renzi. “When the game is on the line, we can depend on Ty (Barrett) to get to the rack.”

Athens coach Jim Lister pointed to his team’s fourth-quarter performance at the free-throw line (1-for-6) after the loss.

“You have to make your foul shots at the end of the game when you’re tired; that’s the key.

“We had them in double-bonus, and we missed five foul shots at the end of the game,” said Lister. “We make those foul shots, we win the game.

The Trojan win, however, wasn’t all Barrett, who was held to 19 points — about seven points below his season average. Jake Deitrick scored a season-high 18 points and grabbed 11 rebounds, and Mason Imbt had 10 points and 12 boards.

“They came out in the second half, and really pounded the boards.

“Usually, you see the box score is a little lopsided, with our guards getting all the points, and our big guys not producing much, but tonight was pretty much opposite,” he added.

“When we played Troy the first time, we were in a box-and-one on Ty Barrett, and Tucker Brown did a really nice job,” said Lister. “He held him to seven points in the first half.

“But where Troy got us was (Ethan) VanNoy in the corner. He killed us from three-point land,” noted Lister. “Tonight, I wanted to take a different approach. I put Mason (Lister) on VanNoy, and he didn’t score many points.

“The game plan was to meet them at half court, play defense, and make them earn every shot they got,” added Lister. “I think we did that.”

The teams traded scores over the first six minutes of the game, until Deitrick scored back-to-back buckets to give the Trojans an 11-9 lead with 1:33 remaining in the first quarter.

After a pair of free throws by Athens sophomore Chris Mitchell tied the game, Nick Williams scored his only bucket of the game with 6 seconds left in the first quarter to give Troy a 13-11 lead.

Ethan Vannoy came up with a steal and lay-up on the first possession of the second quarter to give the Trojans a 15-11 lead, but a pair of free throws and a bucket by 6-5 Wildcat junior J.J. Babcock tied the game at 15-15 with 6:48 remaining in the first half.

After Deitrick gave Troy a 17-15 lead with a nifty one-hander in the lane, Babcock drained a 3-pointer to spark a 9-2 Athens spurt that gave the Wildcats a 24-17 lead with 3:27 remaining in the first half.

Troy trimmed the deficit to 24-20, but Nalen Carling’s old-fashioned three-point play pushed the Athens advantage back to seven points, 27-20, with 2:48 left in the first half.

The Wildcats maintained their lead, and pushed it to seven points, at 37-30, on a nice low-post bucket by Pritchard with 4:03 remaining in the third quarter, but a top-of-the-key 3-pointer by Zeb Oldroyd — his only bucket of the game — with 1:55 left capped an 8-0 spurt that gave the Trojans a 38-37 lead.

The lead was short-lived, however, as Babcock and junior Tucker Brown scored back-to-back buckets to give the Wildcats a 41-38 lead with 55 seconds left in the third quarter.

A pair of Barrett free throws cut the deficit back to one point, but a driving baseline lay-up by Mason Lister with 5 seconds remaining gave Athens a 43-40 lead heading into the final eight minutes.

A spinning move in the lane resulted in a bucket by Pritchard in the opening moments of the fourth quarter, but he missed the free throw to make it a three-point play, and Athens led 45-40.

Moments later, Imbt scored on a putback and made the free throw to complete the old-fashioned three-point play to trim the deficit 45-43.

Imbt and Deitrick then added putbacks on the offensive glass on consecutive trip down the floor for the Trojans, giving them a 47-45 lead with 6:35 remaining in the contest.

Babcock gave the Wildcats the lead back moments later on a fast-break lay-up and a free throw to make it 48-47 with 6:12 left in the game. It was Athens’ last lead of the contest.

Pritchard scored in the low blocks, thanks to a nice pump fake, but missed the free throw after being fouled on the shot.

A driving lay-in down the lane by Barrett with 4:13 remaining gave the Trojans a 53-50 lead.

Athens missed the front end of a one-and-one with 3:31 remaining, but a fast-break lay-up by Babcock, off a steal by Lister, trimmed the deficit to 53-52 just 26 seconds later.

Things seemed dire for the Wildcats moments later after a pair of missed free throws, but they turned up the defensive pressure and scored three quick buckets to tie the game with 36 seconds remaining.

Carling started the spurt with a steal and breakaway lay-up, then Brown scored on a putback of an errant lay-up in transition, and Babcock scored on a lay-up, off a long outlet pass on the break from Pritchard, to cap the 6-0 run.

Troy milked the clock into single-digits, then Barrett took the ball near the Troy bench, cut across the top of the key, and down the lane, kissing the ball off the glass for the game-winner.

After a time-out, a long in-bounds pass for Athens was batted away from Babcock, and the final horn sounded as the ball rolled out-of-bounds.

“The kids had a hell of an effort tonight. I think that’s the first time this season we’ve played four full quarters,” said Lister.

“I’m proud of the guys, they’ve played very well the last two games. I told them after the game, if they continue to play the way they did tonight, we’ll be right there in the end,” he added.