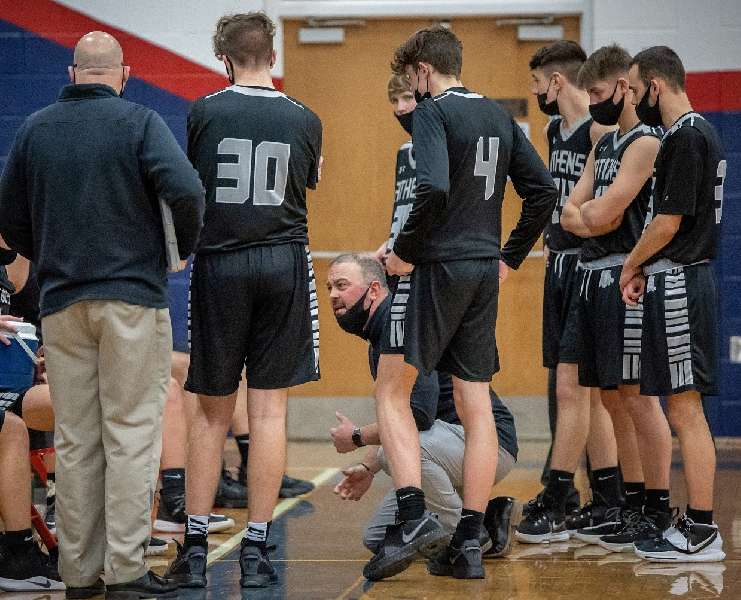 “I think we have a little bit of everything,” he said. “We have guards who can handle the ball, we have kids who can score, and we have size in the paint.

“We have all the right tools, we just have to put it together,” noted Lister.

“I keep telling our guys: “if we play defense, make lay-ups, and make foul shots, we should win basketball games,’” added Lister.

Lister cites team unity as a strength in 2021.

“I think the team attitude and the team play is the biggest strength for this team,” he said. “I’ve seen a lot of good communication the last week … these kids have played together for years, so they know one another.

“I think we lost a little of that last year,” noted Lister. “We didn’t have it at certain times and it cost us. When we got beat at Northeast, we didn’t play team basketball, and that was a game-changer for us.

“We had a big meeting after that game … we talked about being a team, and we went on a seven or eight-game run after that,” Lister added. “I think that proved to the kids how we need to play this game.”

Lister also expects the balance, versatility and depth of his roster to be a big strength.

“I think you can expect a lot of team basketball, and not one individual that you have to stop. You’re going to have to stop five guys,” he said.

“I can put a solid eight or nine on the floor at all times, and I can move them around and play them at different positions,” noted Lister. “I won’t be too concerned about foul trouble this year.

“Playing with these masks is another situation we’re going to have to deal with,” he added. “I think it’s going to be an issue for everybody, having a bench is going to be a key for everyone. Kids are going to get tired in a hurry, especially if you play any type of pressure defense.”

While not a concern, Lister knows his team will have to play defense.

“We need to play defense to be successful,” he said. “I think we can score points, and I think we can push the ball and make things very difficult on opposing defenses, but we will need to get back and play defense.

“Some times when you have a high-scoring team, they may give up a little bit on the defensive end of the floor,” added Lister. “We can’t afford to play that way.”

Lister knows he has one of the better players in the league in Babcock, and also knows the remainder of the starting five are known commodities around the league. He believes Carling and Benninger-Jones could open some eyes.

“Nalen Carling has grown … he loves the paint, he loves to rebound, and he has a really good work ethic,” said Lister.

“Nalen has the ability to shoot threes, he loves to pound underneath in the paint, and he can run the floor,” noted Lister. “I think he’s definitely going to surprise some people.

“James Benninger-Jones didn’t play last year, but he’s come out this year and really opened my eyes,” added Lister. “He does a lot of good things, and I think he’ll contribute a lot to this team.”

AROUND THE NTL
“I expect a very competitive league. I think we’ll have to be at our best every night to win,” said Lister.

Large School Division
“Troy is going to be tough. Ty Barrett is just an excellent basketball player,” noted Lister. “And, Wellsboro and Mansfield are always good.”

Small School Division
“Even without (Ben) Knapp, Canton is going to be a good basketball team.

“Northeast Bradford had our number last year, so we won’t take them lightly in any way, shape or form,” said Lister.

“And, I know all the Sayre kids,” added Lister. “They are loaded with athletes, and should battle with everyone.”

Athens opens the 2021 campaign this afternoon at Williamson.