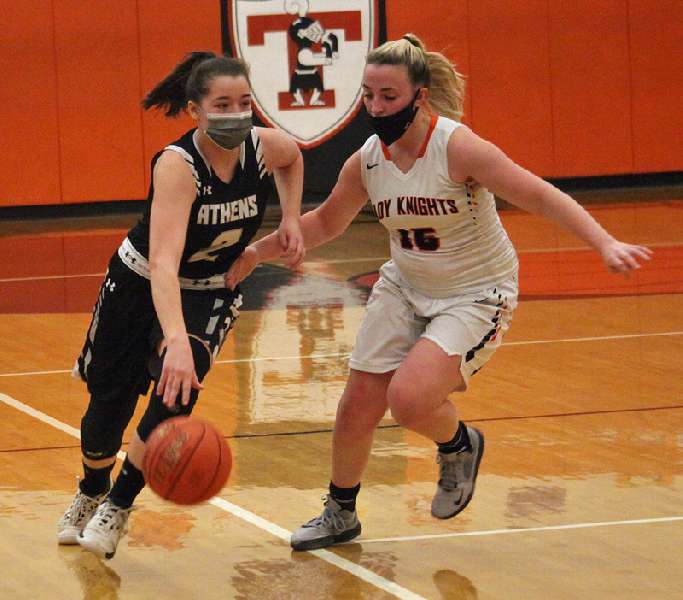 Valley Sports Report
TOWANDA — For three quarters, Athens outplayed Towanda, taking a 31-26 lead into the fourth quarter. Then, disaster struck, as they were outscored 19-5 in the final frame to fall to the Knights, 43-36, in NTL girls’ basketball action Saturday.

“They went to that 2-2-1 three-quarters court trap,” explained Athens coach Brian Miller. “They ran that earlier in the game, and we handled it effectively, but we struggled big time with it.

“No matter how many timeouts I called, or what I showed them on the board, we struggled with finding the open girls, making the open pass over Paige (Manchester) and Porschia (Bennett), who are up front.”
That overshadowed a much better performance for Athens after coming off its loss to Wyalusing Thursday.

“We did play a lot better today,” said Miller. “I was proud of my team. We had a great three quarters of basketball, and then we had some brain dead stuff. Against a good team like Towanda, you can’t fall that far behind too many times.”

Caydence Macik had the big game for Athens with 18 points, but Kayleigh Miller was limited to just five points. The Wildcats did get more support from their other players as Megan Collins had five points, Karlee Bartlow netted four, and Rachel Stephens and Hannah Blackman had two points apiece.

Macik also had eight rebounds, three assists, two steals, and one blocked shot for the Wildcats, while Miller had five rebounds, and Bartlow grabbed four boards.

If it wasn’t the Towanda press hurting Athens, it was them giving up offensive boards.
“They killed us on the boards,” said Miller. “Whether it was man-to-man or zone. Erin Barrett really stepped up and had a good fourth quarter to take that team to victory.”

Athens did limit Porschia Bennett to just five points, but she had five steals and hounded Miller all night long. Ally Hurley chipped in with four points and five rebounds and Kendie Packard scored one point.

The Knights didn’t shoot the ball well — they had three 3-pointers and one was a Manchester half-court heave at the buzzer in the second quarter — but they were able to make up for it with all the offensive rebounds. That, combined with Towanda’s late press, was too much for the Wildcats to stave off.
Regardless, despite Athens’ loss Thursday night, Towanda coach Rob Gentile knew they were going to get the Wildcats’ best.
“We fully expected this,” he said. “They were highly motivated to play hard, and they competed well.”
It was a game of runs with Towanda making the first one as they jumped out to a 5-0 lead in the first quarter.
Barrett led things off with a lay-up, and Bennett had three points after her.

The Wildcats got on the scoreboard at the 4:40 mark as Macik had an old fashion 3-point play. She would tie the game up on Athens’ next possession with another lay-up.

Hurley answered with a 3-ball followed by back-to-back lay-ups from Barrett and Manchester to put the Knights up 12-5.

Athens finished the quarter strong as Macik had a lay-up, followed by a Collins jumper to cut it to 12-9 at the first break.
Two Macik free throws cut it to 12-11 to start the second quarter, but a Manchester 3-pointer put an end to that run. After a Packard free throw Towanda led 16-11.

That’s when Athens made a 10-2 over the middle of the second quarter. Two points by Stephens and Miller cut it to 16-15, though a Barrett bucket ended that run and put the Knights back up 18-15.

It looked like that was going to be the halftime score when Manchester hit a half-court shot at the buzzer, erasing the lead and taking back all the momentum Athens worked hard to get.

Towanda started the third quarter strong as Barrett and Manchester hit back-to-back buckets, followed by a Hurley freebie to extend the Knight lead to 26-21.
But that’s all the points they scored in the third, giving Athens a chance to take control of the game.
And the Wildcats took it, as they got back-to-back 3-pointers from Bartlow and Miller to go up 27-26 with 1:50 left in the quarter.

Then came the Towanda onslaught as the Knights scored the first 11 points of the fourth quarter, all in the first four minutes.
Athens could barely get the ball past half court during that stretch, while on the other end Barrett scored seven of the 11 Towanda points, four of them on putbacks. Manchester had two steals followed by lay-ups, then assisted Bennett off a steal to end the run, putting Towanda up 39-31.
Athens made a mini-rally over the next two minutes as Macik hit Blackman for a bucket, followed by a Macik putback to cut it to 39-35, but that’s as close as it got.
Fittingly, Barrett secured the game, first with a putback with 40 seconds to play, then with a block with 26 seconds left. She finished off the ensuing possession with a lay-up to shut the door.

The loss drops Athens to 7-2 in the league as Towanda improves to 8-0.

The Wildcats will look to get back on track next Tuesday as they host Troy.