HUGHEY'S GAME-WINNER IN FINAL MINUTE LIFTS ATHENS TO 2-1 WIN OVER WELLSBORO, AND INTO FIRST PLACE 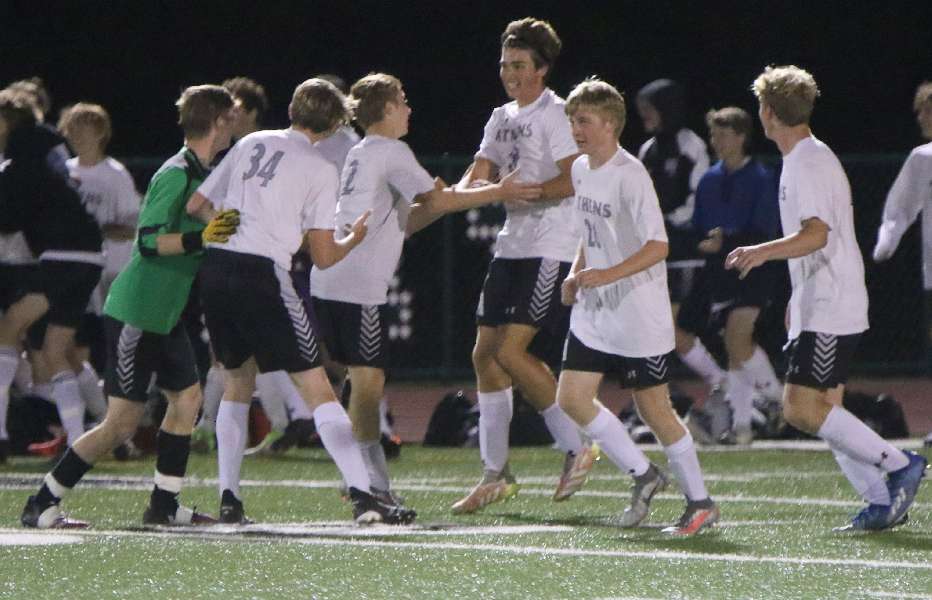 WELLSBORO — Senior Mason Hughey drove a shot from the left hash into the net inside the far post with 60 seconds remaining in the game to lift Athens to a 2-1 win over Wellsboro here Tuesday afternoon in NTL boys soccer action.

The win put Athens in sole possession of first place in the NTL with a 7-1 league mark, while Wellsboro falls to 6-1-1.

The Green Hornets got the better of play in the first half, but the Wildcats, thanks to the play of senior keeper Levi Kuhn and the defensive back line, spearheaded by sophomore Alex Campbell, kept them off the board.

“(Wellsboro) put us under a lot of immediate pressure, but the guys made some great plays,” said Athens coach Jake Lezak.

“Levi’s been flying all over the place,” he noted. “We’re pleased with what’s going on there, and definitely with our back line.

“They had a lot to deal with. Wellsboro is tough up top, they’re very physical and quick,” added Lezak. “It was nice to get out 0-0 at the half.”

With 27:48 remaining in the contest, Hughey took a feed from senior Nate Quinn, and made a run down the right hash. He was tripped up in the box, and drove home the resulting penalty kick to give the Wildcats a 1-0 lead.

“Nate (Quinn) played a beautiful ball in, and I just took it line,” noted Hughey. “I beat the defender, and had an open lane to the goal … and he tripped me from behind.”

“I was just focused on burying it in the goal,” said Hughey of the penalty kick. “The Wellsboro kids were talking around me, trying to get in my head, but I just had to tune them out.

“I saw the goalie go one way, so I went the other,” added Hughey. “He went to the left, which is where I was going to go, but I saw him move, so I went right. It was a last-second switch … I was a little scared I was going to pull it right.”

With 10 minutes remaining, Wellsboro’s Peyton McClure headed a shot past Kuhns to tie the game at 1-1. The goal came off a corner kick, and was the third header in a sequence which the ball never hit the ground.

The Green Hornets pressured the Athens goal for several minutes, but were unable to get the go-ahead score.

With a little more than a minute to play, the Wildcats countered and Quinn found Hughey open down the left hash.

With a defender a half-step behind on his right hip, Hughey ripped a shot with his left foot that crossed the goal mouth and ripped into the net just inside the far post with 1:00 left on the game clock.

According to Lezak, the goal was the result of a halftime adjustment.

“We talked about some things at half, and shuffled a couple of guys around,” said  Lezak. “We moved Mason (Hughey) back to the left-side to put pressure on there.

“We were working with the guys on pressing in the corners, and taking the corners — getting it deep in the 18 and doing those things,” added Lezak. “It paid off.”

“Originally, I was going to go right wing, but there was a last-minute switch to the left,” said Hughey. “The guys had been playing balls in all day, and I was barely missing them.

“That one from Nate was perfect, and I took it line, and went across my body (with the shot),” he added. “The keeper made a good effort, but it was just out of his reach.”

Lezak was impressed with the game-winner.

“That was a great goal,” he said. “That’s what we look to do, we force the issue in training. It was a great series.

“We yell at the guys in practice to keep the ball rolling. We need to look fast,” noted Lezak. “You take guys with average pace, and some quick guys and you make them look faster because the ball continues to roll.

“It disorganizes a defense. … it was the quick combination we’ve been hoping for,” he continued. “We’ve done it in a lot of games.

“We were finally able to catch (Wellsboro) in transition, where we were able to slide it behind, and Mason was able to get the corner, and get deeper into the 18. And, it was a great finish,” Lezak added. “He’s got a great left leg.”

In their first meeting this season, Wellsboro ripped the net for five goals in a 5-3 win at Alumni Stadium.

Lezak said his team has put in a great deal of work since then to ensure there would be no repeat performance by the Green Hornets.

“We’ve caused ourselves a lot of headaches in the back. I think the boys have worked really hard for this.

Hughey was pleased to get a bit of redemption.

“It feels amazing to come over here and win a game against a very talented Wellsboro team,” he said. “I’m sure we’re feeling the same way they did winning on our turf.”

The Wildcats, now 9-6 overall, can clinch the league title with wins over Galeton Thursday, and Troy on Oct. 23.

“(This win) has to feel great for the guys, but it’s not over yet,” said Lezak. “We still have two more league games before we lock anything down.

“Hopefully, we build off of this, and finish the season strong heading into the postseason,” he added.