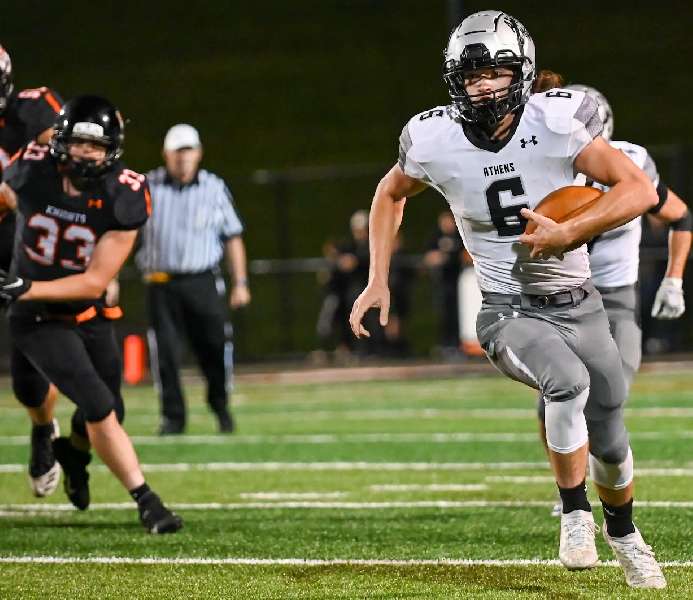 “It’s a great feeling, because I’m happy for the kids,” said Athens coach Jack Young. “Last week was a tough loss, but we had kind of a goofy week this week. We got a little sloppy at times, and we got a lot of kids some playing time, so that’s really good for us.”

Lister had a four touchdown night - three rushing, one passing - as he gave the Towanda defense fits with his ability to make things happen.

“We’ve talked about that a little bit, about our decision making, and put the thing away,” Young said about Lister. “He took care of the ball a little better tonight, at times, and he also took off. He’s got to know that he can beat some people with his feet. He’s starting to do that a little bit, and it’s only going to make us better.”

Lister ran the ball eight times for 67 yards to go with his three scores, while he was 7-for-8 for 138 yards, and a touchdown, through the air.

Shayne Reid led Athens in rushing with 110 yards on 12 carries, while Caleb Nichols had 30 yards and a touchdown on three rushes. As a team Athens ran the ball 34 times for 242 yards.

Karter Rude had a big day at receiver, hauling in four catches for 108 yards and a score, while JJ Babcock had two catches for 18 yards.

Freshman Riley Vanderpool was everywhere for Towanda, running the ball 17 times for 47 yards, while also getting six receptions for 51 yards. Rhyan West had 31 yards rushing on five carries, but left the game at the half.

Athens took the opening kick-off at their own 32-yard line, and needed just six plays to hit pay dirt. A 36-yard pass play from Lister to Rude on the third play from scrimmage set them up at the Towanda 10-yard line. Three plays later Lister punched it in from the one to put the Wildcats up 7-0 on the Reid extra point.

Towanda was able to get a first down on their initial drive, but it fizzled out and they were forced to punt.

The Wildcats took over on the Knight 39-yard line, and only needed to plays to score - a 20-yard Reid run, followed by a Lister to Rude 19-yard scoring strike. Reid’s point after was good, and the Wildcats led 14-0 halfway through the first quarter.

After a 3-and-out for Towanda Athens took over at their own 46-yard line. This time they needed eight plays to score, but the Knights didn’t make it easy.

A 20-yard pass play from Lister to Rude, followed by a 17-yard run from Lister, set Athens up at 1st-and-goal from the four.

Their first three runs, though, were stuffed by Towanda. On fourth-and-1 Lister tried a quarterback sneak, and punched it in. Reid’s kick was good, and Athens led 21-0 with 11:51 left in the half.

Towanda’s offense showed some spark in their ensuing drive as Flynn hit Vanderpool for a 13-yard gain. A West 7-yard run on the next play set up a Flynn to Vanderpool 3-yard hook-up for another first down.

West followed that up with a 12-yard run up the gut to get inside the Athens 35-yard line. On the next play, though, West again found room up the middle, but as he was fighting for yards, the ball popped out, and Athens hopped on it to take it back.

Towanda would force them to punt on their next drive, giving the knights good field position at their own 45-yard line.

However, on the first play from scrimmage, Flynn’s pass was tipped, and picked off by Reid. He appeared to take it 65-yards to the house, but it was called back due to a block in the back.

Starting at their own 28-yard line, Athens would need just six plays to score. Big runs from Rude and Nichols got the Wildcats to the Towanda 36-yard line. Four plays later Lister scrambled out of the pocket, down the left side of the field, and snuck into the end zone for a 23-yard touchdown run.

Reid’s kick was blocked, but the Wildcats took a 27-0 lead into the half.

Towanda took the kick-off in the second half, and proceeded to nickel and dime their way down the field.

Starting at their own 38-yard line, they would get off 17 plays to get down inside the Athens 10-yard line. All in all they picked up four first downs, and chewed off 7:46 off the clock, as they converted three third downs, and one fourth down - a 6-yard run by Flynn - to keep the drive alive.

On fourth down at the 7-yard line they tried a field goal, but Logan Lambert’s attempt was just wide left.

The Wildcats took over on their own 20-yard line, and needed seven plays to score. On the second play from scrimmage it was 2nd-and-21 when Lister hit Rude for a 32-yard gain. Three plays later Reid ran 29 yards to the Towanda 12.

Two plays after that Nichols ran it in from 8-yard out for their final score. Reid ran in the 2-point conversion to make it 35-0 with 50.6 left in the third.

There was no scoring in the fourth - Towanda’s defense did stop Athens from scoring from inside the 10-yard line, forcing them to turn it over on downs - as both teams gave their subs a chance get on the field.

Athens will hit the road again next week as they travel to South Williamsport. The Mounties just lost their second game in a row to Canton, and now 1-2, so they’ll be looking to get back to .500.

Athens returns to action Friday when it hosts South Williamsport.