MILLER LOOKING FOR WILDCATS' DEFENSE TO CARRY THEM AGAIN IN 2021 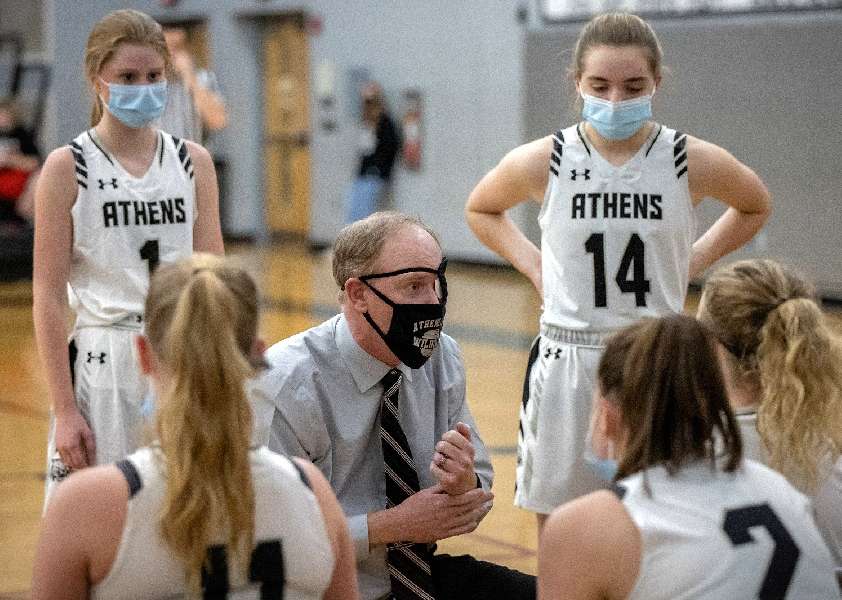 ATHENS — The Athens Lady Wildcats rode defense to an NTL Championship last year, and with a great deal of experience returning in 2021, coach Brian Miller said this year’s team will look to use the same formula.

“We are very good in half-court man-to-man defense — we are known for that,” said Miller. “We talk very well, we switch on screens, we hedge on screens … if you’re going to score on us, you’re going to earn the two points. We don’t make many mistakes in our half-court defense.

“We’re also known for running our sets in the half-court very well to get the best scoring opportunities.

“We’re not a run-and-gun team, and we’re not a pressing team, although with with (newcomers Emma) Bronson and (Karlee) Bartlow being so athletic, it gives us more speed on the floor, which may allow us to get out and press,” noted Miller. “We will trial-and-error that throughout the year, where we will pick our spots to press, but it’s not going to be 32 minutes of full-court pressing and fast-break offense.

“The reason we won last year is we were very, very good defensively,” Miller added. “We kept the score low, and we executed offensively.”

The Lady Wildcats, coming off a 22-6 season, return seniors Kayleigh Miller, who was NTL Player of the Year last year, and Megan Collins at guards, and senior Rachel Stephens and junior Caydence Macik, who is a two-time all-league performer, at forwards.

“The fifth starter will probably rotate throughout the year, depending on match-ups,” said Miller.

“Bronson and Bartlow are point guards who play good defense, and Blackman is a shut-down defender,” he noted. “If we need Hannah to start and shut someone down, it’s a good option to have.

Miller’s varsity numbers are down a bit, but says it hasn’t effected his team’s depth.

“Some of the girls are inexperienced,” said Miller. “Hopefully, the girls we have back are experienced enough, and I’m smart enough as a coach not to put those (inexperienced) girls in situations that are uncomfortable for them, until they start gaining confidence.

“I think our depth is fine,” added Miller. “We have scorers — and I think girls like Rachel Stephens and Megan (Collins) that really didn’t score in the past will step up their game. I’ve already seen them in practice look to be more offensive minded.”

“Both girls are in the tweener position — not really guards or post players,” said Miller. “But they can do a lot of good things. I feel comfortable putting them in to play defense, get some rebounds, and to run our plays and set screens for our scorers.”

Sophomore Natalie Watson will also vie for time in the low post.

“Natalie should give us some quality minutes in the paint,” said Miller. “She’s a presence and a good rebounder.”

One area that has Miller’s attention is point guard.

“I think right now point guard is my biggest source of concern,” he said. “I think we would have ironed that out over the spring and summer, but unfortunately Covid hit, so we really couldn’t figure out what was the best fit for the offense.

“It would have been nice to see how Emma Bronson and Karlee Bartlow progressed over the summer as varsity point guards. We’ll slowly get them in there and see how they do,” noted Miller. “If we have issues, we can always slide Kayleigh (Miller) to the point, but the best thing for the team is to keep her at the 2-guard.

“She’s a scorer, we want the ball in her hands,” continued Miller. “We want her to come off screens, run screen-and-rolls with Caydence (Macik) because (opposing teams) won’t double down on her with Kayleigh and Megan (Collins) on the perimeter, so that will give Caydence a lot of opportunities to score for us.”

AROUND THE NTL
“I would say it’s a three-team race in the Large School, and a one-horse race in the Small School,” said Miller.

Large School Division
“I would say Towanda returns the largest core of players from last year’s team,” said Miller. “They have a new coach in Rob Gentile, who has a great deal of experience, and a new system.

“Wyalusing is probably next in line,” he noted. “They have a good core group back.”

Small School Division
“Northeast Bradford is going to be the team to beat again with Lauryn Jones and Maisie Neuber,” said Miller. “I think Canton is the next best team in the division, and they lost their best player.