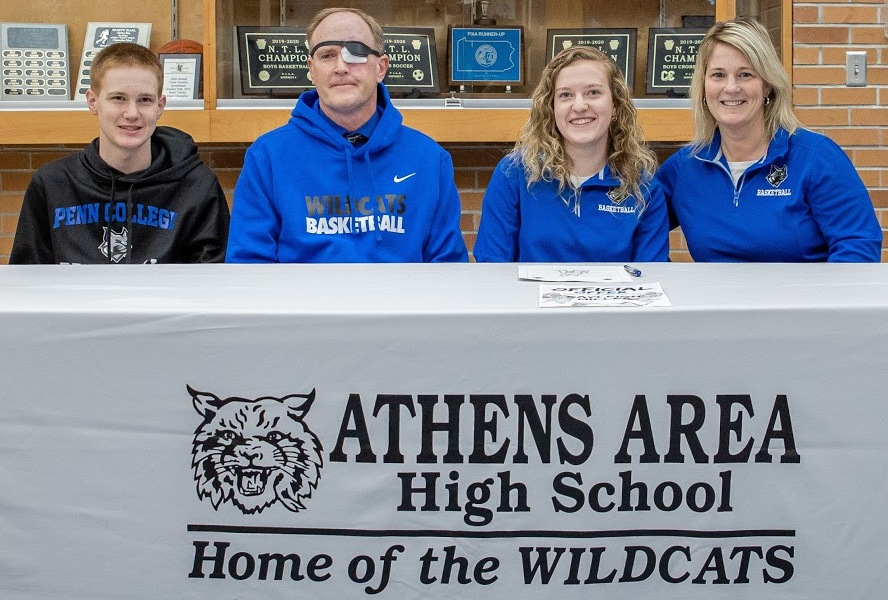 ATHENS — Athens senior Kayleigh Miller had plenty of options on where to play her four years of college basketball, but Pennsylvania College of Technology “felt like the right fit.”

Miller, with friends and family watching, signed her National Letter-of-Intent to attend Penn College Friday afternoon in a brief ceremony at the Athens Area High School.

“I visited a lot of colleges that were interested in me, but Penn Tech just felt right,” said Kayleigh Miller. “I just loved coach Brittany (Mohney) and coach Travis (Heap).

“I was there a little before Thanksgiving, and I was able to watch a practice. The players all seemed connected, and were there for each other,” she noted.

“They all loved the coaches, and I thought I could be a good fit there, too,” added Miller. “It really felt like a family.”

“It was difficult. Normally, I would have been able to go for an overnight visit, watch a game, and stay with the team, but their season was canceled, so I wasn’t able to see experience that.

“And, I really couldn’t get a feel for campus life. I walked around the campus, but there weren’t very many students there,” she said. “Yeah, I think Covid had an impact on the process, but Penn Tech still felt right.”

Another factor for Miller was Penn College’s proximity. Being located in Williamsport, it’s less than 90 minutes from the Valley.

“Being closer to home had a huge impact on my decision,” said Miller. “I want my friends and family to be able to come and watch me play at Penn Tech.”

Miller said she could see some playing time as a freshman for the Lady Wildcats.

“They didn’t guarantee anything, but said as long as I work hard and have a good attitude that anybody can get on the floor.”

Kayleigh Miller, a four-year starter for the Athens Lady Wildcats, played the final three years of her varsity career for her father — Brian Miller.

Coach Miller fought back some emotions during the ceremony.

“It’s bittersweet,” he said. “Seeing her grow up with the game … coming in as a fourth-grader, going to the Pink ‘Cats, the Waverly Basketball camps, then playing junior high, and AAUs, and playing for coach (Kelly) Burkhart, and then for me, and soon on to college.

“And seeing how hard she worked,” noted Brian Miller. “Nothing was given to her … she really had to work to be a good basketball player. She’s not the type of athlete that it comes naturally to … she’s worked at it, and watched and learned from other girls.

“She’s come a long way from a little twerp in fourth grade.

“I’m proud of her as a Dad, and as a coach, it’s the same thing,” he continued. “You see a player come in, and they want to live their dream and play college basketball at any level, that’s great.

“It takes a special person to make the type of commitment you need to play in college,” added Brian Miller.

Coach Miller believes Kayleigh will be successful at the next level.

“She’s a great shooter, and she really shares the ball well,” he said. “She’s a systems-type girl, so hopefully, Penn College has a system.

“(Penn Tech) is getting a player that wants to make her self better, and the team better,” he added. “She’s going to be an asset to the program.”

Coach Miller admits she still has work to do to be ready for next level.

“She probably needs to work on her speed and quickness,” he said. “When you get to the next level, everybody is fast, quick, and stronger. This summer, she’s going to hit the weight room and try to make herself bigger, stronger, and faster.

“And, she’ll need to fine-tune all her skills — ball-handling, driving to the basket, increasing her range as a jump shooter,” he added.

Kayleigh Miller also knows she has things to work on.

“I definitely need to work on driving to the basket, and drawing contact so I can get to the foul line,” she said. “Also, I’ll keep working on my outside shot because they need outside shooters. I need to make sure I can knock down the 3-point shot when I’m open.”

Kayleigh Miller said she’s like to stay involved in sports in the future.

“Right now, I’m planning on majoring in Marketing, with video editing skills for digital marketing,” she said. “I’d really like to work with sports, and edit highlight reels.”