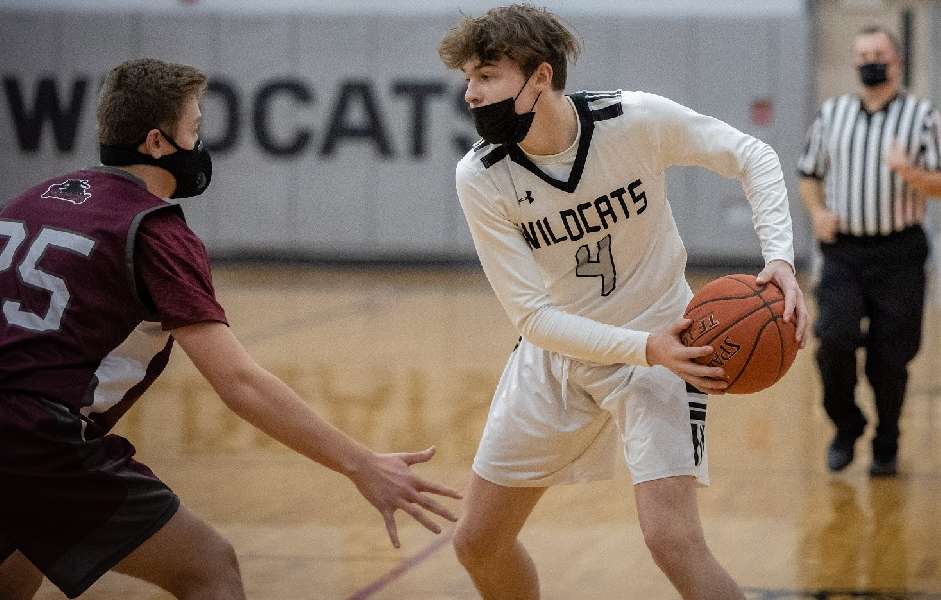 ATHENS – Going into Saturday’s NEB-Athens boys basketball contest both coaches were worried how much their respective teams might have left in the gas tank.

After all, just the night before, Northeast Bradford coach Paul Burgert had watched his Panther team erase an early 21-point deficit before eventually bowing to the undefeated Canton.

Athens coach Jim Lister cheered on his young Wildcat team as it overcame a fourth-quarter, 16-point deficit to take a hard-fought, one-point victory over Wellsboro.

Lister’s team had no letdown here as the Wildcats trailed just once – on the game’s opening basket – and scored a 65-56 win over the visiting Panthers.

J.J. Babcock’s 17 points led three Athens players in double-figures as the Wildcats improve to 3-2 on the year.

“I’ve been waiting for them to come out of their shell,” said Lister afterward. “Our last three games, we started slow. I’m happy we came right out at the opening tip.”

The Wildcats slowly built themselves a 21-14 advantage at the end of the opening eight minutes.

Employing some half-court trapping defense in the second quarter, the Wildcats were able to stretch their lead to 10 points – 34-24 – with a Babcock 3-pointer at the top of the circle.

Tucker Brown, off a steal of a Northeast inbounds pass, upped the gap to 12 before Lucas Crown answered for the Panthers. Another Babcock basket, with just four seconds remaining in the half, produced a 38-26 advantage at the break.

Babcock put together a seven of 11 outing from the floor as he produced a solid game from both the outside and taking the basketball to the bucket. He also would pull down nine rebounds.

“We didn’t handle their press well,” noted Burgert after watching his team commit 15 turnovers on the evening – 10 in the opening half. “That really took us out of our rhythm.”

Burgert added his Panther team is still learning how to play together.

“Lucas (Crown) is our one player returning with significant time from last year. We’re a new bunch of guys.”

Consecutive buckets from Mason Lister, Babcock and Shayne Reid, to open the third stanza, put the Athens lead at 44-26, while the Panthers went cold for the first 2:50.

Ethan Finch and Dan Seeley countered with back-to-back buckets for Northeast, but the Wildcats were calmly taking control.

There, the Panthers found some leftover energy as they attempted to claw their way back into the game. Twice they got the gap down to 12 points – the first on consecutive baskets by Crown and Nick Beers. However, the second time occurred too late in the game on another Seeley basket at 63-51.

Griffin Stein netted an Athens basket prior to consecutive Northeast buckets to close out the final seconds.

“I was more worried about what we would have left after Friday’s game with Canton,” added Burgert. “One thing about us is, you never have to worry about a lack of effort.”

Crown set the pace with 18 points for the Panthers, off to a 0-3 start on the season. Beers, in his first season with Northeast after North Rome elected not to have a basketball season, chipped in with 12 points and nine rebounds. Seeley finished with eight points and a game-high 13 rebounds. Finch totaled seven points.

Lister added 14 points and six rebounds for Athens. Brown, on a 6 of 7 outing from the field, netted 12 points, while Reid finished with eight. Carling set the pace with a team-high nine rebounds. Stein totaled seven points.

Athens now gets ready for a Monday night showdown with Valley rival Sayre on the Redskins’ home court.

“It’s Athens-Sayre,” noted Lister in taking a quick peak toward Monday. “Both teams will be ready to go.”