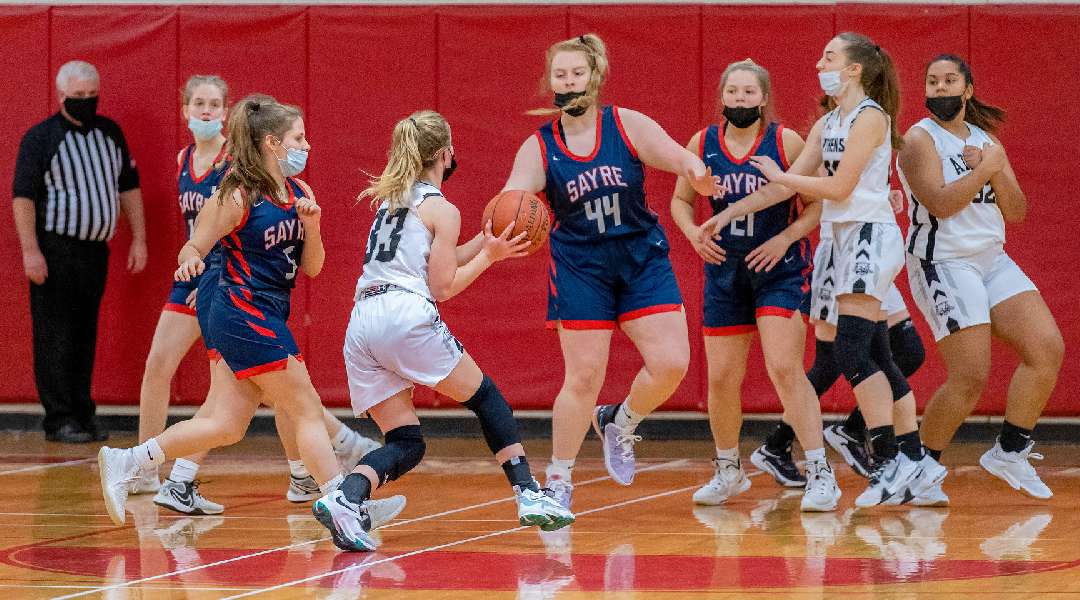 WAVERLY - Junior Karlee Bartlow and sophomore Mya Thompson sent short-handed Athens off to a fast start on its way to a 50-14 win over Sayre here Wednesday evening in the consolation game of the girls Valley Christmas Basketball Tournament.

"The kids stepped up and played well," said Athens coach Brian Miller. "Missing two starters, we had to play different positions on offense and defense, but the girls adjusted quite well.

"Mya Thompson played a well-rounded game, and Karlee Bartlow did a great job finishing at the basket," added Miller.

The Lady Redskins, who did not field a team in 2020 due to a lack of numbers, are 0-3, with two of those losses to Athens and the other to Towanda - the preseason favorites to battle for the NTL Large School title this year.

Longtime Sayre coach Eileen Sparduti is of the opinion "what doesn't kill you, makes you stronger."

"We made it," she said. "We survived maybe the toughest season opening we could have ever had.

"We were able to  work on our half-court defense tonight, which really improved," noted Sparduti. "That's not reflected in the score because many of their points were scored off our ball-handling errors.

"Offensively, we are still adjusting to the speed and pressure of varsity play and are still too hesitant about attacking, but that will come.

"Next week, we will see what we benefited from in these "˜trials by fire,'" added Sparduti. "It certainly did not consume us."

Karlee Bartlow netted 10 points and Thompson added six to fuel an 18-4 run in the first eight minutes for the Lady Wildcats, who were playing without seniors Caydence Macik and Olivia Bartlow.

Six different Lady Wildcats put their names in the scoring column in the second quarter, led by four points apiece from Bartlow and freshman Addy Wheeler, in a 16-6 run that extended the lead to 34-10.