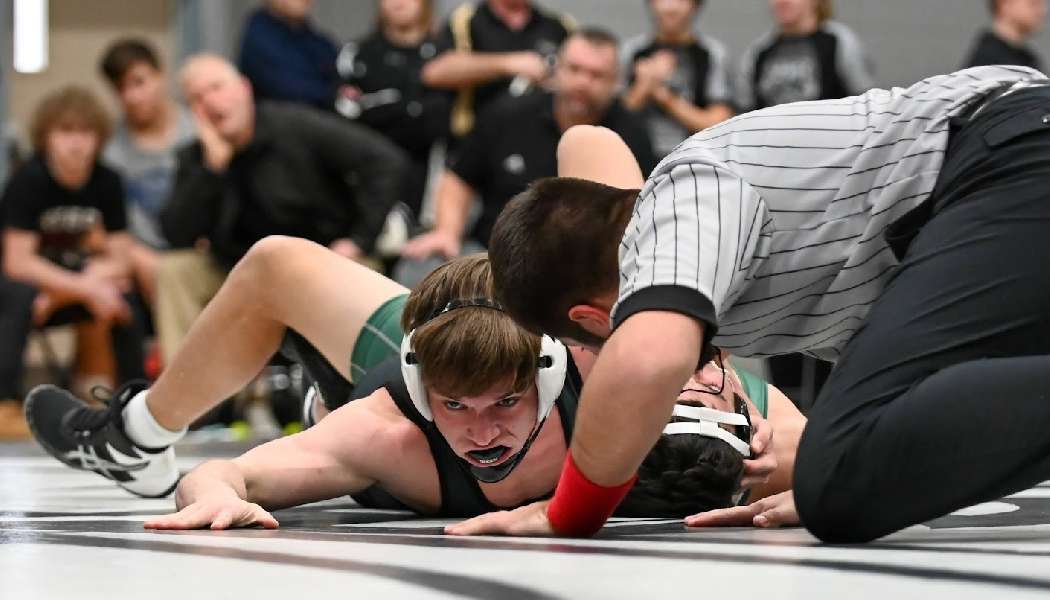 "It is what it is," said Athens coach Shawn Bradley. "Jake (Courtney) is still banged up, and Mason (Vanderpool) is sick ... the kids wrestled well.

"We had some kids step up, kids maybe we weren't expecting to," he noted. "(Freshman) Keaton (Sinsabaugh) in the Williamson match - that's a big win, (Chelsea Hungerford) is pretty good. He wrestled his butt off, hit some nice techniques, and did a nice job.

"And another freshman, Caleb Nason, is wrestling a kid (Mikey Sipps), who is probably Top 10 in the state," continued Bradley. "It was a 2-point match after the first period ... he did great.

"It always stinks to lose, but we wrestled better today than we did yesterday," added Bradley. "It's a good way to end the first half of the season. Now, we take a little break, and come back for a really difficult second half."

Athens was also without its 132-pounder, who recently left the team.

The Wildcats opened the day with a 58-6 win over Wellsboro, which doubled as the NTL dual for the two league rivals, then dropped a 39-36 decision to Scranton in the semifinals.

Athens topped Williamson, 35-31, in the third-place match, while Scranton dropped a 39-30 decision to Western Wayne in the championship match.

ATHENS 60, Wellsboro 6
The Wildcats registered 10 falls, including six first-period pins, in a 60-6 win over Wellsboro in the opening round of the Wildcat duals.

Senior Kaden Setzer had the quickest fall of the day, just 13 seconds at 138 pounds, while senior Karter Rude needed just 23 seconds in his 160-pound bout..

Senior Gavin Bradley (43 seconds at 126), sophomore Josh Nittinger (49 seconds at 285), and senior Lucas Forbes (53 seconds at 152) all needed less than one minute to put six points on the board. Senior Gavin McGrath had the sixth first-period pin, scoring the fall in 1:21 at 145 pounds.

Semifinals
SCRANTON 39, ATHENS 36
Athens won five of the nine contested weight classes, but Scranton capitalized on a 12-point advantage in forfeits to pull out a 39-36 decision over Athens in the semifinals.

Following a Scranton fall at 145, Forbes and Rude scored first-period pins to give the Wildcats an 18-12 lead.

However, Scranton picked up a forfeit at 126 to close out thematic and earn the win.

Third-Place Match
Athens 35, Williamson 31
Sinsabaugh scored a third-period fall to effectively clinch a 35-31 win over Williamson in the third-place match.

With Athens trailing 25-23, Sinsabaugh built a lead against Chelsea Hungerford in their 113-pound bout, then turned her to her back with just 48 seconds remaining in the third period for the fall to put the Wildcats ahead, 29-25.

Bradley received a forfeit at 120, and Athens issued six free points at 126 to provide the final matching.

Setzer opened the match with a 16-1 technical fall of Ayden Sprague, scoring the bout-ending takedown with just 1 second remaining in the third period.

Joe Hultz put the Warriors on the board again with a hard-fought, 7-4, decision over Whitmarsh to trim the deficit to 17-9.

Rosh won a physical battle with Tim Freeman at 189 pounds, turning the Williamson freshman to his back at 5:47 for the fall, and a 23-9 Athens lead.

Williamson's big boys Mikey Sipps and Kade Sottolano put 10 points on the board for the Warriors.

Sipps forged a 16-2 manor decision over Nason, but Bradley was impressed with his freshman's efforts.

Sottolano followed with a 69-second pin of Nittinger to trim the deficit to 23-19, and Williamson took a forfeit at 106 to take a 25-23 lead, and set up Sinsabaugh's heroics.