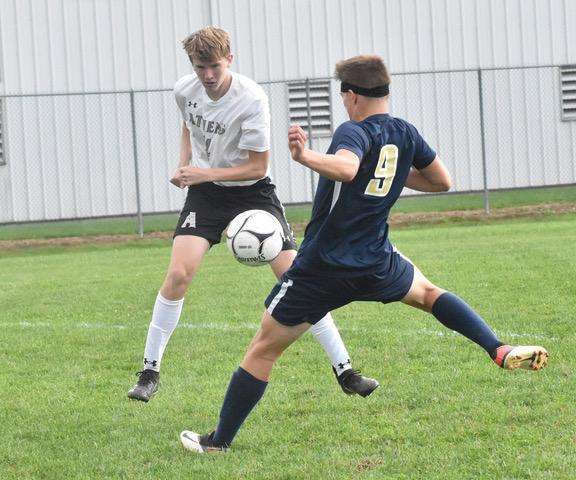 “It’s a good win after Tuesday,” said Athens coach Jake Lezak in reference to the Wildcats’ 5-3 home loss to Wellsboro.

“We know we need to win out (in the league),” he added. “I hope this (win) helps the guys settle down, and get focused.”

Van Holden’s first varsity hat trick made for a “good birthday present for him,” said Lezak.

“He definitely gave us a spark,” noted Lezak. “We know he’s capable of doing just what he did tonight.

“He very much doesn’t give himself enough credit,” continued Lezak. “Before the game we talked about what we needed him to do.

“In the first half, it was a different position for him, we didn’t train him there, but he has a high soccer IQ, he understands the game very well,” added Lezak. “We talked at the half … getting him to make adjustments, and he went out and did it.”

VanHolden scored midway through the first half to give the Wildcats a 1-0 lead, which it would take into the half.

The Wildcats put the game out of reach quickly in the second half. Van Holden scored another unassisted goal two minutes after the intermission, then scored again about four minutes later, off a feed from senior Mason Hughey, to make it 3-0.

Sophomore Korey Miller scored twice in a 2 1/2-minute span to give Athens a 5-0 lead with 26:06 remanning in the game. The first goal was assisted by junior Brayden Post, and the second by Hughey.

With 17:04 remaining in the match, Hughey capped the scoring, off an assist from Van Holden.

The Wildcats were playing without their leading scorer, and Lezak said that played a part in their slow start.

“We didn’t have Nate Quinn tonight, so we shuffled a couple of guys around,” he said. “It took them a while to get settled in, in the first half.

“We were putting some good pressure on, but we weren’t being really dangerous,” Lezak noted. “We were taking a lot of shots, and they were all on target … we had some good chances in the first half.

“We talked about what we needed to do at halftime, and the guys adjusted … and they responded the right way,” Lezak added.

Athens had a 22-3 advantage in shots-on-goal, while both teams had three corner kicks.

Grant Liechty had three saves in net for the Wildcats.