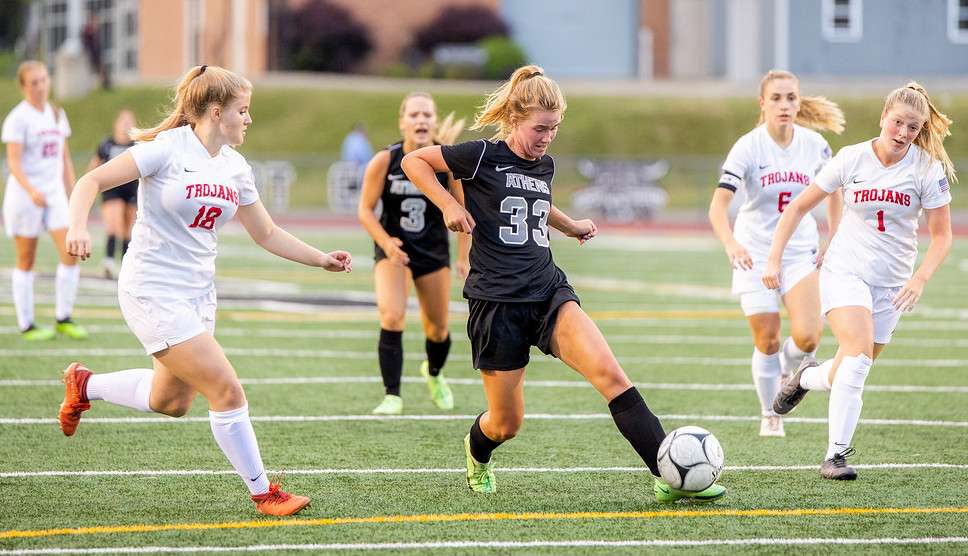 ATHENS — Junior Alli Thoman scored a pair of goals early in the second half to lift Athens to a come-from-behind, 3-2, win over Troy here Monday evening in a key early-season NTL girls soccer match-up.

“That was a huge win tonight,” said Athens coach Rich Pitts. “We needed the win to set the tone in our conference as the NTL is important for us each year.

“We have a ton of respect for Troy and knew they would come to battle,” he noted.

“I thought every girl stepped up, and played their heart out for 80 minutes,” added Pitts. “We played our way into the game a bit, but hit our stride as the game went on.”

Senior Hannah Walker gave the Lady Wildcats the early lead with a goal about 13 1/2 minutes into the game. The goal was set up by Thoman and freshman Addy Wheeler, who were both credited with assists.

About six minutes later, Addy Parker scored off a feed from Camille McRoberts to tie the game at 1-1.

Two minutes after that, McRoberts found the net from long distance to give the Lady Trojans a 2-1 lead.

About 3 minutes into the second half, senior defender Caydence Macik fed Thoman, and she fired a shot into the net to tie the game at 2-2.

With 24:38 remaining in the contest, Thoman took a cross from Walker and found the net again to give the Lady Wildcats a 3-2 lead.

Athens continued to pressure the Troy net, but keeper Madelyn Seeley was up to the task.

Junior Karlee Bartlow had 10 saves in net for Athens, and Seeley had seven for Troy.

Pitts was pleased with his team’s performance.

“I was really pleased with Karlee (Bartlow) in goal. She made some incredible saves,” he said. “The back four — Mia Robinson Caydence (Macik), Kaylee (Grazul), and Taegan Williams — was really sound.

“And up top, (Hannah) Walker and Alli (Thoman) created really good mismatches in how they played together,” Pitts added.