TOP-SEEDED DANVILLE TOO MUCH FOR ATHENS IN CLASS AAAA SEMIFINALS 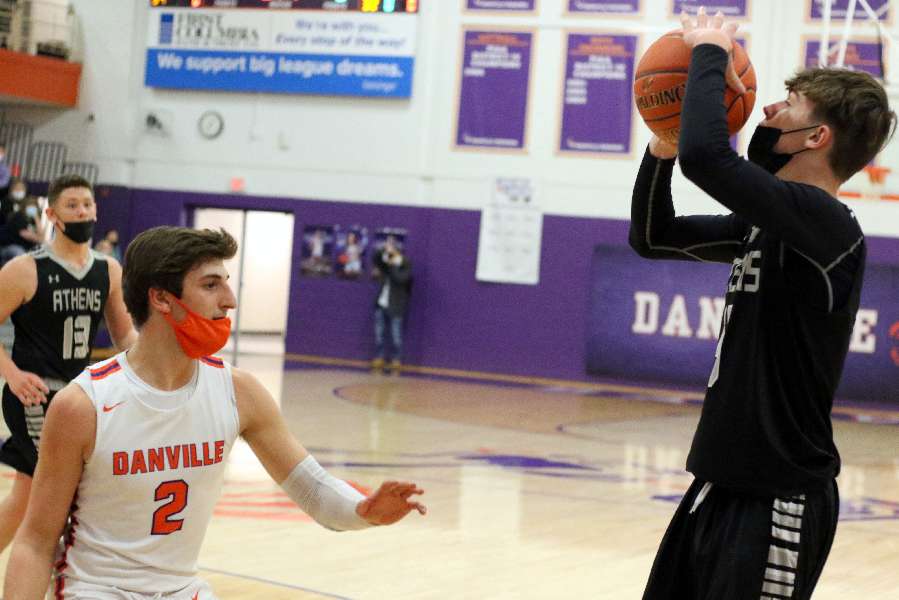 DANVILLE — Dante Harward and Jagger Dressler combined for 40 first-half points to lead Danville in an 86-39 win over Athens here Tuesday in the semifinals of the District 4, Class AAAA boys basketball playoffs.

First-year Athens coach Jim Lister could do nothing but praise Danville’s senior-laden team, which improves to 15-1 on the season, after the win.

“(Danville) is just a tremendous basketball team,” he said. “I told the kids when we came out here tonight, that we would have to play A-plus basketball.

“There isn’t a superstar on that team, there are just five really good basketball players,” noted Lister. “They play great team basketball, they move well, and when they get looks, they bury the shots.

“They have a great shot at winning the strict title on Saturday,” he added.

Harward pumped in a trio of 3-pointers and scored 13 points in the first quarter, and Dressler added seven points to help the Ironmen to a 24-8 lead after the first eight minutes.

Danville jumped out to a quick 7-2 lead, but buckets by junior Troy Pritchard and sophomore Mason Lister, sandwiched around a score by K.J. Riley trimmed the deficit to 9-6, but the Ironmen took control with a 13-0 run to take a 22-6 lead.

Harward canned two more 3-pointers and scored 10 points in the second quarter, and Dressler added nine points, including a 3-pointer and an old-fashioned three-point play, as Danville outscored Athens 26-17 to take a 50-25 lead at the intermission.

The Wildcats trimmed the deficit to 12 points on a couple occasions in the second quarter, the last being at 29-17, but the Ironmen used a 16-2 blitz to blow the game open and take a 47-19 lead with 1:35 left in the first half.

Lister said his defense had no answers for the Ironmen.

“We came out trying to play man-to-man defense,” he said. “They screened well, and they don’t need much room to bury the shots, so they were running off their screens well, and they ran their offense well.

“Some of the shots were contested, and they still made them.

“It’s just a good basketball team,” added Lister. “They are solid fundamentally, and they took it to us.”

Lister also noted his team didn’t adjust to the physicality of the game.

“(Danville) plays very good defense,” he said. “They are right in your grill, and their hands are busy.

“And (the officials) let you play down here,” noted Lister. “You get away with a lot more here the you do (in the NTL); and that’s something we have to get use to.

“I told the kids at the beginning, ‘you can’t let their physicality get in your head. You have to play the game the same way,’” added Lister. “Maybe it did get in our head a little bit.”

Junior J.J. Babcock scored 15 of the Wildcats’ 25 points in the first half, including 13 points int he second quarter.

After trading buckets for the opening minute of the second half, Danville scored 11 straight points to take a 63-31 lead with 1:15 left in the third quarter.

The Wildcats end the season at 14-10. They lose just two seniors — Jon Smith and James Benninger-Jones, but Lister said they will be missed.

“Our two seniors are great role models for us,” said Lister.

“They knew their roles this year,” he noted. “They came to every practice, and they busted their ass every single night. They worked hard to make us better.

“I’m real proud of our seniors,” added Lister. “They are a pleasure to be around, they’re great kids, and I’m positive they will do very well in life.”