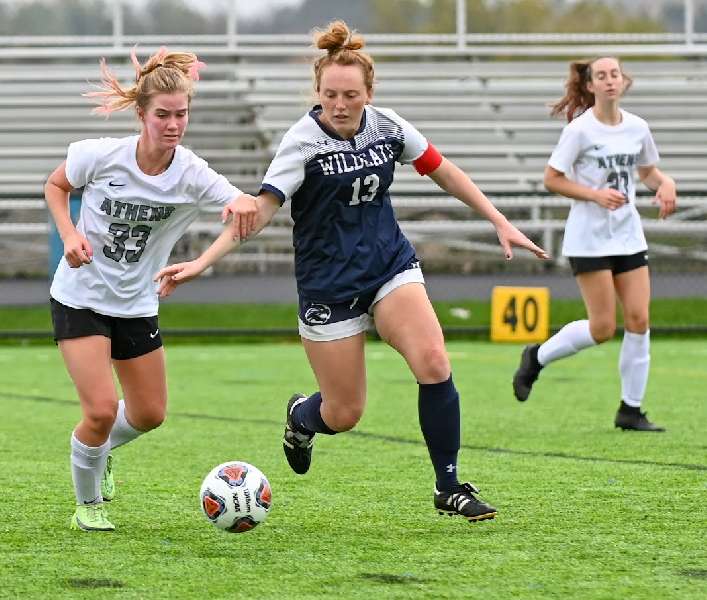 MIDDLEBURG — Top-seeded Mifflinburg scored four first-half goals, and tacked on four more in the second half in an 8-0 win over fourth-seeded Athens here Saturday afternoon in the semifinals of the District 4, Class AAA girls soccer playoffs at Midd-West High School.

“We knew what we were coming up against,” said Athens coach Rich Pitts. “They’re a pretty talented team, they have a number of travel players.”

Pitts said the biggest challenge was matching Miff’s speed of play early in the game.

“I knew MIfflinburg was good,” he said. “The speed of play, we’ve seen it in some of our non-conference games. I just wanted the girls to work their way into the game, catch up to the speed of the game, and I thought they did.

“The question was, can we win a ball, get possession and move forward?“ he noted. “Can we work our way into the game, get on our front foot in the attacking end? I thought we did it.

“Even though the ball was in our end a ton, I didn’t think there was a ton of dangerous stuff.

“We got in their end, and couldn’t be clinical enough to finish,” Pitts continued. “We weren’t able to attack with enough numbers to sustain anything in their end.

“I think if we had been a little more aggressive when we did get it down there, I think we could have created a few more chances,” added Pitts.

Sarah Fritz gave Mifflinburg a 1-0 lead about 12 minutes into the game, then scored again about 5 1/2 minutes later on a hard shot that squirted through the hands of Athens keeper junior Karlee Bartlow.

Bartlow redeemed herself a few minutes later with a nice save on a 1-v-1.

Peyton Yocum converted a nice cross from Emily Walls with 16:09 remaining before the intermission to make it 3-0, and Taylor Beachy capped the first-half scoring with a shot from 35 yards out two minutes later.

Beachy scored twice in a 5 1/2-minute span midway through the second half to complete her hat trick, and extend the lead to 6-0 with 16:29 left in game.

Walls made it 7-0 about 2 1/2 minutes later, and Yocum capped the scoring with 8:45 remaining in the contest.

Mifflinburg improves to 18-1, while Athens wraps up the season with a 9-9 record.

Following the loss, Pitts reflected on the season.

“I thought (Hannah) Walker was a huge leader for us this year,” he said. “She plays defender for her club team, but I can put her anywhere. She’s had a stellar career here.

“I think Addison Wheeler is the best freshman I’ve had. In terms of how she acclimated herself, and took charge in the middle, I think she’s brilliant.

“We  were missing (Emma) Yohe because she got hurt, but having the Sayre girls has been big for us,” noted Pitts. “Kendra Merrill played tons of minutes, I don’t know if we would have been the same team without her.”

Pitts said the biggest addition to this year’s team came after preseason camp was already under way.

“I asked Caydence (Macik) which basketball player wasn’t playing a fall sport, and Karlee (Bartlow) got the call.

“Karlee came in and worked and worked, and worked,” said Pitts. “Today was her 18th game ever of playing soccer in her life.

“That girls is all heart,” added Pitts. “That scoreboard today does not say what (Karlee Bartlow) has done for us, stepping into a tough position and doing a fantastic job.”