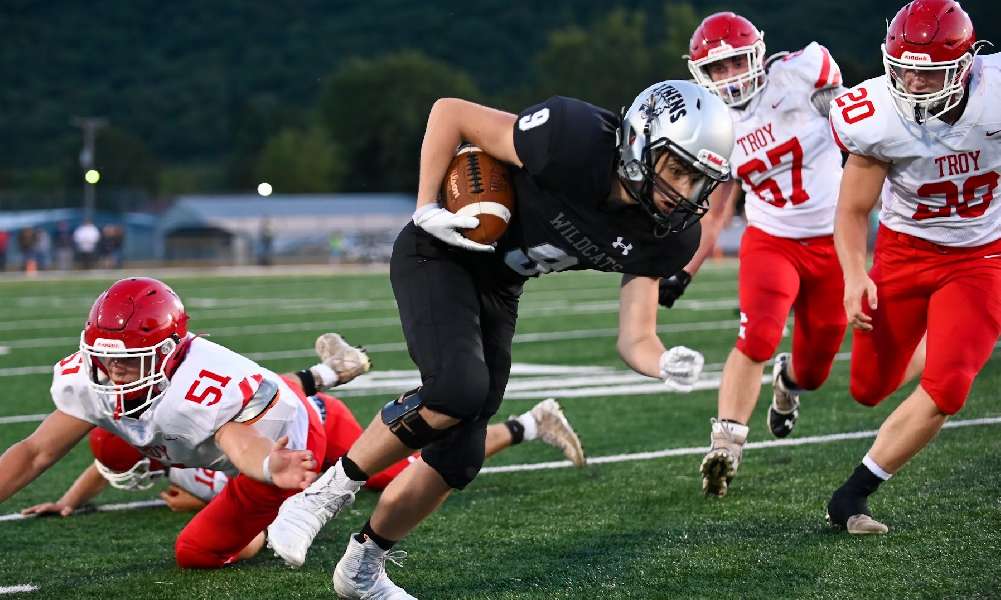 ATHENS — The Troy offense played keep away for the majority of the game, and the Trojan defense forced a pair of key first-half turnovers in a 13-0 win over Athens here Friday night in a key early-season NTL Large School Division football match-up at Alumni Stadium.

The Trojans ran 32 offensive plays in the first half, compared to just 14 for the Wildcats.

“(Troy) just lined up and ran it right at us,” said Athens coach Jack Young. “It was dive, it was iso, and it was toss.

“It’s pretty simple,” he said. “They just pounded the ball on the ground and kept it away from us for large chunks of time.

Young was pleased with his team’s defensive performance.

“I couldn’t be more proud of the way our kids showed up and played.

“We played a really solid defensive game,” said Young. “We had one breakdown in the first half, it probably should have been 0-0 at halftime.

“In the second half, we just a couple of mistakes that beat us,” he added. “We played physical. We got after it.”

The Wildcats gained 114 yards on the ground on 25 carries, with senior Shayne Reid’s 80 yards on 10 carries leading the way.

Lister completed 11 of 19 passes for 79 yards. Reid had three catches for 21 yards, while freshman Kolsen Keathley had three receptions for 19 yards, and junior J.J. Babcock added two grabs for 27 yards.

“It seemed that every time we got something going offensively, one of those three things got us,” he added.

The Trojans turned the ball over on down on the opening possession of the game when senior Damien Landon was stopped short of the first-down marker on 4th-and-2 at the Troy 43.

After one first down, Troy faced a fourth-and-four at its own 38, but a 23-yard run by Landon on a fake punt kept the drive alive and moved the ball to the Athens 39.

Four plays later, Landon bulled ahead for eight yards to give the Trojans a second-and-2 at the Athens 18, but following an illegal procedure call against the Trojans, the drive stalled and the Wildcats took over on downs at their 21.

Two plays later, Reid broke free for 17 yards, but coughed the ball up, and Troy recovered at the Wildcat 41.

The Troy drive started poorly with a botched snap, and Landon needed a 3-yard pickup on fourth-and-2 at the Wildcat 33 to keep the drive alive.

On fourth-and-four at the Athens 13, sophomore Clayton Smith found junior Justice Chimics open for a 13-yard TD pass to give Troy a 6-0 lead with 7:02 remaining in the first half.

The Wildcats moved the ball to midfield on their next possession, but were forced to punt. Junior Caleb Nichols pinned the Trojans at their own 2 with a 48-yard punt.

The Athens defense forced a three-and-out, and the Wildcats took over at their own 38 with 1:54 remaining in the first half.

Lister connected with the 6-5 Babcock for a 24-yard gain to the Troy 14 on the Wildcats’ first play, but they coughed the ball up and the Trojans recovered at the 17 on the next play.

The Wildcats opened the second half with the ball, and drove to the Troy 29, thanks in large part to 26 yards on five carries by Reid, before turning the ball over on downs.

After an exchange of punts, Troy took over at its own 20 with 11:12 remaining in the contest.

A 29-yard run by Smith on Troy’s fourth play moved the ball to the Athens 40, and three plays later, Chimics broke loose on a 36-yard TD run to give the Trojans a 12-0 lead with 7:35 remaining in the game.

Keathley ripped off a 23-yard run on Athens’ first play of its ensuing possession, and Lister gained 13 yards on two carries to move the ball to the Troy 33, but the drive stalled out at the Trojan 29 with 6:12 remaining in the game.

After Troy punted the ball away, Athens moved the ball to midfield, but Troy standout lineman Mason Imbt registered a QB sack for a 15-yard loss, and the Wildcats possession ended on down two plays later.

Troy pounded out 247 rushing yards on 49 carries, with Landon and Smith leading the way. Landon gained 96 yards on 24 carries, and Smith added 95 yards on 16 carries. Chimics chipped in with 42 yards and one TD on three carries.